Worldwide recognition of declining amphibian species and populations has led the Department ofthe Interior (DOI) to establish the Amphibian Research and Monitoring Initiative (ARMI). This program of amphibian monitoring, research and conservation began in 2000. The U.S. Geological Survey (USGS), the science and research bureau for DOI, was given lead responsibility for planning and organizing the program in cooperation with the National Park Service, Fish and Wildlife Service, and Bureau of Land Management.Monitoring studies at a moderate number of parks or refuges across the region where amphibian habitats are sampled and inferences drawn about the occurrences of select species within the area. The state variable of interest is the probability of occupancy.

The loss of small, seasonal wetlands is a major concern for state, local, and federal organizations in the northeastern US. Identifying and estimating the number of vernal pools within a given region is critical to developing long-term conservation and management strategies for these unique habitats and their faunal communities. Ideally, any program whose goals are to conserve, monitor, and protect vernal pool habitat would utilize a sampling method that: 1) identifies and locates a subset of vernal pools (i.e., a sample) from which an unbiased estimate of the total amount of vernal pool habitat can be obtained, and 2) serves as a representative sample from which inference can be made about the status of vernal pool-breeding species.

Amphibians are a priority taxonomic group for the National Parks Service Inventory and Monitoring program. The goals of this program are to determine whether the integrity and status of amphibian populations are changing over time. Amphibian monitoring was initiated in 2005, and is currently concentrated in 8 parks within the National Capital Region.  Wetlands within each park are visited up to 3 times per year to gain a broad view into the variety and associated life stage of each observed species.

Research projects are detailed investigations of specific factors which mayaffect the distribution or abundance of amphibians, and are conducted in National Parks or National Wildlife Refuges. Two areas of research interest are in understanding how animals move within stream networks, and how to identify the best management alternatives for amphibian populations and habitats.

Assessing disease risk in the Northeast

We have sampled for two diseases, Ranavirus and frog chytrid (Batrochytrium dendrobatidis, or Bd) on multiple refuges in the Northeast in conjunction with an analysis of soil contaminants to determine if local site factors can predict likelihood of disease outbreaks. An emerging fungal pathogen, Batrachochytrium salamandrivorans (Bsal), has caused mass mortality events and severe population declines in European salamanders via introduction into wild populations from the pet trade. Introduction of this pathogen to North America could be devastating, not only to local populations but also to global salamander biodiversity. ARMI is working collaboratively nationwide to determine the presence of Bsal in North American salamander populations in locations with increased risk of exposure to the Bsal pathogen.

In order for resource managers at Shenandoah National Park to implement long-term monitoring for the federally-endangered Shenandoah salamander, Plethodon shenandoah, absolute certain identification of the species in the field is critical. Researchers have observed wide variation in color morphology of a similar species, Plethodon cinereus, in the park, particularly when comparing high elevation areas with other, lower elevation sites. The possibility of misidentification presents a major concern for research and monitoring efforts. We will incorporate genetic verification with field-based species determination based on a suite of morphological characters, allowing us to estimate the probability of misidentification in previously collected data, as well as develop methods to account for and reduce the probability of these errors in future research and monitoring efforts.

PARTNERSHIPS: Research and monitoring is often in collaboration with other scientists, including colleagues from other USGS science centers, professors and students (Towson University, University of Maryland, University of Montana), resource managers at federal agencies (Park Service, Fish and Wildlife Service). 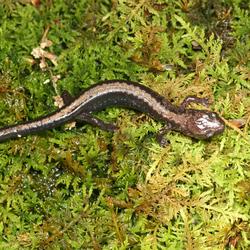 Managing the Extinction Risk of the Shenandoah Salamander

The Shenandoah salamander is an endangered salamander that is at risk of extinction due to its small, high-elevation range, competition with the co-occurring red-backed salamander, and the predicted future climate in the Appalachian mountain range. We are working with multiple partners to understand the current status of the species, predict future extinction risk, and engage stakeholders in a...
By
Ecosystems, Species Management Research Program, Eastern Ecological Science Center
link
December 9, 2016

Managing the Extinction Risk of the Shenandoah Salamander

The Shenandoah salamander is an endangered salamander that is at risk of extinction due to its small, high-elevation range, competition with the co-occurring red-backed salamander, and the predicted future climate in the Appalachian mountain range. We are working with multiple partners to understand the current status of the species, predict future extinction risk, and engage stakeholders in a...
Learn More

Since amphibian declines were first proposed as a global phenomenon over a quarter century ago, the conservation community has made little progress in halting or reversing these trends. The early search for a “smoking gun” was replaced with the expectation that declines are caused by multiple drivers. While field observations and experiments have identified factors leading to increased local extin
By
Ecosystems, Eastern Ecological Science Center, Patuxent Wildlife Research Center, Wetland and Aquatic Research Center , Forest and Rangeland Ecosystem Science Center, John Wesley Powell Center for Analysis and Synthesis
February 17, 2016

A newly identified fungal pathogen, Batrachochytrium salamandrivorans (Bsal), is responsible for mass mortality events and severe population declines in European salamanders. The eastern USA has the highest diversity of salamanders in the world and the introduction of this pathogen is likely to be devastating. Although data are inevitably limited for new pathogens, disease-risk assessments use bes
By
Ecosystems, National Wildlife Health Center
January 20, 2016

Trends in amphibian occupancy in the United States

Though a third of amphibian species worldwide are thought to be imperiled, existing assessments simply categorize extinction risk, providing little information on the rate of population losses. We conducted the first analysis of the rate of change in the probability that amphibians occupy ponds and other comparable habitat features across the United States. We found that overall occupancy by amphi
By
Ecosystems, Forest and Rangeland Ecosystem Science Center, Wetland and Aquatic Research Center