For classes in the SAHM/Vis-trails software, please contact Catherine Jarnevich. The Resource for Advanced Modeling room is located within the USGS Fort Collins Science Center in Fort Collins, CO. 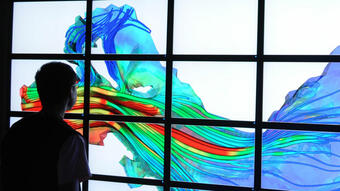 In 2009, the USGS Fort Collins Science Center renovated its Resource for Advanced Modeling (RAM), a modeling facility for collaborative research within the USGS and the wider research community. The main purpose of the RAM is to bring together remote sensing and climate forecasting experts, habitat modelers, field ecologists, and land managers in a synergistic environment.

The RAM provides a collaborative working environment for up to 20 scientists, supported with networked, wireless computing capability for running and testing various scientific models (e.g., various species distribution models) at a variety of spatial scales, from county to global levels. Models use predictor layers that can include current and future climate layers (near- and long-term projections), remote-sensing derivatives (such as MODIS phenology metrics), land cover, topography, and anthropogenic features.

The RAM works with a variety of clients from various government and non-government agencies from the national to local level.  Those interested in having a RAM session should contact Catherine Jarnevich.

The “VisWall,” a bank of 24 wall-mounted monitors in a 6x4 array, can be used for displaying large or numerous GIS datasets, photos, or other data products. The monitor array can be configured to show a single map spread across all 24 monitors, 24 individual monitor outputs, or a combination of intermediate-sized outputs, such as three 4x2-monitor maps. Investigative teams and working groups using the RAM can employ VisWall for demonstrations and robust data exploration.

In addition, the RAM offers WebEx and phone conferencing capability, a SMART board with screen-capture capability, white boards, and wireless internet. The collaborative workroom’s projection system can quickly alternate between 6 laptops to project their content. The RAM also host several computers, totaling 132 cores, each with at least 2 GB of RAM per core.  There is a separate work area and a small lounge for break-out discussions.

The RAM is equipped with a modeling program called the Software for Assisted Habitat Modeling (SAHM). The software was created to both expedite habitat modeling and help maintain a record of the various input data, pre- and post-processing steps and modeling options incorporated in the construction of a species distribution model and is a set of modules within the established workflow management and visualization VisTrails software.  SAHM is used to create habitat suitability models for species of management interest. The code provides a significant capability to run, in a consistent and repeatable manner, five different habitat models (Maxent, Boosted Regression Trees, Logistic Regression, Multivariate Adaptive Regression Splines, and Random Forest) along with allowing user’s to define response curves themselves to develop a model.  Details are included in the paper by Morisette et al., linked below.

SAHM combines predictor layers (environmental raster data layers of the study area, such as those available in the RAM) with user-collected field sampling measurements for a particular species. The program uses these data to run statistical models that analyze habitat requirements of a species of interest and predict the potential distribution based on habitat suitability. Model outputs can help users, such as land and natural resource managers, generate predictive maps or reports to aid in predicting and managing the spread of invasive species.

SAHM is freely available to interested parties.  The RAM also can host a two day training session based on need that is also free to attend. SAHM Fact Sheet

In November 2012, the Fort Collins Science Center (FORT) officially implemented a powerful new capability within its Resource for Advanced Modeling: a bank of 24 wall-mounted, 27-inch monitors, arrayed 6 across and 4 high, that can be used for displaying large or numerous GIS datasets, photos, or other data products. This visualization wall, or “VisWall” for short, was built to support interactive exploration of model input and model output. The 6x4 VisWall monitor array can be configured to show a single map spread across all 24 monitors, 24 individual monitor outputs (Fig. 1), or a combination of intermediate-sized outputs, such as six 2x2- or three 4x2- monitor maps (Fig. 2).

The software used to run the displays—a combination of VisTrails1 and a VisWall package developed here at FORT—is relatively user friendly and easy to get started with. The 6x4 array of monitors can be used to explore and visualize differences across two variables—for example, showing habitat maps for 4 different species as they might change across 6 different time steps. Alternatively, using all 24 monitors to show one image enhances the display resolution well beyond that of the standard LCD projector, from the approximately 2 million pixels of a standard LCD projector to 50 million pixels for VisWall. The number of pixels directly relates to the resolution at which map output can be displayed. For example, the VisWall can display every pixel in a map of the 48 contiguous states of the U.S. with 1-km pixels. A region encompassing the western half of the United States, presented in a 4x2 array, can display at approximately 600-m resolution (Fig. 3). For a state-level map, the VisWall can show the area at roughly a 90-m resolution.

VisWall is an outgrowth of a FORT-hosted, joint project with the U.S. Department of the Interior (DOI) and NASA to use FORT’s Resource for Advanced Modeling (RAM) to connect climate drivers to biological responses. To that end, a primary objective of the project is to support and enhance computational and visualization capabilities at the RAM. The project’s primary client is the DOI North Central Climate Science Center, located at Colorado State University; however, VisWall is available to FORT scientists and RAM clientele, any of whom can take advantage of VisWall for data exploration.