Landsat satellites provide high-quality, multi-spectral imagery of the surface of the Earth. These moderate-resolution, remotely sensed images are not just pictures, but contain many layers of data collected at different points along the visible and invisible light spectrum.

Morocco’s irrigation systems and water-allocation methods. Eighty-five percent of the water in Morocco is consumed by irrigated agriculture. Increases in population and drought seasons have made it difficult for Morocco to use reservoirs and irrigation infrastructure. Groundwater has been relied on extensively by irrigators to meet their water demand. The increase in groundwater pumping leads to a rapid decrease of the water tables.

Australia’s agricultural industry has evolved significantly within the last decade. Change in agriculture, whether it is an increase in land used for production or the types of crops being produced, has an impact on land-cover soil properties and water availability. Landsat imagery is used in monitoring irrigation areas and dry land agricultural areas to detect changes in agricultural practices over time. Additionally, land cover is also used in benchmarking of water-use efficiency which supports irrigation water management at the catchment level.

Monitoring consumptive water use is an important component of global agricultural monitoring (Curt Reynolds, USDA FAS, written commun. and oral commun., 2014), as a majority of global production relies at least in part on irrigation for crop production (fig. 1). Globally, irrigated agriculture supports production of about half of the world’s food supply (Thenkabail and others, 2010). In the United States (U.S.), agriculture accounts for around 80 percent of consumptive water, reaching upwards of 90 percent in many western states (USDA Economic Research Service, 2014).

Farmers have long known that not all areas in a field produce the same yield, yet the ability to measure and map this variability is a fairly recent arrival in agronomic management. The practice of measuring and mapping yield limiting variables throughout a field is generally referred to as zone mapping (Zhang and others, 2010). Zone maps are used to identify areas within a field that express a similar composition of one or more factors, including soil properties (structure, organic content, depth, and drainage), nutrient levels, topography (flatland, rolling hills), and historic crop growth and yield. A prerequisite to mapping these factors is the ability to accurately and consistently measure them at a high enough resolution to be able to rectify differences at the sub-field level. Multi-spectral sensors such as the Operational Land Imager (OLI) aboard Landsat 8 and the previous generation Enhanced Thematic Mapper Plus (ETM+) aboard Landsat 7 have proved exceptionally capable in this regard.

In 2009, Snake River Farm, a trout farm owned by Clear Springs Foods, Inc., in Snake River Canyon saw a decrease in surface water from springs and sought curtailment of junior groundwater pumping. In this case, the Director of IDWR found that Clear Springs was materially injured by junior groundwater pumping and ordered curtailment. Landsat imagery processed with METRIC was used to establish water budgets to assess depletions versus recharge. For recharge estimates, both evapotranspiration and surface-water diversion return flows were used. In response to the finding of material injury, groundwater irrigators in the affected area developed a mitigation plan, which was approved by IDWR, and they are no longer subject to curtailment.

A and B Irrigation District, Idaho: Call on the River

In 2006, A and B Irrigation District (A and B), a senior groundwater user, claimed it was materially injured due to junior groundwater pumping. Landsat data processed with the METRIC model served as key evidence for the case. One way of determining if there was a shortage of water in A&B was to analyze three archived Landsat scenes. Water use was compared through the evapotranspiration measurements conducted in METRIC for groundwater and surface-water users in A and B and the surrounding groundwater users. The mean daily evapotranspiration chart did not show water shortage in the area in dispute.

Landsat imagery is increasingly used in the private sector. E. and J. Gallo (Gallo), located in California, is the largest winery in the world and the first known company in the U.S. beverage industry to use Landsat data in viticulture practices. A pioneer of efficient water-management practices through Landsat, Gallo uses the imagery on approximately 20,000 acres of Gallo-owned vineyards from Southern California to Mendocino County.

Landsat has been instrumental in helping Chile estimate water demand. The country often faces drought conditions, and although some level of water supply is guaranteed from dams and reservoirs, seasonal supply is uncertain. Agricultural production is a large enterprise in Chile, and water shortages create uncertainty in agricultural production as well as economic growth and sustainability. Landsat imagery allows the country to estimate seasonal demand and match it against seasonal supply to achieve optimal irrigation practices for maximum production. 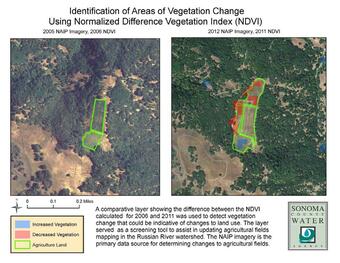 In 2013, the SCWA updated the crop field GIS mapping in the watershed last completed in 2009. To facilitate the heads-up digitizing of crop fields, the SCWA developed a “screening tool” layer to identify changes in vegetation from the previous imagery to the most recent. The SCWA’s screening tool helped by highlighting changes using NDVI to track land use changes from 2006 to 2012. The SCWA calculated NDVI using the ArcMap NDVI function for two Landsat scenes from August 2006 and 2011. Imagery for the month of August was chosen because of reduced cloud cover as well as being far into the growing season.

Riverside has also worked with the CWCB to develop a DSS for the South Platte River in Colorado. An important component of the DSS is to perform irrigated lands delineation utilizing the Landsat platform and to provide information for decision making regarding water resources and agricultural crop production in the South Platte.

The lands along the Russian River of California are home to over 61,000 acres of vineyards. The wineries, offering tours and tastings as well as producing wine, contribute greatly to the economic prosperity of the region. The valley’s grapes produce some of the highest quality Chardonnay, Cabernet Sauvignon, and Pinot Noir wines. A thriving economy in the region depends on flourishing agricultural production while grape production relies on timely water availability for irrigation and frost control.

In the State of Colorado, Riverside Technology, inc. conducted a project, in collaboration with the CWCB, to compare traditional consumptive-use estimates from Colorado StateCU decision support system (DSS) and Landsat thermal data processed in METRIC. The results showed that application of METRIC model on Landsat thermal imagery provides more consistent output than that of the StateCU model. The METRIC model in conjunction with Landsat data is also able to identify consumptive use variation along the river reach.

Return to Case Studies of Landsat Imagery Use