The Natural Resources Districts (Upper Elkhorn, Lower Elkhorn, Upper Loup, Lower Loup, Middle Niobrara, Lower Niobrara, Lewis and Clark, and Lower Platte North; referred to as NRDs) and the Nebraska Department of Natural Resources (NDNR) are concerned with the effect of groundwater withdrawal on the availability of surface water and the long-term effects of groundwater withdrawal on the groundwater resource in the Elkhorn River and Loup RIver Basins. The Elkhorn-Loup Model, is a USGS Nebraska Water Science Center project, done in cooperation with the NRDs and NDNR,  and is designed to assist the NRDs and NDNR by characterizing the groundwater system within the Elkhorn River and Loup RIver Basins and by providing a regional groundwater-flow model.

The Elkhorn-Loup Model, a multi-phase project, is a study of surface-water and groundwater resources in the Elkhorn River basin upstream from Norfolk, Nebraska, and the Loup River basin upstream from Columbus, Nebraska. The study area covers approximately 30,800 square miles, and extends north to the Niobrara River and south to the Platte River. The eastern boundary coincides with the approximate location of the westernmost extent of glacial till in eastern Nebraska.

Continuation of the study, phase two, was part of a larger, ongoing effort to enhance the current knowledge of hydrogeology,  improve the understanding of stream-aquifer interactions, and compile reliable data describing hydrogeologic properties such groundwater recharge, groundwater pumpage for irrigation, and groundwater discharge to evapotranspiration in the study area.

In addition to enhancing the data to the simulations, parameter-estimation techniques were used for phase-two simulation calibration, providing a more robust calibration. Other enhancements to the simulations included refining the grid discretization, using time-variable recharge from precipitation, time-variable base-flow estimates, improved estimates of groundwater withdrawals for irrigation, and refined delineation of active evapotranspiration grid cells. 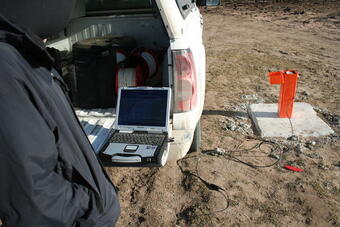 Finally, the results of the phase-three model will undergo calibration via parameter estimation similar to the calibration done for phase two, as well as the completion of additional analysis runs.

Simulation of groundwater flow, 1895–2010, and effects of additional groundwater withdrawals on future stream base flow in the Elkhorn and Loup River Basins, central Nebraska—Phase three

Simulation of groundwater flow and effects of groundwater irrigation on stream base flow in the Elkhorn and Loup River Basins, Nebraska, 1895-2055-Phase Two

Regional groundwater-flow simulations for a 30,000-square-mile area of the High Plains aquifer, referred to collectively as the Elkhorn-Loup Model, were developed to predict the effects of groundwater irrigation on stream base flow in the Elkhorn and Loup River Basins, Nebraska. Simulations described the stream-aquifer system from predevelopment through 2005 [including predevelopment (pre-1895), e
By
Water Resources, Nebraska Water Science Center
September 30, 2009

In 2005, the State of Nebraska adopted new legislation that in part requires local Natural Resources Districts to include the effect of groundwater use on surface-water systems in their groundwater management plan. In response the U.S. Geological Survey, in cooperation with the Upper Elkhorn, Lower Elkhorn, Upper Loup, Lower Loup, Middle Niobrara, Lower Niobrara, Lewis and Clark, and Lower Platte
By
Water Resources, Nebraska Water Science Center
May 1, 2009

Irrigated agriculture is vital to the livelihood of communities in the Elkhorn and Loup River Basins in Nebraska, and ground water is used to irrigate most of the cropland. Concerns about the sustainability of ground-water and surface-water resources have prompted State and regional agencies to evaluate the cumulative effects of ground-water irrigation in this area. To facilitate understanding of
By
Water Resources, Nebraska Water Science Center
April 21, 2008

Streamflow measurements were made during November of 2006 in the Elkhorn and Loup River basins and selected streams in the Niobrara and Platte River basins in north-central Nebraska. At these 531 sites, flows ranging from no flow to 2,600 ft3/s were measured or observed. The data are presented in a table along with the quality of measurement and the method that was used. Maps show the location of