The decline of freshwater animals has resulted in an increase in the number of imperiled species and extinctions. USGS scientists use genetics to determine if these species truly are gone forever.

The Science Issue and Relevance: Tracking the status of North America’s major freshwater faunas (fishes, snails, mussels, and crayfishes) provides important information that is used by government agencies, academic researchers, and NGO cooperators. Independent assessments conducted over years reveals a clear pattern of increasing numbers of imperiled species and recent extinctions. The primary causes for these declines are multiple forms of habitat loss and introductions of nonindigenous species. The importance of these stressors varies by group, for example, habitat loss has severely affected snails whereas introduction of non-native species is the major cause of decline in crayfishes. The ultimate conservation concern is that modern rates of species extinctions are orders of magnitude greater than background extinction rates evidenced in the fossil record.

Methodology for Addressing the Issue: The Endangered Species Act of 1973, as amended, provides for scientific studies that address recovery needs of listed species. For all taxa, including those listed under the Act, fundamental research includes threat identification, population viability analysis, population structure studies relative to distribution patterns (especially if fragmentation is evident), basic life history research, habitat use, including seasonal and developmental variation, reproductive behavior, habitats, and reproductive potential, spawning seasons, abundance estimates and changes in abundance over time. Systematic studies including descriptions of new species, effective population size, and similar studies are common examples of conservation related research conducted at the WARC. With respect to freshwater mussels that depend on freshwater fishes to complete reproduction (mussel family Unionidae), identification of fish hosts, and anatomical studies to disclose potential lures and super conglutinates relative to host fishes, SEM of glochidia, and emerging technologies such as use of eDNA (environmental DNA) are used to detect presence of extremely rare species. In addition to biological studies, these animals have served as models for development of biometric techniques for population estimation based on point counts and detection probability estimation.

Future Needs: This minnow is the Slender Chub (Erimystax cahni), an example of a listed species about which we have very little recent information. Indeed, we are not even sure if the species is still extant, yet, but because it is listed species, the U.S. Fish and Wildlife Service is required to implement recovery of the species. In the case of the Slender Chub, USGS scientists have designed research proposals, using modern molecular techniques, to determine if the slender chub is likely extinct or not. Other examples of exigent research needs are establishing baseline studies in areas where there is likely to be conservation challenges in the near future. For example, groundwater withdrawals are increasing due to population growth. Headwater streams with base flows dependent on groundwater levels harbor imperiled mussels and fishes in Georgia and Florida, yet there are no data relating population sizes to flows or groundwater levels needed to maintain minimal headwater stream discharges. While habitat loss and interactions with non-native species are known to be the leading causes of extinction, research is needed to understand the underlying mechanisms that cause decline, extirpation, or even extinction of mussels and fishes. 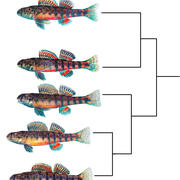 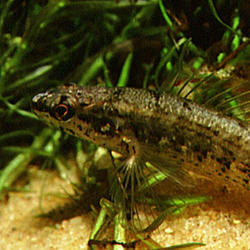 This website provides access to the list of imperiled freshwater and diadromous fishes of North America as determined by the 2008 American Fisheries Society (AFS) Endangered Species Committee (ESC) on Fishes.
Learn More
link

The southeastern United States is home to a variety of freshwater snails, mussels, crayfish, and fishes. USGS scientists are conducting systematic studies to better document the region's biodiversity.
Learn More