Sampling for Gulf Coast waterdogs is providing essential information to better understand the factors that impact the species' occupancy across Louisiana.

The Science Issue and Relevance: The Gulf Coast waterdog (Necturus beyeri) is a largely nocturnal salamander with external gills that is currently recognized to have a limited range in Texas, Louisiana, and Mississippi. In Louisiana, it is a species of management concern, where it is ranked as S3 in the state (rare and local with 21-100 known populations). Its global rank is G4 (more than 100 occurrences; usually not susceptible to immediate threats), though it may be quite rare in parts of its range. The medium and large spring-fed streams with sandy bottoms in which it lives are particularly susceptible to degradation due to water pollution and siltation, which have been implicated in declines in related species elsewhere. It is possible that these same stressors impact occupancy and habitat use by N. beyeri, but the importance of these factors is unknown. Prey and predator abundances, which may also be impacted by water quality, also likely impact occupancy and abundance of N. beyeri.

Methodology for Addressing the Issue: In Spring 2015, we divided up a single bayou in southeastern Louisiana into 50-meter sections separated by at least 100 meters from either end, for a total of 25 sites over 13 km of bayou. We sampled each site containing 10 unbaited minnow traps three times. For each N. beyeri capture, we determined sex if they were adults and measured snout-vent length, total length, and mass. In addition, we obtained tissue samples from a subset of captures for genetic analysis, and we swabbed all captures to screen for Batrachochytrium dendrobatidis (Bd) and B. salamandrivorans (Bsal), the fungal pathogens responsible for amphibian chytrid diseases that have decimated amphibian populations worldwide. In 2016 and 2017, we randomly selected sites at state or federal highway bridge crossings in the range of Necturus in Louisiana, with an emphasis in southwest Louisiana. Our capture method and processing protocol during these surveys was similar to 2015.

This research gives us a better understanding of the factors that impact Necturus occupancy across Louisiana. Variables that may affect occupancy or detection probability, such as water temperature, water depth, rainfall, dissolved oxygen, stream flow, turbidity, siltation, drainage area, and presence of leaf packs and other submerged coarse woody debris, may be used as covariates in our analyses. In 2018 and 2019, we sampled Necturus as part of a nationwide capture-mark-recapture effort to examine the impacts of environmental stressors on prevalence and pathogen load of Bd. Estimating survival from this effort is difficult due to the low number of recaptures, but we were able to get baseline mercury levels in Necturus which will contribute to a study concerning mercury in U.S. amphibians.

Future Steps: We have suspended field work for this line of study, but we are working to put together the results in anticipation of two or more publications. 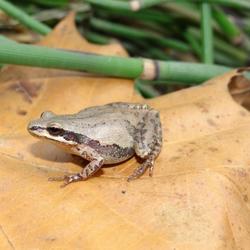 In response to growing public concerns about this loss of biodiversity, the U.S. Congress funded the Amphibian Research and Monitoring Initiative (ARMI), a national program coordinated by the U.S. Geological Survey.
By
Wetland and Aquatic Research Center
link
June 11, 2020

In response to growing public concerns about this loss of biodiversity, the U.S. Congress funded the Amphibian Research and Monitoring Initiative (ARMI), a national program coordinated by the U.S. Geological Survey.
Learn More

Amphibians are one of the most threatened groups of vertebrates (Stuart et al. 2004; Wake and Vredenburg 2008), and the application of molecular techniques to amphibian ecology and genetics has dramatically improved our ability to conserve species and populations (see Shaffer et al. [2015] for review). Microsatellites, tandem repeats of two to six nucleotides in the nuclear genome, are highly vari
By
Ecosystems, Wetland and Aquatic Research Center
June 23, 2017

Prevalence of Batrachochytrium dendrobatidis and B. salamandrivorans in the Gulf Coast Waterdog, Necturus beyeri, from Southeast Louisiana, USA