When did Lassen Peak last erupt?

The most recent eruptive activity at Lassen Peak (California) took place in 1914-1917. This eruptive episode began on May 30, 1914, when a small phreatic eruption occurred at a new vent near the summit of the peak. More than 150 explosions of various sizes occurred during the following year.

By mid-May 1915, the eruption changed in character; lava appeared in the summit crater and subsequently flowed about 100 meters over the west and (probably) east crater walls. Disruption of the sticky lava on the upper east side of Lassen Peak on May 19 resulted in an avalanche of hot rock onto a snowfield. This generated a lahar that travelled more than 18 kilometers down Lost Creek. On May 22, an explosive eruption produced a pyroclastic flow that devastated an area as far as 6 kilometers northeast of the summit.

The eruption also generated lahars that flowed more than 20 kilometers down Lost Creek and floods that went down Hat Creek. A vertical eruption column from the pyroclastic eruption rose to an altitude of more than 9 kilometers above the vent and deposited a lobe of tephra that can be traced as far as 30 kilometers to the east-northeast. The fall of fine ash was reported as far away as Elko, Nevada - more than 500 kilometers east of Lassen Peak. Intermittent eruptions of variable intensity continued until about the middle of 1917. 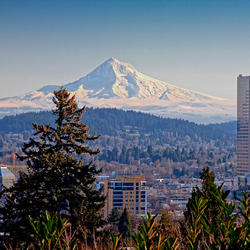 Which volcanoes in the conterminous United States have erupted since the Nation was founded?

Which volcanoes in the conterminous United States have erupted since the Nation was founded?