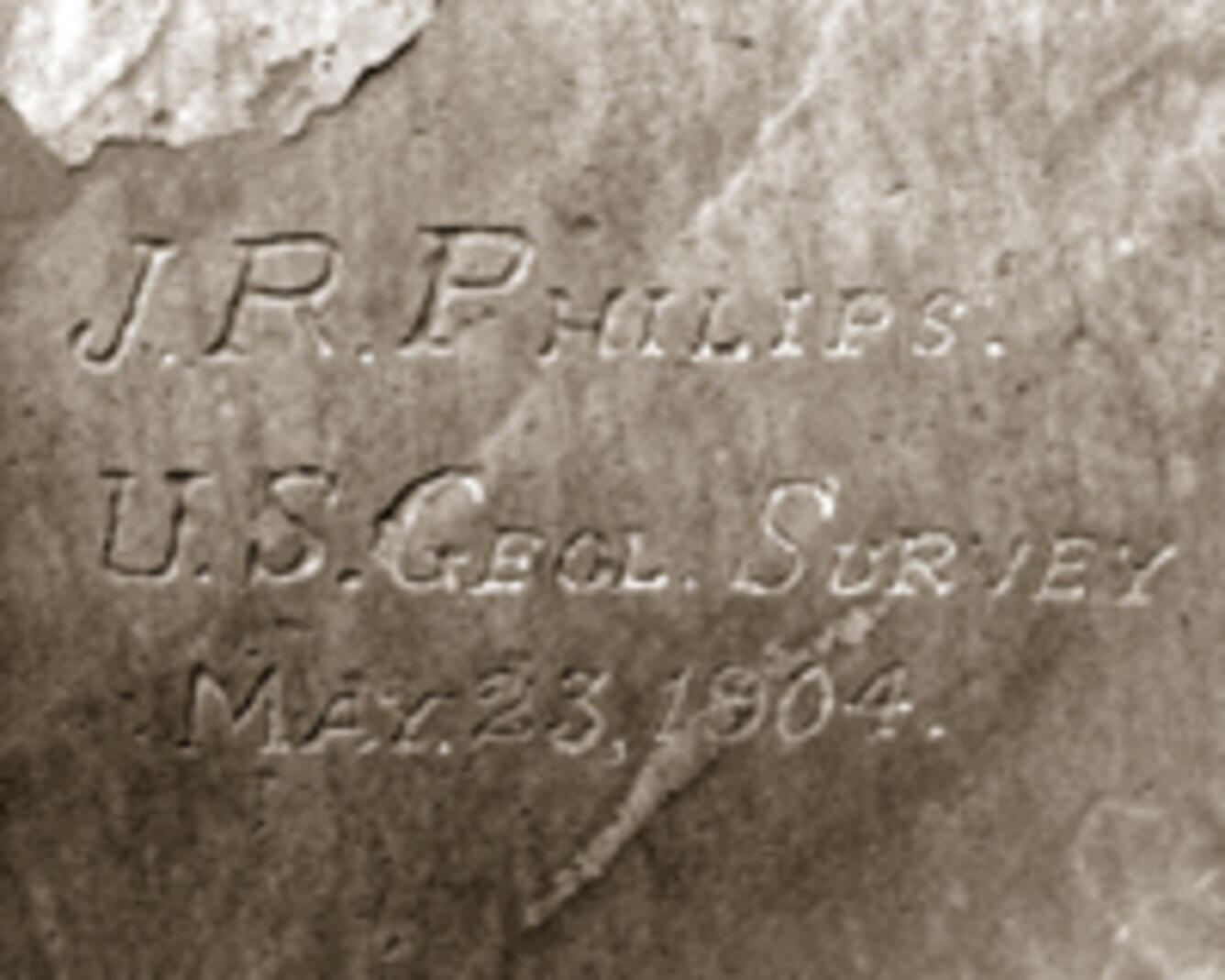 I took this rare photographic gem during a Grand Canyon backpacking trip in May 1981. I worked in the USGS New Mexico District (Water Resources Division) at the time and had been employed as a USGS ground-water hydrologist for only a year.

The photo is of an elegant inscription that is skillfully chiseled or engraved into a large boulder of the Permian-aged Coconino Sandstone, which is the third major geologic formation below the Grand Canyon rim.The boulder is hidden behind high, densely grown bushes near a small spring along a trail several miles west of the South Rim Visitor’s Center. The spring issues from the Coconino Sandstone at the contact with the underlying Hermit Shale.

I feel that it is logical to assume that Mr. Philips was a member of the USGS Topographic Surveys of the Grand Canyon, which were led by the venerable Francois Matthes from 1902–1905. Perhaps the Matthes survey party was camped in the area of the spring at the time. Philips probably accomplished his handiwork over a period of several days. The Philips inscription is about one-foot square, and is of high quality, resembling the work a craftsperson would chisel into a granite monument. Note that the letters even have serifs.

Consider the year of the J.R. Philips inscription—1904. The USGS was celebrating its 25th year of science for America. On May 23rd, 2004, this inscription was 100 years old, and in 2004, the USGS is celebrating its 125thof science for America! The Philips inscription is notable and serves as a reminder—as lasting evidence—that the USGS has been conducting science in the public service for a long, long time. Indeed, the evidence is carved in stone!

As an historical after note, Francois Matthes went on to become both a highly respected USGS topographer and geologist, and over the next several decades, conducted topographic and geologic investigations of Mount Rainier, Yosemite, and Sequoia National Parks and authored several USGS reports on the glacial geology of these parks. In 1927, he wrote a colorful account of the USGS Grand Canyon topographic surveys in Grand Canyon Nature Notes; this interesting article, illustrated with photographs from those surveys, is on the World Wide Web at http://www.oocities.org/shioshya/matthes/matthes.html. Francois Matthes retired from the USGS in 1947, after more than 50 years of outstanding service in both the USGS Topographic and Geologic Branches; he died the following year.

(Editorial postscript: the article on the link above about Francois Matthes is an excellent example of courage and leadership abilities exhibited by USGS scientists and their teams during the early history of the Survey.)

« Back to Leadership Stories