The Landsat data archive is frequently touted as the longest continuous space-based record of Earth’s land in existence, and plays an unparalleled role in monitoring and understanding our ever-changing land surface.

This is entirely true, but in practical terms, taking advantage of the full Landsat time series is a major challenge. Landsat sensors have been collecting data since 1972, and as you can imagine, technology enhancements over time have incrementally resulted in more precise, richer data. The consequence is varying spatial, spectral, and radiometric resolutions between data collected from different sensors. These differences require some type of data normalization to be applied in order for simple inter-sensor comparisons to be made.

In an effort to leverage the entire 45+ year time series archive, an automated workflow program (LandsatLinkr - LLR) was developed by the Laboratory for Applications of Remote Sensing in Ecology (LARSE) at Oregon State University. The program is a proof-of-concept model for “easily” harmonizing the entire Landsat archive into a congruent time series, producing annual near-cloud-free composite data that can easily be compared across all years from 1972-present. It assembles existing image processing and harmonization methods into an organized system that runs in the R programming environment using a single command followed by an interactive interface to select procedures and provide inputs. Essentially it takes data from Landsat sensors MSS and OLI and makes them match the properties of TM/ETM+ surface reflectance data products. To find out more about the details of the process and the outputs, visit the LandsatLinkr GitHub page.

The Fort Collins node of NASA DEVELOP, an interdisciplinary capacity building program of NASA’s Applied Sciences, has used the LandsatLinkr utility in multiple ten week projects to tackle tasks like fire history mapping and disturbance reconstruction over multiple decades. The node used the tool when it was first released to map a fire history in Ethiopia’s Bale Mountains National Park. Before a resource like LandsatLinkr was available, attempting to use data from the entire Landsat archive in a time series would have been next to impossible in the short time frame of a DEVELOP project.

LandsatLinkr significantly expedited image processing and supplied a spectrally consistent product that allowed the teams to evaluate fire occurrence and return intervals for the park over a multi decade time period. In addition to being a powerful analytical tool, node staff have also found the tool to be valuable resource for teaching the fundamentals of remote sensing and Landsat. Since the tool uses the entire Landsat archive, the workflow of LandsatLinkr spurs the participants to learn the specifications of each sensor and how they change through time, where and how to obtain Landsat imagery, and to consider the more technical details of using the Landsat archive to detect change over time.

The image below was derived from a scene captured by the Landsat 5 Thematic Mapper (TM) sensor on March 9, 2000, and processed using the LandsatLinkr R package. In this image, the Harenna Forest on the southern side of the Bale escarpment is shown in turquoise, the Afro-alpine soil and vegetation on the escarpment is shown in red tones, and the burned areas can be seen as dark blue pathces in the blue shrubland zone between the forest and alpine areas. Smoke from an acitve fire is visible in pink near the center of the image. This image, in conjunction with data from previous and subsequent years, can be used to examine historical fire patterns and to help develop environmental management strategies for anthropogenic burning in the Bale Mountains. 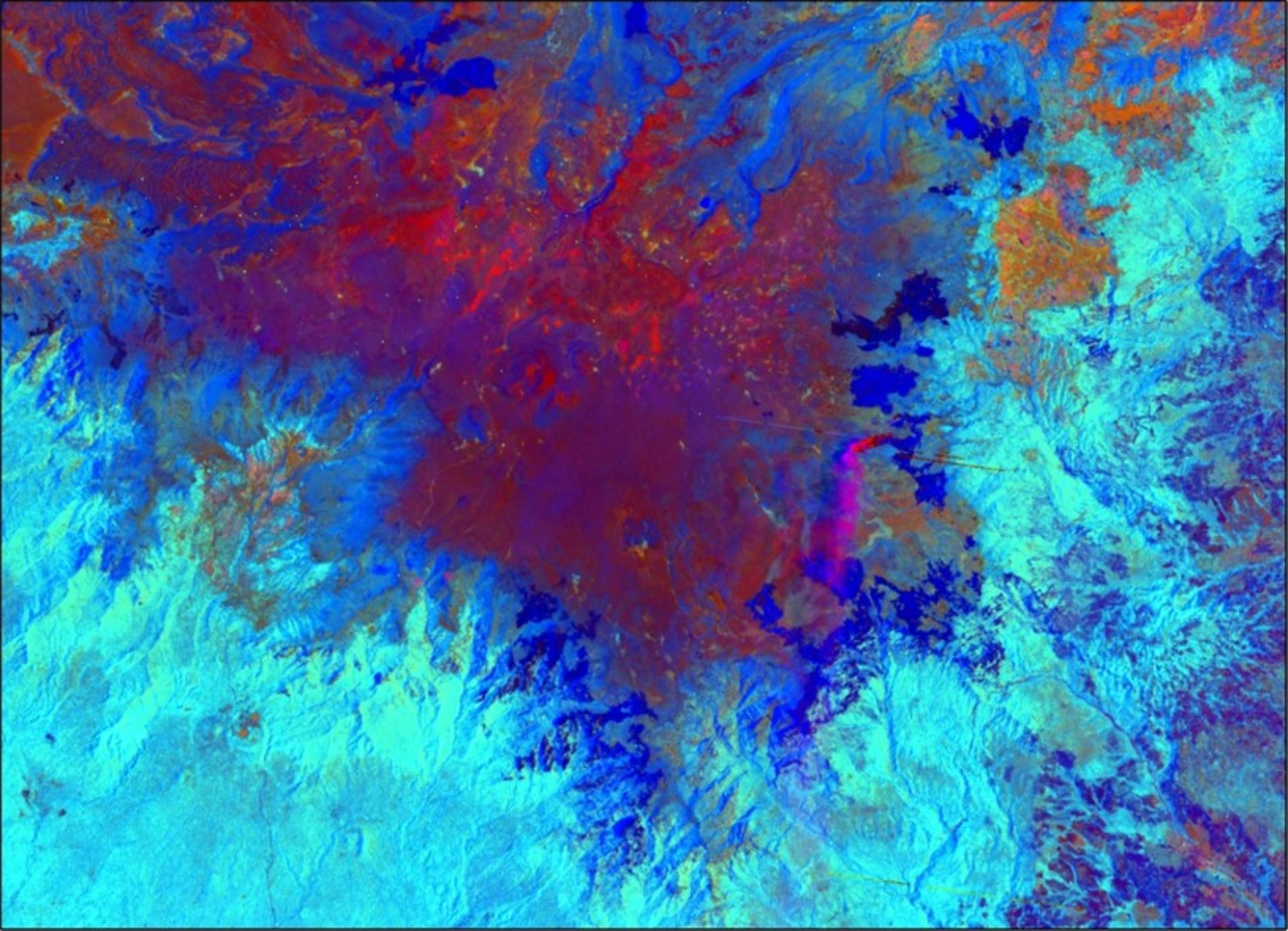 The top row of the figure below shows the MSS TC planes for a Landsat image while the bottom row are the TC planes for the coincident TM image. As you can see, the distribution of pixel values between the images for each TC plane are very similar. The greatest deviation is for TC wetness, which is heavily weighted by short-wave infrared, which MSS data does not contain (is it modeled in the LLR process). 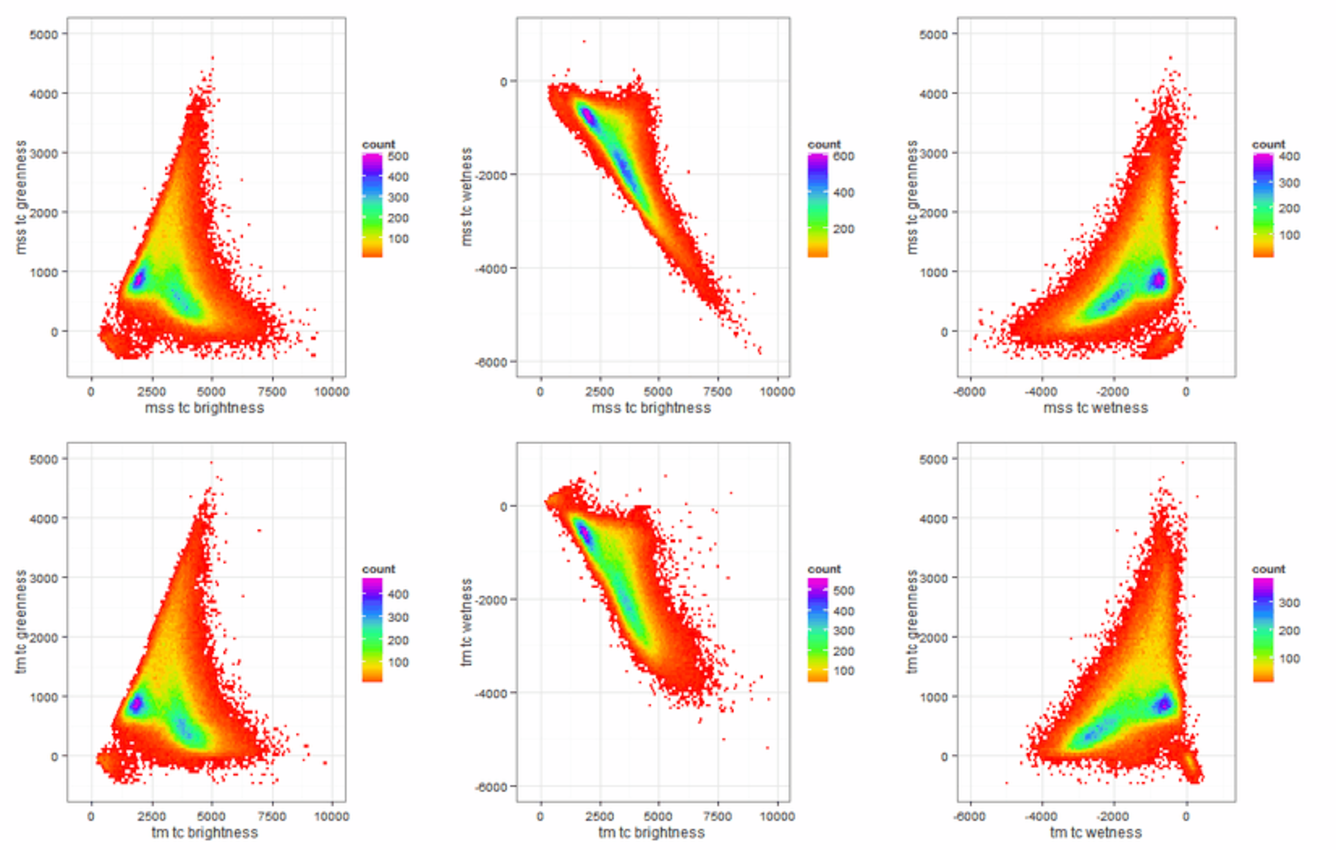 The next example illustrates how MSS and TM Tasseled Cap brightness, greenness, and wetness, shown respectively as red, green, and blue, exhibit close similarity between the coincident images. 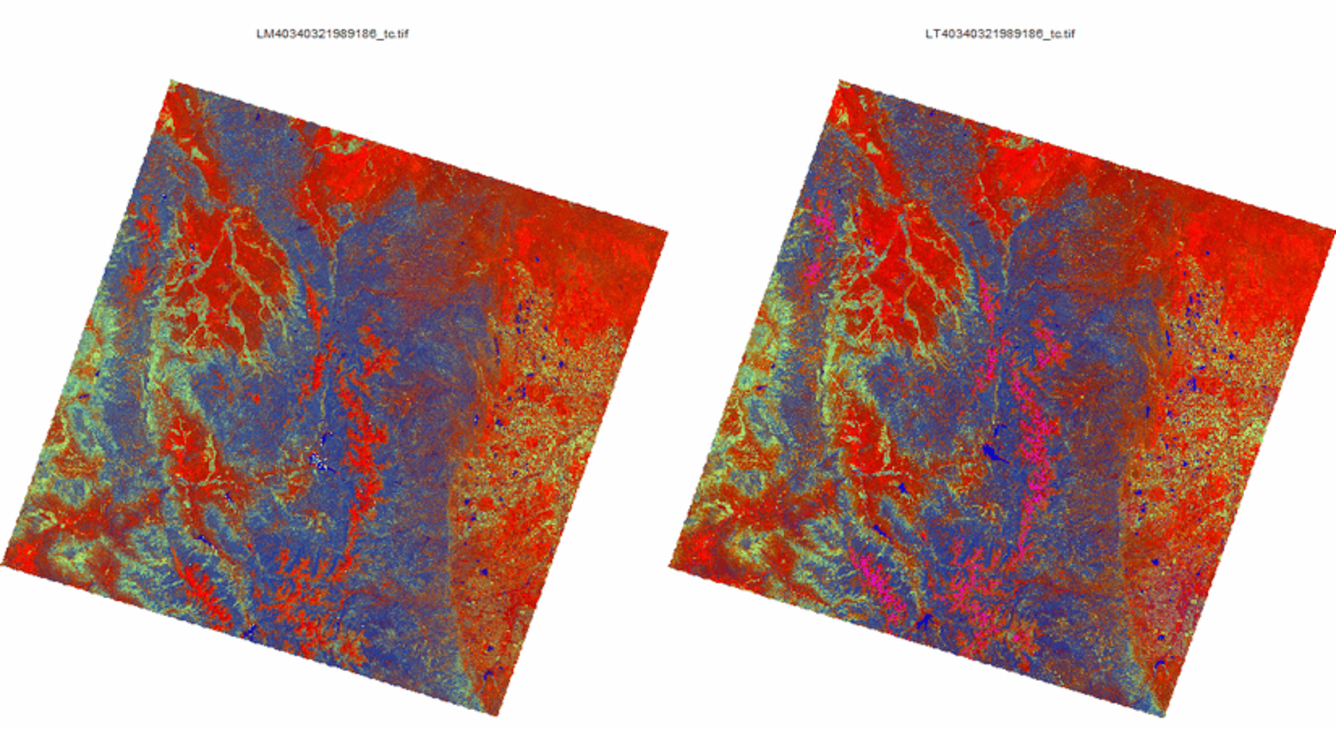 A particular pixel's spectral-temporal chronology, illustrated in the figure below shows a forest pixel that is greening up, followed by a major disturbance around 2005-2006 (likely a harvest), and then subsequent vegetation regrowth (note the smooth, blended transition between sensors and their overlap). 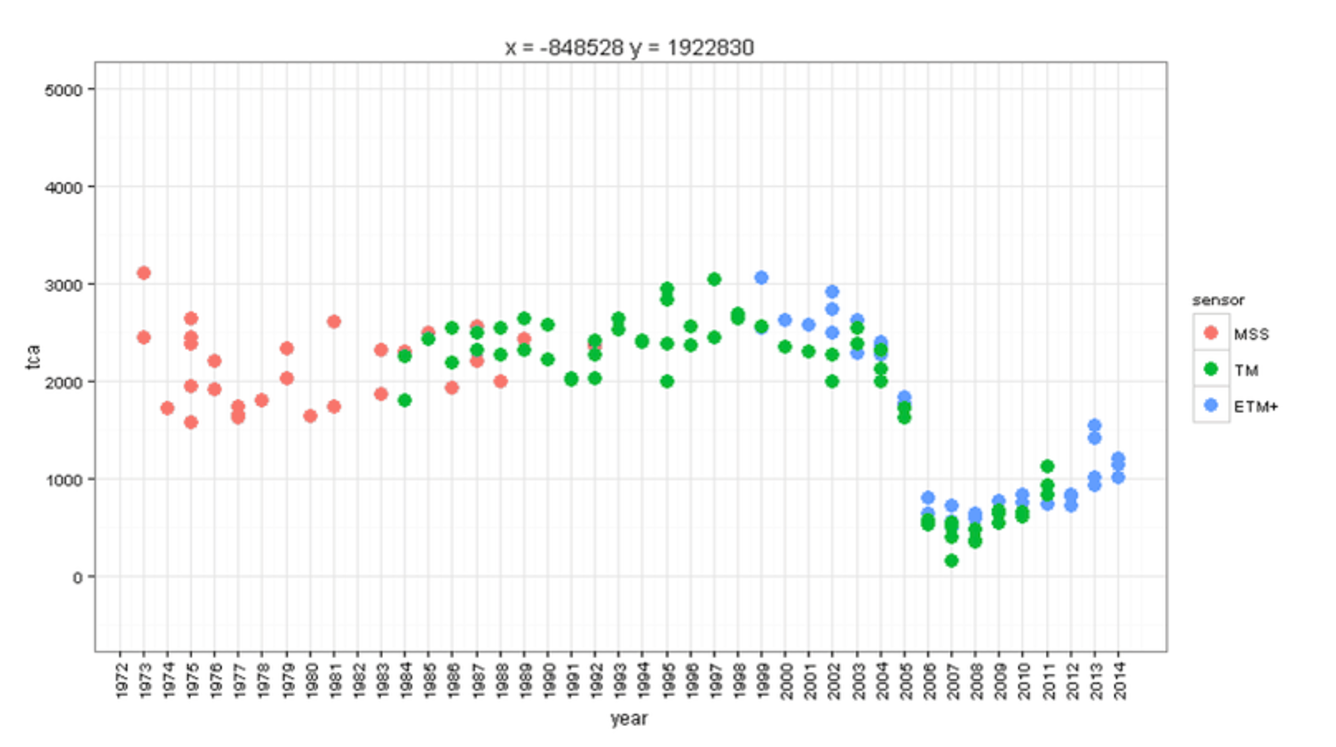