The USGS provides practical, unbiased information about the Nation's rivers and streams that is crucial in mitigating hazards associated with floods. This site provides information about the USGS activities, data, and services provided during regional high-flow events, such as hurricanes or multi-state flooding events. The USGS response to these events is typically managed by the National Flood Hazard Coordinator.

Click on an event name to access news, data, and resources for regional flood events that involved a national coordinated USGS response.

Hurricane Michael - Hurricane Michael made landfall near Panama City, Florida, on October 10, 2018, as a Category 5.  It caused catastrophic flooding and wind damage across Central America and the Southeastern U.S., particularly the Florida panhandle.

Hurricane Nate - Capping off an intense 2017 hurricane season, Nate made landfall on the Louisiana and Mississippi coasts on October 7.

Hurricane Maria - Maria made landfall in Puerto Rico as a strong category 4 hurricane, with winds of 155 mph that knocked out power for the entire island.

Hurricane Jose - Even though Hurricane Jose never made a direct impact on the United States in September 2017, it generated large waves along its entire path and coastal effects have been felt from Florida to New England.

2015/2016 Winter Floods - Widespread flooding from severe December 2015 rainfall affected large sections of the central and southern United States. Stress on the Nation's major rivers continued into 2016, as portions of the Ohio River, Missouri River, and Mississippi River threatened to match or exceed 2011 levels.

August Louisiana Floods - Rainfall across Louisiana including amounts above 30 inches in some locations resulted in record-setting flooding.

September Northern Plains Floods - More than 12 inches of rain fell in northeast Iowa, southeast Minnesota, and southwest Wisconsin during a 24-hour period on September 22 and 23, 2016. Wisconsin streamgages saw floods in the 10- to 100-year range.

Hurricane Matthew - A severe hurricane crossed Cuba and the Bahamas on its way toward the Florida coast.

Summer Central Floods -  Repeated high-intensity storms wiped out drought conditions across much of Texas while Oklahoma experienced the single largest month of rainfall ever recorded. Soon after, farm-belt States and the Ohio River valley endured an unusually wet summer.

Autumn Appalachian Floods and Hurricane Joaquin - While Hurricane Joaquin threatened from the South Atlantic Ocean, weeks of persistent and sometimes heavy rain soaked the Appalachian States. USGS crews prepared for the double-threat of inland flooding and potential coastal flooding and damage from the Hurricane. Joaquin eventually passed by with moderate effects on the coast while USGS crews remained occupied with the inland floods.

2015/2016 Winter Floods - Widespread flooding from severe December 2015 rainfall affected large sections of the central and southern United States. Stress on the Nation's major rivers continued into 2016, as portions of the Ohio River, Missouri River, and Mississippi River threatened to match or exceed 2011 levels.

April floods in Alabama and Florida - Heavy rains over Southern Alabama and the Florida panhandle brought peak-of-record flooding on Bayou Marcus Creek and over $21 million in damage to Escambia County infrastructure.

April-May Midwest Floods - Heavy rainfall (locally as much at 8 inches in some locations) fell across parts of Missouri, Iowa, Illinois, Wisconsin, Michigan, and Indiana in mid-April, resulting in major flooding on several rivers. Late snow-melt in the northern midwest added to the flooding in late April and early May.

Hurricane Isaac - USGS scientists, engineers, and technicians worked along the Gulf coast in response to Hurricane Isaac, deploying and maintaining 188 storm tide sensors and real-time streamgages in anticipation of Isaac's arrival. The USGS, in concert with our partners, is providing scientific assessments of the challenges wrought by Isaac.

Hurricane Sandy - Following on the heels of Hurricane Isaac, Hurricane Sandy gave USGS scientists, engineers, and technicians another opportunity to deploy storm tide sensors and real-time streamgages, this time, in over 224 locations.

April 2011 Arkansas Flood - The summer of 2011 brought historic flooding to Arkansas. In addition to the massive floodwaters that coursed down the Mississippi River, unusually heavy rainfall caused backwater flooding and levee failure along the Black and White Rivers as well.

April 2011 North Dakota Flood - On April 6, 2011, warmer-than-expected temperatures, combined with some light rain, initiated the melt process. Soon, record-breaking floodwaters came coursing down the Missouri, Red, and Souris Rivers, leading to massive flooding and even forcing some North Dakotans to flee their homes.

May 2011 Louisiana flood - USGS crews from the Louisiana Water Science Center deployed stage sensors and rapid deployment real-time streamgages in the Morganza floodway in anticipation of the operation of the floodway, which was opened May 14, 2011 at 3:00pm. The USGS also made streamflow, water quality, and sediment concentration measurements in association with the Bonnet Carre' spillway upstream of New Orleans.

Summer Missouri River Basin flood - USGS crews from Montana to Missouri watched closely as a higher-than-average snowmelt runoff combined with heavy spring rains advanced down the Missouri River system. Large reservoirs managed by the US Army Corps of Engineers (USACE) are carefully managed with the help of data from the USGS streamgaging network to control flood levels.

Hurricane Irene - The USGS deployed stage sensors and rapid deployment real-time streamgages along the East Coast in anticipation of Hurricane Irene. USGS measurements and geospatial products are valuable tools for providing scientific assessments to decision makers both during the event and for future planning after the event.

Flood Publications for Events Prior to 2011

The USGS National Flood Hazard Coordinator began documenting large-scale flood events in 2011. For events prior to 2011, the curated list below includes reports about many events, large and small, from the early 20th century through the present day. Users may also wish to consult the USGS Publications Warehouse for an exhaustive search of particular events that may be missing from this list.

Below are other science projects associated with flooding. 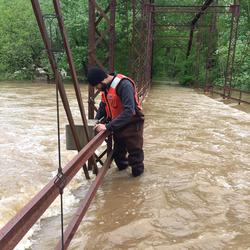 Over 160 of our scientists, technicians, and specialists responded to Hurricane Sandy by deploying field equipment and capturing information both before and after the storm. Our Sandy Science Plan identifies major research themes that will guide research to continue the support of the recovery activities.
Learn More

Below are data or web applications associated with flooding.

Below are data or web applications associated with flooding.

Below are news stories associated with flooding. 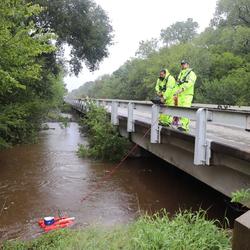 No one has a crystal ball to foresee what will happen during the 2018 hurricane season that begins June 1, but NOAA forecasters say there’s a 75 percent chance this hurricane season will be at least as busy as a normal year, or busier.

Below are partners associated with USGS flood activities.