Mercury in the Environment

Mercury in the Nation's Streams

Mercury is a potent neurotoxin that can affect the human nervous system. Eating fish contaminated with mercury can cause serious harm to people and wildlife. 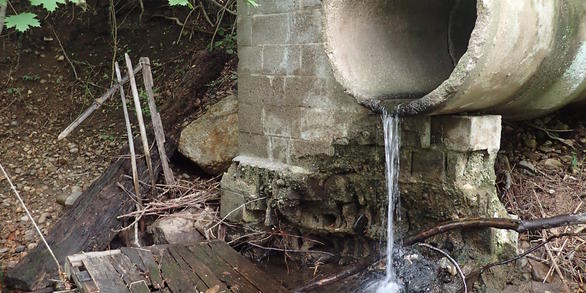 Isotopes of mercury in fish can indicate the source of that mercury, reports a new USGS study. The groundbreaking study is among the first to use mercury isotopes in fish tissue to track mercury sources.

Mercury is a potent neurotoxin that can accumulate in fish to levels of concern for human health and the health of fish-eating wildlife. Mercury contamination of fish is the primary reason for issuing fish consumption advisories, which exist in every State in the Nation. Much of the mercury in the environment originates from combustion of coal and can travel long distances in the atmosphere before being deposited on the land surface. As a result, mercury can bioaccumulate in fish in areas with no obvious source of mercury pollution.1

Mercury is the leading cause of impairment in the Nation's estuaries and lakes and was cited in nearly 80 percent of all reported fish-consumption advisories.2 The geographic extent of mercury advisories covers more than 10 million acres of lakes and more than 400,000 stream miles.3

The fact sheet Mercury Contamination of Aquatic Ecosystems answers many of the basic questions about mercury. For a deeper dive into the topic, download the USGS Circular 1395, highlighted below.

Mercury contamination is global and affects many waters that have no obvious mercury source. This is because mercury emissions generally disperse widely in the atmosphere before being deposited to the earth's surface. Mercury is emitted by natural sources, such as volcanoes, geothermal springs, geologic deposits, and the ocean. Human-related sources primarily include coal combustion, waste incineration, industrial uses, and mining. During the last 150 years, human activities have more than doubled natural amounts of mercury in the atmosphere.4

In matural waters, inorganic mercury is generally not a health concern. The real issue is methylmercury, an organic form that is highly toxic to the nervous system. Methylmercury is produced from inorganic mercury by methylation, a microbial process that is controlled by certain bacteria and enhanced by chemical and environmental variables, such as the presence of organic matter and the absence of oxygen. More than 95 percent of all mercury in fish is methylmercury, and this form of mercury biomagnifies to high concentrations at the top of food chains.5

Use the links below to explore multimedia items associated with USGS research on mercury and water quality.

Mercury has been well known as an environmental pollutant for several decades. As early as the 1950's it was established that emissions of mercury to the environment could have serious effects on human health. These early studies demonstrated that fish and other wildlife from various ecosystems commonly attain mercury levels of toxicological concern when directly affected by mercury-containing emi
By
Ecosystems, Water Resources, Environmental Health Program, Toxic Substances Hydrology, Upper Midwest Environmental Sciences Center, Upper Midwest Water Science Center
Filter Total Items: 23
July 1, 2014

The role of the hyporheic zone in mercury (Hg) cycling has received limited attention despite the biogeochemically active nature of this zone and, thus, its potential to influence Hg behavior in streams. An assessment of Hg geochemistry in the hyporheic zone of a coarse-grained island in the Coast Fork Willamette River in Oregon, USA, illustrates the spatially dynamic nature of this region of the
By
Water Resources, Oregon Water Science Center
March 14, 2014

Mercury in fishes from 21 national parks in the Western United States: inter- and intra-park variation in concentrations and ecological risk

Mercury (Hg) is a global contaminant and human activities have increased atmospheric Hg concentrations 3- to 5-fold during the past 150 years. This increased release into the atmosphere has resulted in elevated loadings to aquatic habitats where biogeochemical processes promote the microbial conversion of inorganic Hg to methylmercury, the bioavailable form of Hg. The physicochemical properties of
By
Ecosystems, Forest and Rangeland Ecosystem Science Center
May 13, 2013

Mercury (Hg) bioaccumulation factors (BAFs) for game fishes are widely employed for monitoring, assessment, and regulatory purposes. Mercury BAFs are calculated as the fish Hg concentration (Hgfish) divided by the water Hg concentration (Hgwater) and, consequently, are sensitive to sampling and analysis artifacts for fish and water. We evaluated the influence of water sample timing, filtration, an
By
Water Resources, New York Water Science Center
September 17, 2012

To assess inter-comparability of fluvial mercury (Hg) observations at substantially different scales, Hg concentrations, yields, and bivariate-relations were evaluated at nested-basin locations in the Edisto River, South Carolina and Hudson River, New York. Differences between scales were observed for filtered methylmercury (FMeHg) in the Edisto (attributed to wetland coverage differences) but not
December 31, 2010

Hydrological mobilization of mercury and dissolved organic carbon in a snow-dominated, forested watershed: Conceptualization and modeling

The mobilization of mercury and dissolved organic carbon (DOC) during snowmelt often accounts for a major fraction of the annual loads. We studied the role of hydrological connectivity of riparian wetlands and upland/wetland transition zones to surface waters on the mobilization of Hg and DOC in Fishing Brook, a headwater of the Adirondack Mountains, New York. Stream water total mercury (THg) conc
By
Water Resources, New York Water Science Center
December 31, 2010

Mercury trends in fish from rivers and lakes in the United States, 1969-2005

A national dataset on concentrations of mercury in fish, compiled mainly from state and federal monitoring programs, was used to evaluate trends in mercury (Hg) in fish from US rivers and lakes. Trends were analyzed on data aggregated by site and by state, using samples of the same fish species and tissue type, and using fish of similar lengths. Site-based trends were evaluated from 1969 to 2005,
By
Ecosystems, Contaminant Biology, Environmental Health Program, Columbia Environmental Research Center
August 19, 2009

Mercury in fish, bed sediment, and water from streams across the United States, 1998-2005

Mercury can adversely affect humans and wildlife through consumption of contaminated fish, particularly by sensitive individuals, such as children and women of childbearing age. Mercury is currently the leading cause of impairment in the Nation’s estuaries and lakes and was cited in nearly 80 percent of fish-consumption advisories (2,242 of 2,838) reported by states in 2000. The geographic extent
By
Water Resources, Ecosystems, Toxic Substances Hydrology, Environmental Health Program, Upper Midwest Environmental Sciences Center, Upper Midwest Water Science Center

Use the links below to find news stories on USGS research on mercury and water quality. 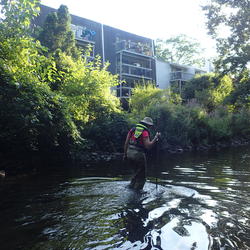 Isotopes of mercury in fish can indicate the source of that mercury, reports a new study from the USGS Regional Stream Quality Assessment.