Do mountain clouds exist because of upwind forests?

This article is part of the Spring 2021 issue of the Earth Science Matters Newsletter.

On the island of Puerto Rico, when invisible water vapor is lifted over the mountains by the steady northeast wind, it condenses into liquid water, forming clouds.  When temperatures cool late in the day, the clouds descend, blanketing the mountain slopes from late afternoon through overnight nearly every day of the year. This process is not unique to Puerto Rico and can be observed in mountain ranges worldwide - the Southern Appalachians and California coastal redwood forests are other examples. The clouds are picturesque from a distance, but are wet, drizzly fog if you are hiking or driving through them.

This cloud water is an important component of mountain ecohydrology. Earlier work at sites around the world indicated that cloud immersion both deposits water and suppresses evapotranspiration losses in mountain forests, leading to a net increase in sustainable water supplies. In Puerto Rico, for example, previous work on isotopic tracers in water indicated that locally-generated precipitation sustained streamflow despite a months-long drought. Even more interesting, several studies using climate models indicated that evapotranspiration water vapor from regional forests is instrumental in generating downwind precipitation, with the Amazon being a well-documented case.

The study objectives in Puerto Rico were to determine whether mountain clouds originated from upwind forest-derived water vapor in this coast-to-mountaintop system, and whether cloud base altitude (and thus the cloud-immersed proportion of mountain slopes) changed with forest disturbance.

Cloud immersion is difficult to quantify

Cloud water as a hydrologic input is quite difficult to measure - the droplets are too small to fall in standard rain gages, satellite measurements are (for now) too low-resolution, and airport ceilometers used to detect clouds are located at low elevation, away from forests. In the forests of the cloud-immersed mountain zone, the continual moisture corrodes electronics, while solar panels don’t get enough hours of sun to recharge batteries. So, for this research, USGS scientists devised new approaches to investigate how the daily clouds contributed to the forest-atmosphere components of the water budget. Time-lapse cameras detected cloud immersion, and gradients of temperature and relative humidity were measured every 30 minutes at 5 sites on the windward slope of the Luquillo Mountains from 600-1000 meters elevation. This 4.5-year time series included two extreme events that provided natural experiments to study system response to forest disturbance.

The researchers found the frequency of lower-elevation clouds to be directly related to the amount of rainfall over the land. This indicated that rain evaporated from soils and forest canopy and transpired out through plant leaves forms the clouds along the mountain slope. Although oceanic moisture provides a background level of humidity, land-based moisture recycling drives cloud-layer thickness along the mountain slopes.

During the study, there was a severe drought across the island of Puerto Rico from June 2015 to February 2016. In September 2017, major hurricane Maria impacted the study area, removing >40% of aboveground biomass and virtually all of the tree canopy, in effect a temporary deforestation. These events significantly altered the daily temperature range, the humidity, and the ability of plants to deliver water vapor to the atmosphere. The cloud system was also affected - clouds were less frequent at lower altitude on the mountain slope during drought and after the loss of foliage, and then mountain-top clouds became more frequent as understory plants proliferated and trees slowly recovered from the hurricane damage.

These results can inform models to predict what may happen to mountain forest water resources in response to climate change or deforestation. Increase in global and regional temperatures may eliminate this important water recycling mechanism on low mountains, and deforestation changes the cloud system in complex ways, depending on whether and how quickly forest regrowth occurs. To follow up this work, we are now assessing how the drought and hurricane damage affected the streams flowing from the mountains.

Supplementary data for studies conducted in the Luquillo Experimental Forest (LEF), eastern Puerto Rico include measurements of temperature, relative humidity and cloud immersion at 30-minute resolution. Temperature and relative humidity were measured at five sites; two primary sites have records from March 2014 to June 2019; other sites have shorter records within that period. From these data,
By
Climate Research and Development Program, Land Change Science Program 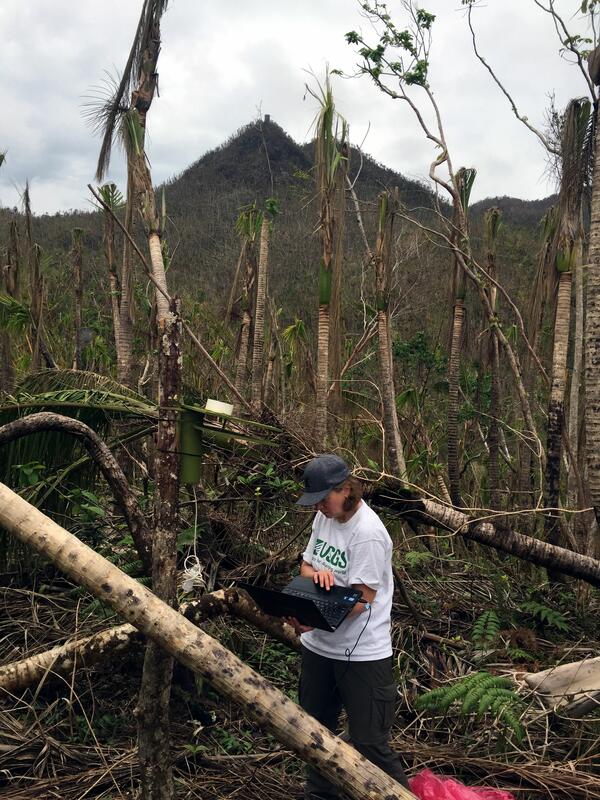 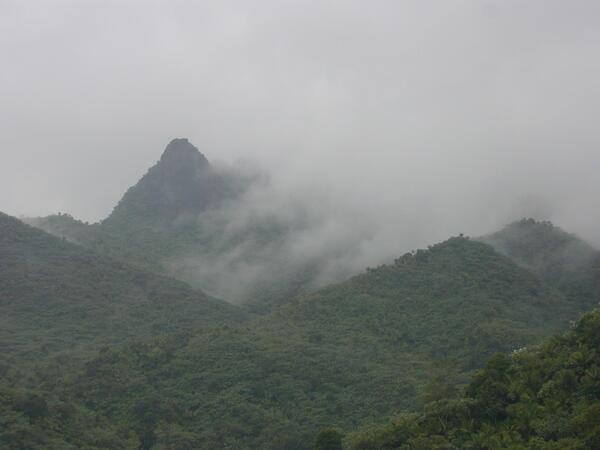 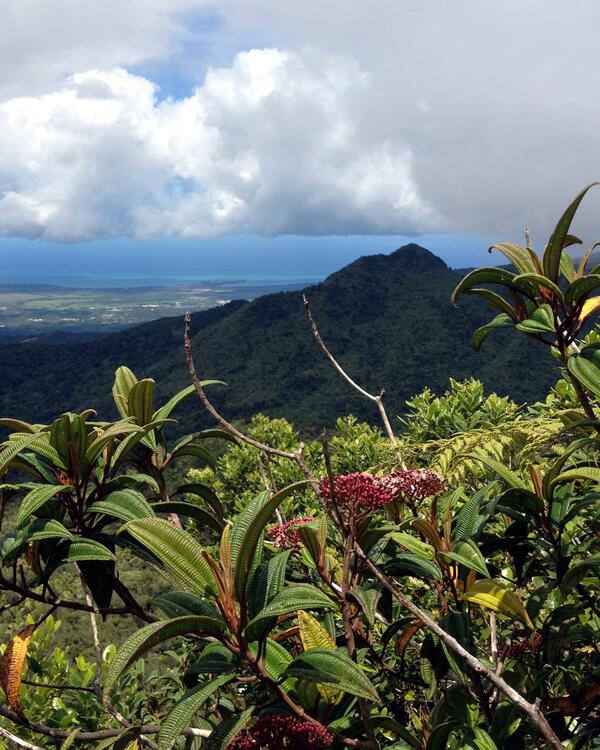 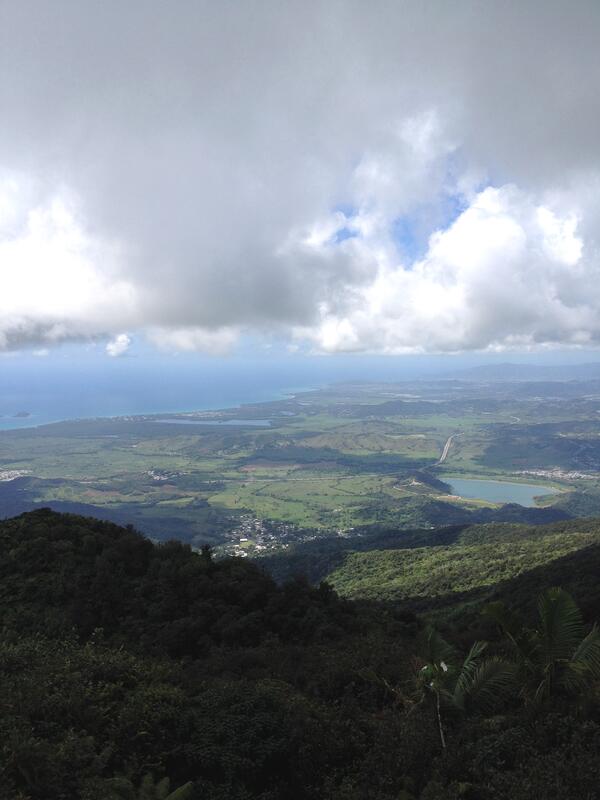 Quantifying the frequency, duration, and elevation range of fog or cloud immersion is essential to estimate cloud water deposition in water budgets and to understand the ecohydrology of cloud forests. The goal of this study was to develop a low-cost and high spatial-coverage method to detect occurrence of cloud immersion within a mountain cloud forest by using time-lapse photography. Trail cameras
By
Water Resources, Climate Research and Development Program, Land Change Science Program
April 30, 2017

Droughts, which can strongly affect both hydrologic and biogeochemical systems, are projected to become more prevalent in the tropics in the future. We assessed the effects of an extreme drought during 2015 on stream water composition in the Luquillo Mountains of Puerto Rico. We demonstrated that drought base flow in the months leading up to the study was sourced from trade-wind orographic rainfal
By
Water Resources, Climate Research and Development Program, Land Change Science Program, New England Water Science Center
July 29, 2014

Like many mountainous areas in the tropics, watersheds in the Luquillo Mountains of eastern Puerto Rico have abundant rainfall and stream discharge and provide much of the water supply for the densely populated metropolitan areas nearby. Projected changes in regional temperature and atmospheric dynamics as a result of global warming suggest that water availability will be affected by changes in ra
By
Water Resources