The mapping and classification of land use and land cover has long been a primary duty for the U.S. Geological Survey (USGS), and remotely-sensed data at the Earth Resources Observation and Science (EROS) Center has served as the backbone of the Survey’s modern efforts.

In recent years, two advancements in remote sensing emerged that promise to revolutionize the field.

The first was Landsat Analysis Ready Data (ARD), a product of a reconditioned Landsat archive that offers the best available imagery, complete with Top of Atmosphere and surface reflectance, processed to a common tiling scheme. The second was the Continuous Change Detection and Classification (CCDC) algorithm, which uses all available Landsat ARD tiles to map land cover and land change at a per-pixel level.

The massive undertaking marks a paradigm shift in land change science, offering spatially and temporally consistent land cover data from 1985 through the present and beyond. But LCMAP is about more than data. Marking shifts from forest to agriculture or agriculture to developed areas or catching conditional changes from fire, drought, or invasive species opens the door to a wide range of scientific inquiry.

“Our work will contribute to understanding how past, present and future land change affects society and natural systems,” said Jesslyn Brown, LCMAP project lead at EROS. “It’s not just about creating the land change data. That’s really the first step – and it’s been a pretty big step – but once we have that data, what do we do with it?”

In the first full week of November, a group of stakeholders from federal agencies and academia got a look at LCMAP’s big first step during a workshop and webinar at EROS, which is located near Sioux Falls, S.D.

The 3-day event offered a rundown of the products and a chance to work with the data from LCMAP test sites for participants, and an opportunity to gather feedback for the EROS team as production begins on LCMAP Version One. All 10 products are expected to be available to the public by early 2020.

Separating the eight land cover classes into primary and secondary products will help users determine mixed land cover and land use, or shifts in land cover that don’t alter classification, such as disturbances like the thinning of forests or the flooding of wetlands due to a hurricane.

“They’re designed to function together as a set,” USGS contractor Chris Barber told attendees. “They’re integrated, and they inform each other. If you see something odd or weird in one, you can go to the quality or the confidence layer or the secondary land cover and you can get more information.”

USGS Research Geographer Roger Auch walked attendees through LCMAP prototype-derived changes in the Piedmont ecoregion, an area between the southern Appalachian Mountains and the East Coast that touches five states.

“This is really just the beginning of what we can do with assessments,” Auch said. “It’s really the tip of an iceberg.”

The workshop also included presentations on validation plots and assessments, and on-site visitors had the opportunity to work with the data through the Timeseries Analysis and Plotting Tool (TAPTool), a software program for time-series analysis of LCMAP products.

Among the attendees were Research Scientist Heidi Sieverding of South Dakota School of Mines and Technology (SDSMT), who was on hand with graduate student Patrick Kozak.

Sieverding and Kozak work to model the impact of mountain pine beetle infestations in the Black Hills on the hydrology of Rapid Creek in western South Dakota. The project is funded through a USGS 104G program,

Rapid Creek supplies some drinking water for Rapid City, S.D., so there is a strong interest in learning how forest damage might influence water quality and water quantity.

“Before any water gets into the stream, it first interacts with the forest,” Sieverding said.

Heidi Sieverding of South Dakota School of Mines and Technology and USGS' Raad Saleh use TAPTool during a workshop for Land Change Monitoring, Assessment and Projection (LCMAP) at the Earth Resources Observation and Science (EROS) Center.

The team used an early iteration of LCMAP to identify impacted areas and to create a baseline for the hydrologic model. They also use U.S. Forest Service (USFS) records of pine beetle damage, but a lack of consistency and accuracy in older records proved challenging.

“The first version of those pest map incidents was literally someone looking out of a plane and going, ‘well, I think it was there,’” Sieverding said. “They kept on getting better, but we needed something that was consistent over time to incorporate into our model.”

LCMAP data gave Sieverding’s team a better outline of those impact areas. Now, with another year of funding for the hydrology work, Sieverding intends to incorporate the new LCMAP products into the model.

“It’s changed a lot, and they’ve made a lot of improvements,” she said during the workshop. “I think it’s going to be used quite a bit in hydrologic models.”

Kozak was impressed by the eight land cover classes and the refinements in the algorithm used to create them. The SDSMT team worked with five main LCMAP products, built before the release of Landsat ARD. The addition of model quality products will serve to improve the science built on LCMAP.

“Some of the other datasets are going to be invaluable if you’re trying to do an assessment of accuracy for change in an area,” Kozak said.

Kozak was pleased with TAPTool, which will eventually provide rapid visualization of time series and harmonic models for any pixel across the U.S.

“This is exactly what we wanted to see,” he said.

After the morning workshops and two afternoons working with TAPTool, Richardson sees the potential of LCMAP in that work, but he also sees potential benefits in other research areas. Seeing the year and magnitude of conversion provided a level of insight that wasn’t available in the past.

“The graphs in TAPTool are effective at representing the data,” Richardson said. “It would streamline our process and become more beneficial with improved image quality.”

Dean Gesch was intrigued by what he saw, as well. Gesch leads the Coastal Changes and Impacts focus area in the Science and Applications Branch at EROS, a team that relies upon tools like light detection and radar (lidar) to map coastal change and model coastal vulnerability. Gesch attended the workshop in person, and a handful of other USGS coastal change researchers listened in for the webinar.

The EROS coastal team hasn’t worked much with Landsat data for two main reasons. First, high-resolution topographic and bathymetric data from lidar are more important in the creation of the team’s topobathymetric digital elevation models (TBDEMs). Second, Landsat data has traditionally required a great deal of pre-processing before it could be used for analysis.

LCMAP changes that. The pre-processing opens the door to comparisons between lidar and Landsat data.

“The fact that all the processing is done ahead of time is huge,” Gesch said.

The value in Landsat for an area of study like coastal change lies in the frequency of observations and depth of the historical record. High-resolution elevation data is often collected in smaller swaths, and never with the 8- to 16-day repeat cycle of Landsat.

“Lidar data is never going to have the temporal frequency that Landsat data does,” Gesch said.

There is work to be done, however. Feedback forms distributed near the end of the workshop had requests that validation data be included in LCMAP Version 2. Other participants noted that field users might struggle to understand the product, due to its complexity.

Boston University’s Curtis Woodcock, a Landsat Science Team member and one of the authors of the original CCDC algorithm, addressed some of those questions after the feedback session in the workshop’s second day.

Beyond validation data, he said, there are incidental products that emerge in LCMAP that users might be interested in, such as synthetic, predictive, cloud-free Landsat imagery from any date of the year, or average annual or interannual variability in phenology data.

“There are a lot of other things that come out of all this processing that we do that might be useful to people,” Woodcock said. “The model coefficients that we use in classification can be used to produce something called spatial temporal features. A simple example would be something like the amplitude of the greenness per pixel over a year. There’s no reason not to make those things available to people, because they’re a lot more useful than just conventional spectral bands.”

There is also more work to do on accuracy assessments as production begins, Woodcock said, particularly with change agreement between reference data and LCMAP data.

And then there’s the issue of data complexity. It will take time for researchers accustomed to existing land cover products to grow comfortable with LCMAP. The workshop was designed to begin that process, but more outreach through future workshops, the provision of interpretation tools, and continued feedback after the Version One release will be necessary.

“They’re complicated and there’s a lot there,” Woodcock said. “It isn’t as simple as just putting it out there. We’re going to have to keep helping people understand what to do and how to use the suite of LCMAP products.”

TAPTool proved popular at the workshop, but the application is a work in progress. The TAPTool prototype is available on site at EROS for collaborators, but the computing power required to access the time series is too high for remote access at this point. LCMAP is working to improve the LCMAP interface using feedback from users.

“We knew our team needed TAPTool to visualize and understand how LCMAP techniques show change over time at any location,” Brown said. “The next challenge is going to be making this valuable tool for exploration more broadly accessible.”

The feedback generated by the workshop and webinars will be invaluable tools for moving LCMAP forward, Brown said. Research and development will continue to be refined and improved as production begin.

“Just because we’re going into production of Version One doesn’t mean we’re done, that we’ve done the best job and we’re just going to let our processes sit,” she said. “There is so much ahead for our team!” 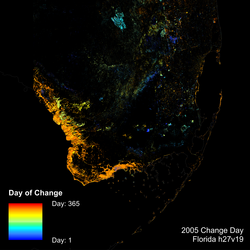 The Land Change Monitoring, Assessment, and Projection (LCMAP) team presented pilot data and offered visitors an opportunity to work with LCMAP data at the Earth Resources Observation and Science Center in November 2018. Read more about the workshop by following this link.Download the presentations from the workshop below. Nov. 6, 2018Workshop Welcome and IntroductionLessons Learned Using Landsat...
link
December 18, 2018

The Land Change Monitoring, Assessment, and Projection (LCMAP) team presented pilot data and offered visitors an opportunity to work with LCMAP data at the Earth Resources Observation and Science Center in November 2018. Read more about the workshop by following this link.Download the presentations from the workshop below. Nov. 6, 2018Workshop Welcome and IntroductionLessons Learned Using Landsat...
Learn More