In a new study, U.S. Geological Survey (USGS) scientists ranked more than 160 species and sub-species of reptiles and amphibians in terms of their vulnerability to vehicle strikes and habitat fragmentation from roadways. Their results are published in the journal Landscape Ecology.

Although most of the public associates vehicle strikes with mammals, reptiles and amphibians can also encounter cars on the road. These animals are often either too small for the driver to notice, or too slow to escape the car’s path. Some species also migrate long distances or have relatively large territories, and may need to risk crossing a roadway to access important habitat. Some species avoid roads altogether, which potentially reduces the amount of available habitat and separates populations that would otherwise mix and increase genetic diversity.

Currently, transportation planning agencies like the California Department of Transportation (Caltrans) use underpasses, overpasses, and physical barriers to reduce the negative effects of roadways on wildlife. However, they can’t manage these side-effects for every species because of limited funding or resources. Species at highest risk of negative road impacts are difficult to identify due to a lack of available data or research, particularly on reptiles and amphibians. As a result, resource managers had to identify high risk species by professional opinion or by the few studies related specifically to roads.

To help provide Caltrans and other transportation agencies with the information needed to prioritize species for management, USGS researchers used road ecology literature to develop an objective ranking system for 166 species and subspecies of native Californian reptiles and amphibians. In the ranking system, an animal’s vulnerability to vehicle strikes or habitat fragmentation depended on the way members of the species used the space around them, and on different aspects of their life history. For instance, species with large home ranges and seasonal migrations were more likely to encounter roads. Likewise, species that took time to reach sexual maturity and had fewer young were more likely to be affected by the loss of members of their population from vehicle strikes.

The scientists found that all turtle and tortoise species, 72% of snakes, 50% of frogs and toads, 18% of lizards, and 17% of salamander species in California ranked at “high” or “very high” risk from potential negative road impacts. Species at very high risk included listed Federal or State endangered or threatened species, like the California red-legged frog (Rana draytonii), Mohave desert tortoise (Gopherus agassizii), and the San Francisco gartersnake (Thamnophis sirtalis tetrataenia). Snakes, turtles, and tortoises tended to rank at higher risk for negative road impacts, since many migrate or have large home ranges, tend not to avoid roads, are long lived, and give birth to relatively few young.

Species that use both terrestrial and aquatic habitats may be particularly susceptible to reduced habitat connectivity. The giant gartersnake (Thamnophis gigas), for example, is a semi-aquatic species found in the Central Valley of California. After losing more than 90% of its historical wetland habitats to agriculture and other forms of human development, this federally and state-listed snake now relies on remaining wetlands, rice fields, and agricultural canals for aquatic habitat. Roads separating the species’ terrestrial and aquatic habitat could affect its populations.

“Overall, this is meant to be a first step in identifying reptile and amphibian species that may be at highest risk from roads within their habitat.  We hope this assessment will help transportation planning agencies and species managers by highlighting species that may need special attention. This can include considering further research and implementing terrestrial and aquatic mitigation solutions to reduce mortality and to maintain or enhance population connectivity,” says Cheryl Brehme, lead author and biologist with the USGS Western Ecological Research Center.

This research was funded by the USGS and Caltrans. For more information, read the paper online, explore the project webpage, and read the news story. Amphibian research in this study falls within the national, USGS-led Amphibian Research and Monitoring Initiative (ARMI).

International Conference for Ecology and Transportation (ICOET) 2019
Results from this study were presented at ICOET in September 2019. Access content related to these presentations below. 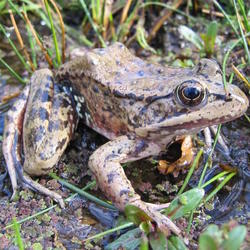 Amphibian populations have declined in many areas around the world. Initially, there was skepticism as to whether the observed declines were merely minor population fluctuations, but it has become increasingly clear that many declines are both real and sustained. At the request of the U.S. Department of the Interior, USGS Western Ecological Research Center (WERC) scientists are supporting the...
By
Ecosystems, Land Management Research Program, Species Management Research Program, Western Ecological Research Center (WERC)
link
October 30, 2017

Amphibian populations have declined in many areas around the world. Initially, there was skepticism as to whether the observed declines were merely minor population fluctuations, but it has become increasingly clear that many declines are both real and sustained. At the request of the U.S. Department of the Interior, USGS Western Ecological Research Center (WERC) scientists are supporting the...
Learn More
link
August 28, 2018

Many amphibians are either too small or too slow to avoid an oncoming car. For some populations of the Federally threatened Yosemite toad (Anaxyrus...