Restoration of ecological systems in wildland areas often involves restoring species to habitats degraded by invasive plant and animal species.  Often, such invasive species exert community level impacts, such as direct competition, but may also alter ecosystem function. For example, invasive plants have been documented to alter fire regimes, soil nutrients and microbes, food webs, and/or pollinator visitation in ways that hinder native plant re-establishment and survival.  As such, restoration cannot be achieved without understanding invasive species dynamics, and their impacts.  It is also crucial to understand how to best re-introduce native species to the ecosystem in an efficient, cost-effective manner.

Restoration of ecological systems in wildland areas often involves restoring species to habitats degraded by invasive plant and animal species.  Often, such invasive species exert community level impacts, such as direct competition, but may also alter ecosystem function. For example, invasive plants have been documented to alter fire regimes, soil nutrients and microbes, food webs, and/or pollinator visitation in ways that hinder native plant re-establishment and survival.  As such, restoration cannot be achieved without understanding invasive species dynamics, and their impacts.  It is also crucial to understand how to best re-introduce native species to the ecosystem in an efficient, cost-effective manner.

The objectives of this task are multifaceted. First, to gain an understanding of why certain species are so invasive in Hawaiʻi, which will help managers better predict which newly introduced species are likely to become problematic over time.  Second, to understand which traits or ecosystem interactions are important to invasive plant spread, in order to better target which lifestage, or dispersal syndrome is best targeted to slow spread into more pristine areas.  Third, to understand the impacts of invasive species, and their relative importance, such that managers know which impacts are important to mitigate before attempting native plant re-establishment.  Fourth, to understand which native species are reestablishing naturally, and the life stages most limiting to the reestablishment of those native species that are not returning naturally.  Finally, to develop best practices for successfully re-establishing native plant species to ecosystems.

The question of why some non-native plants become invasive while others do not is a key question in ecology. Recently, functional traits have gained traction as a tool  to investigate this question and propose invasion mechanisms by examining the similarities and differences between resident species and invaders. Generally, differences suggest that invaders succeed by occupying different niches than resident species while similarities suggest that invaders possess fitness differences that allow them to successfully compete for resources. We studied the differences in functional traits of invasive species and the resident species in the communities that they occupy in Hawai’i Volcanoes National Park, USA across a temperature and precipitation gradient. We found that invasion mechanisms vary widely among invasive plant species. Some common invaders, including Morella faya and Psidium cattleianum occupy a similar trait space as resident communities across the environmental gradient while others, including Hedychium gardnerianum and Melinis minutiflora occupy very different trait spaces than the resident communities which they invade. Notably, the invaders who occupy the same trait space as resident species are found across a greater length of the environmental gradient than other, more specialized, invasive species. Additionally, the generalist invaders displayed greater intraspecific trait plasticity, suggesting that invaders with a high degree of trait plasticity rely on fitness differences to invade more than the specialized invaders, which rely more on niche differences. Overall, these results suggest that invasion mechanism varies across species.   Because of this, simply comparing traits of potential invaders and resident species may not necessarily predict whether a species is likely to invade, although case studies such as these can offer insight into species selection for restoration projects.  Further research on how general this pattern of invasion mechanism of specialist vs generalist invasive species would be useful in further understanding this question.

We implemented a project to better understand invasion mechanisms of different exotic plant species across environmental gradients.  We used a trait based approach, comparing traits between invaders and resident species, to inform whether or not highly invasive species initially invade communities by utilizing empty niches (different traits than residents, suggesting use of different resources) or if successful invaders tend to rely on fitness differences (e.g., higher growth rate or seed set) to invade communities (similar traits to residents, suggesting use of similar resources, but more efficently).  We chose four highly invasive species in Hawaii Volcanoes Park, and returned to sites where they were mapped by Inventory and Monitoring crews in 2009.  We measured traits of invaders and dominant resident species, as informed by percent cover estimates from the original I&M dataset. Traits included leaf area, wetness, and nutrient content, as well as maximum height, seed size and wood density. 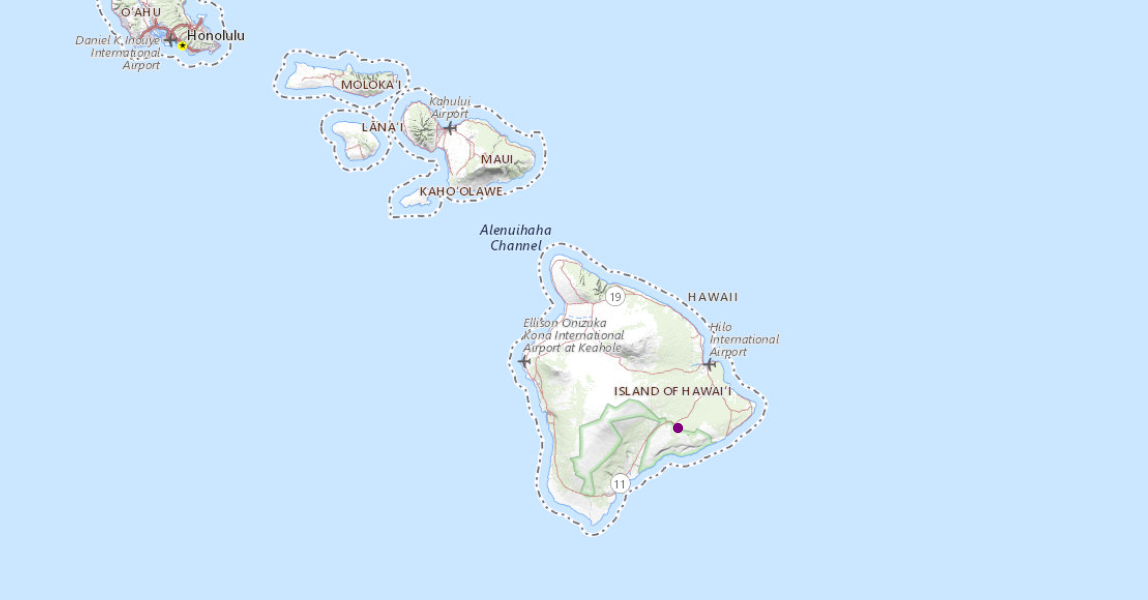 This data release includes data and metadata on 1) the coverage and composition of plants 2) species specific plant traits 3) sampling locations and 4) environmental data. All sites were within Hawaii Volcanoes National Park on Hawaii Island. Plant cover data were obtained from National Park Service Inventory and Monitoring Program. Plant trait data was collected for these plots in 2014. This stud
By
Pacific Island Ecosystems Research Center

Determining the characteristics of non-native plants that can successfully establish and spread is central to pressing questions in invasion ecology. Evidence suggests that some non-native species establish and spread in new environments because they possess characteristics (functional traits) that allow them to either successfully compete with native residents or fill previously unfilled niches.
By
Ecosystems, Pacific Island Ecosystems Research Center
December 1, 2017

Most ecosystems have multiple-plant invaders rather than single-plant invaders, yet ecological studies and management actions focus largely on single invader species. There is a need for general principles regarding invader interactions across varying environmental conditions, so that secondary invasions can be anticipated and managers can allocate resources toward pretreatment or postremoval acti
By
Ecosystems, Pacific Island Ecosystems Research Center
October 24, 2017

Ecosystem vs. community recovery 25 years after grass invasions and fire in a subtropical woodland

Despite a large body of research documenting invasive plant impacts, few studies have followed individual invaded sites over decades to observe how they change, and none have contrasted how compositional impacts from invasion compare to ecosystem-process impacts over a multi-decadal time-scale. Using direct measurements of plant density and composition and of ecosystems processes, we evaluate h
By
Ecosystems, Pacific Island Ecosystems Research Center
September 26, 2017

It has been shown in some cases that nitrogen (N) addition to soil will increase abundance of plant invaders because many invaders have traits that promote rapid growth in response to high resource supply. Similarly, it has been suggested, and sometimes shown, that decreasing soil N via carbon (C) additions can facilitate native species recovery. Yet all species are unlikely to respond to resource
By
Ecosystems, Pacific Island Ecosystems Research Center
January 31, 2017

Large areas of tropical forest have been cleared and planted with exotic grass species for use as cattle pasture. These often remain persistent grasslands after grazer removal, which is problematic for restoring native forest communities. It is often hoped that remnant and/or planted trees can jump-start forest succession; however, there is little mechanistic information on how different canopy sp
By
Ecosystems, Pacific Island Ecosystems Research Center