Browse more than 160,000 publications authored by our scientists over the past 100+ year history of the USGS.  Publications available are: USGS-authored journal articles, series reports, book chapters, other government publications, and more. 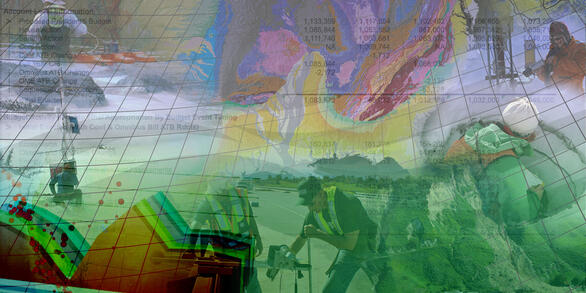 The USGS provides unbiased, objective, and impartial scientific information upon which our audiences, including resource managers, planners, and other entities, rely.

We are focused on some of the most significant issues society faces, and our science is making a substantial contribution to the well-being of the Nation and the world. Learn more about the major topics our research covers and the programs focused on those topics.

A random variable is a function that assigns a value in a sample space to an element of an arbitrary set (James 1992; Pawlowsky-Glahn et al. 2015). It is a model for a random experiment: the arbitrary set is an abstraction of the experimental conditions, the values taken by the random variable are in the sample space, and the function itself models the assignment of outcomes, thus also describing
By
Geology, Energy & Minerals Science Center
August 13, 2021

Geochemistry and mineralogy of metallurgical slag

Slag is a waste product from the pyrometallurgical processing of natural ores or the recycling of man-made materials. This chapter provides an overview of the geochemical and mineralogical characteristics of different types of slag. A review of the analytical methods used to determine these characteristics is also provided. Ferrous slags include blast furnace, steelmaking, and ferroalloy slags; th
By
Mineral Resources Program, Geology, Energy & Minerals Science Center
August 12, 2021

Paleoclimate record for Lake Coyote, California, and the Last Glacial Maximum and deglacial paleohydrology (25 to 14 cal ka) of the Mojave River

Lake Coyote, California, which formed in one of five basins along the Mojave River, acted both as a part of the Lake Manix basin and, after the formation of Afton Canyon and draining of Lake Manix ca. 24.5 calibrated (cal) ka, a side basin that was filled episodically for the next 10,000 yr. As such, its record of lake level is an important counterpart to the record of the other terminal basin, La
By
Geology, Minerals, Energy, and Geophysics Science Center
July 31, 2021

With approximately half the world’s population living less than 65 miles from the ocean, coastal ecosystems are arguably Earth’s most critical real estate. Yet coastlines are among the more difficult features to accurately map; until now, no comprehensive high-resolution geospatial dataset existed. This chapter presents a new map and ecological inventory of global coastlines developed by Esri, the
By
Core Science Systems, Land Change Science Program
July 29, 2021

The steppe eagle (Aquila nipalensis) is a globally endangered, full migrant raptor that breeds in the southern temperate zone from European Russia in the west to eastern Mongolia, Dauria and adjacent north-eastern China in the east. It winters in Africa, the Middle East and Southern and South-Eastern Asia, and migrations can sometimes entail journeys > 10,000 km in length. Kazakhstan, Russia and M
By
Ecosystems, Forest and Rangeland Ecosystem Science Center
July 29, 2021

Red-footed falcons (Falco vespertinus) are a small, long-distance and obligate migrant falcon that breeds at the forest-steppe interface in Eurasia and winters in Southern Africa. Research carried out with geolocators and satellite transmitters show that during the southbound migration Central Asian birds migrate through the Caucasus and the Middle East, while those from Eastern Europe cross the E
By
Ecosystems, Forest and Rangeland Ecosystem Science Center
July 29, 2021

Eastern imperial eagles are a short-, medium-distance, partially-migratory, or even non-migratory, raptor that breeds at the forest-steppe interface in Eurasia and winters in Northern Africa, the Middle East or South Asia. Migratory strategies of imperial eagles are diverse. Eagles breeding in Central and Southeast Europe and south of the Black Sea usually are year-round residents or partial- or s
By
Ecosystems, Forest and Rangeland Ecosystem Science Center
July 7, 2021

Sea otters are marine specialists but diet generalists, which feed primarily on benthic mega-invertebrates (i.e., body dimension >1 cm). They locate and capture epibenthic and infaunal prey with their forepaws by relying on vision and tactile sensitivity during short-duration dives (generally
By
Ecosystems, Alaska Science Center