The U.S. Geological Survey is celebrating the 125th anniversary of its national program for topographic mapping (1884–2009). Topographic maps became a signature product of the USGS because the public found them—then and now—to be a versatile tool for viewing our Nation's vast landscape. During the 20th century, more than 55,000 large-scale topographic maps were published by the USGS, culminating in complete coverage of the contiguous 48 States in 1991. In the last quarter-century, the rise of the digital age, the rapid growth of Internet communications, and the technology of geographic information systems (GIS) have transformed topographic mapping science, enabling the electronic construct of The National Map of today.

On December 3rd, the USGS observed the 125th anniversary of its topographic maps as well as released two new mapping products at a special event held at the USGS National Center in Reston, Virginia. Videos, Pocasts, pictures, proceedings, and other information products are available at this site.

A Celebration of 125 Years of Topographic Mapping 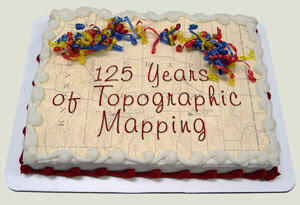 Thank you for joining us in person or in spirit to celebrate 125 years of USGS topographic mapping. We appreciate your participation, and your enthusiasm for the program of providing topographic information, Internet services, and maps to meet the needs of the Nation.

We also look forward to working with many of you as we embark on the next chapter in this endeavor. Please visit the web site for The National Map, explore the new US Topo digital topographic maps and the new viewer for The National Map, and give us your ideas of how we can improve these products and services. 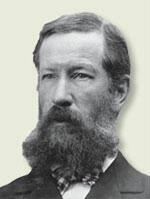 An early American geographer often considered to be the father of American topographic mapping, Henry Gannett (1846–1914) began mapping topography as a member of the Hayden Geological Survey of 1871. Many USGS mapmaking methods and standards were later developed under his leadership, and the USGS Geography Program was established under his direction.

While working as a geographer for the U.S. censuses of 1880, 1890, and 1900, and the Philippine, Cuban, and Puerto Rican censuses, Gannett became interested in place names. His efforts to resolve difficulties caused by the confusion of names contributed to the establishment in 1890 of the U.S. Board on Geographic Names.

Mapping the Grand Canyon in 1923: The Birdseye Expedition

View film footage from the 1923 Grand Canyon expedition (Mapping the Grand Canyon in 1923: The Birdseye Expedition, part 1). This is the earliest film made by the USGS and one of the first black and white films distributed nationally.

In the summer of 1923, the USGS organized an expedition to make a new map of the Grand Canyon, which was the last stretch of the Colorado River that had not been accurately surveyed. Up until that time, only 27 men were known to have traversed the length of Marble and Grand canyons and of those, only two had any scientific knowledge (one of those two men was John Wesley Powell, the second director of the USGS, who led the first expedition down the river in 1869).

Their party also included a cook, four boatmen (whose skill and nerve were crucial to the success of the expedition), a combination rodman/boatman, and four wooden boats.

Birdseye was charged with making an unbroken level survey line through Marble and Grand canyons and running the survey line up side canyons. In addition, the party was to survey possible dam sites under the direction of LaRue (Westwood, 1992).

The expedition launched from Lees Ferry on August 1, 1923. They completed the survey at Diamond Creek on October 13 and landed the boats at Needles, California on October 19, 1923.

Birdseye was especially suited for the arduous work of leading the expedition. He was a highly skilled organizer whose surveying experience included Mount Rainier and the crater of Kilauea in Hawaii.

Burchard, who did most of the mapping work, had already surveyed the lower stretches of the Colorado River from thirty-five miles inside the Grand Canyon to the Boulder Canyon dam site and on to Needles, California. Of "powerful physique, great endurance, and a cool, steady head," Burchard was an ideal man for the rough work (Westwood, 1992).

Except for the first day, Burchard made the entire Colorado River survey. Burchard and Birdseye shared the task of surveying the many side canyons they encountered.

During the expedition, minor injuries were frequent. On October 1, Burchard fell backward onto a barrel cactus with fishhook spines. Fortunately, he had earlier repaired a hole in the seat of his pants using the leg of a discarded boot, and was thus saved from serious damage.

Later that day, he fell again, landing on the corner of his instrument box and fracturing a rib. Burchard was in serious pain, but continued with his demanding work. His fortitude was rewarded on October 13 when he spotted a pyramid of white rocks that he had erected three years earlier to mark the highest upriver point of his 1920 survey. When the 1920 and 1923 surveys were tied together, their elevations were within four and half feet of each other. This was a remarkable achievement considering that many of the elevation angles were measured using survey shots as much as half a mile long.

The expedition was met by friends and family members at several points where trails came down the canyon walls to the river. On August 19, boatman Emery Kolb's daughter, Edith, joined their camp for a day at the bottom of the Hance Trail at Hance Rapid. Kolb consented to let Edith ride the rapid as a passenger in Leigh Lint's boat, making her the first woman to run a dangerous rapid in Grand Canyon. "Edith was wet but game, showing good nerve" (Westwood, 1992).

At the home of the USGS hydrographer stationed at the mouth of Bright Angel Creek in Grand Canyon National Park, August 27, 1923. E.C. LaRue and his wife are on the far left. Roland Burchard is on the far right.

Boatman Elwyn Blake wrote: "There was a finger of granite extending into the river. As a [surveying shot] from the head of the rapid to the foot would be too long for the instrument, the feasibility of trying to land behind the finger was discussed. Such is the position of the boatman who carries the instrument...that he must attempt the impossible and must land...within a half mile of the last point in the survey line, regardless of the type of water or shoreline....I pulled toward the granite finger and managed to thrust the prow into the surging backwater below" (Westwood, 1992).

The wooden boats were all 16-18 feet long and each weighed almost 900 pounds. In the course of the 251-mile trip, the expedition ran 84 rapids and many other stretches of rough water. All the men wore cork life jackets, and in rough water the passengers lay face down on the decks, clinging to life lines strung along the gunwales. They only portaged the boats around three rapids that were deemed too dangerous to run. Birdseye wrote, "It was man-killing work to handle the 900 lb. boats over the rocks and almost as hard to portage the equipment" (Westwood, 1992).

Radio messages came in clearly at all points in the Grand Canyon where the outfit was set up. At El Tovar, Birdseye sent a telegram to Washington D.C. announcing that the party was safe; two hours later, in the depths of the canyon, he heard his own message as it was broadcast to the nation by radio.

On the evening of August 2, the men set up the radio and immediately learned that President Warren G. Harding had died just 45 minutes earlier. On a later broadcast that same evening, the announcer directly addressed "that heroic band of engineers braving death in the rapids of the Colorado."

On September 18, rainstorms upriver caused an unexpected flood that caught the expedition by surprise. The men spent a sleepless night repeatedly moving their camp and the boats to higher ground as the river rose 14 feet. The water rose an additional 7 feet the next day (water volume went from 10,000 ft3/s to 125,000 ft3/s in 24 hours). The party had to wait three days for the river to go down far enough to expose their survey point so they could continue their work. When they finally arrived at Diamond Creek many days later than expected, they were shown newspaper headlines reading, "HOPE NOT GIVEN UP FOR RIVER PARTY!" (Westwood, 1992).

Online Public Lecture
In Search of Dam Sites: The USGS Expedition of 1923 in the Grand Canyon, an excellent lecture presented by Diane Boyer of the USGS (co-author of the book listed above) on November 13, 2006.

Images
High-resolution versions of all USGS photographs from the 1923 Grand Canyon Expedition are available for free download at the USGS Earth Science Photographic Library. Do a keyword search using "Grand Canyon" and "LaRue" and a keyword search using "Grand Canyon" and "Birdseye". These images are in the public domain and can be freely used without permission. All we ask is that you credit the USGS as the source.

Film
View film footage from the 1923 Grand Canyon expedition (Mapping the Grand Canyon in 1923: The Birdseye Expedition, part 1). This is the earliest film made by the USGS and one of the first black and white films distributed nationally.

Find more informaton about science in the Grand Canyon at the USGS Grand Canyon Monitoring and Research Center.