The USGS Land Change Monitoring, Assessment, and Projection (LCMAP) initiative focuses on the creation of annual map products and the application of those products to advance the understanding of land surface change for the scientific community, the land management community, and the general public.

Both the map products and the work performed to validate them offer insight into the multitude of factors that impact land change patterns in the United States. 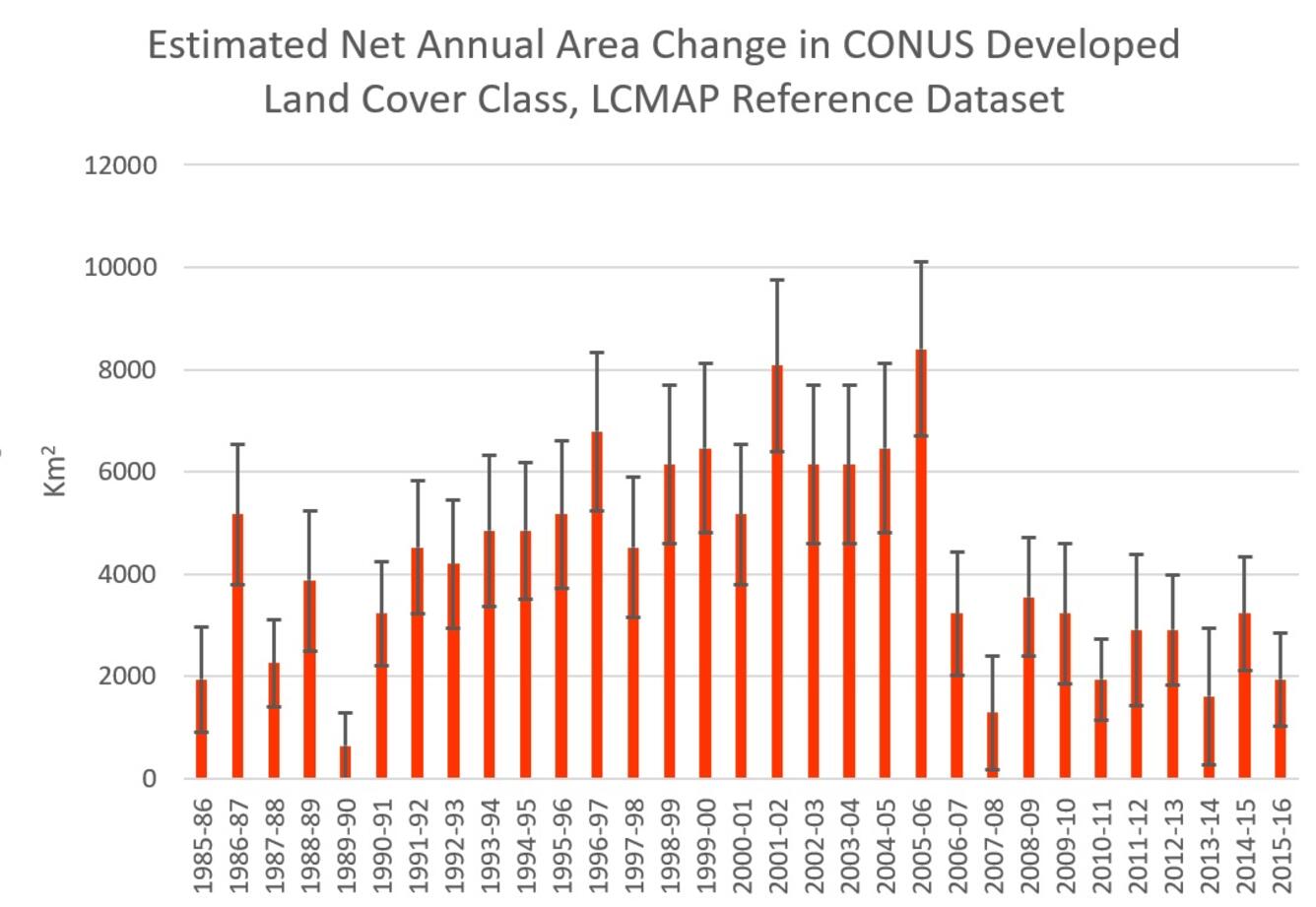 LCMAP’s independent validation reference dataset is currently made up of 25,000 locations across the U.S., each tied to the geographic coordinates of a randomly-selected Landsat pixel. Changes to those 25,000 plots of land are investigated through a variety of sources, such as high-resolution imagery, to verify what type of change actually occurred.

While the primary purpose of the reference data is to estimate accuracy of the Primary Land Cover map product in its characterizations of land cover composition and land cover change, it can also be used to create standalone estimates of change.

The graph above shows what those 25,000 reference plots reveal about annual growth in developed (urban and built-up) land cover in the U.S. from 1985 through 2016, even before factoring in LCMAP’s Primary Land Cover map results.

Each red bar above represents the area of growth in developed land per year in square kilometers. The double-capped black lines at the top of each year’s red bar represent the uncertainty of LCMAP’s estimate of developed land cover growth for the year. The gap between the black and red lines represent uncertainty. The inclusion of results from the completed LCMAP's Primary Land Cover map product should reduce that gap.

Taken independently, however, the LCMAP reference dataset shows that the 1990s and the first half of the 2000s were “boom” years for development, with almost all annual estimates of net change in the 4,000-8,000 square kilometer range. The pattern changed dramatically in 2006, with growth in developed land cover dropping initially alongside the collapse in the U.S. housing sector and sinking more dramatically still as the Great Recession took hold in 2008.

It’s no surprise that LCMAP’s reference dataset would reflect the land cover impact of large shocks to the U.S. economy. What is surprising, however, is that post-recession growth in satellite-based observations of developed land cover has yet to return to the general levels seen throughout the 1990s and early 2000s.

The LCMAP Assessments team is currently exploring the drivers of this and other change patterns discovered in the reference data and map product results, and will report its findings as part of the first geographic assessment of over 30 years of land surface change estimated from Version 1 LCMAP Primary Land Cover.