Many factors determine how human beings modify the earth's landscape. Land-cover change is inherently a local event, yet broader scale socioeconomic and biophysical factors also affect how humans make decisions to use the landscape. Projecting future land cover requires modelers to account for driving forces of land-cover change operating at scales from local ("bottom-up") to global ("top-down"), and how those driving forces interact over space and time. As a result of the high level of uncertainty associated with predicting future developments in complex socio-environmental systems, a scenario framework is needed to represent a wide range of plausible future conditions. 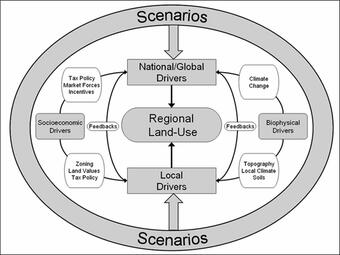 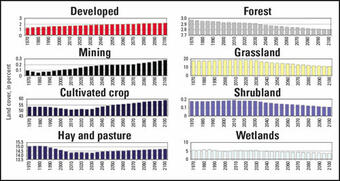 Spatial Allocation :: The "spatial allocation" component of FORE-SCE produces spatially explicit maps of land cover for each year of a simulation. FORE-SCE works by placing individual patches of land cover on the landscape, with patch characteristics based on historical patch characteristics for a given geographic region. FORE-SCE determines where to place these patches by using "suitability surfaces", images that depict the relative suitability of a pixel for supporting a given land-cover type. Suitability surfaces are constructed by examining statistical relationships between existing land-cover distributions, and variables such as topography, soil characteristics, climate, and distance to transportation networks. The number of land-cover patches for a given land-cover type is dictated by the "demand" component of FORE-SCE, with an adequate number of the correct land-cover class patches placed on the landscape until "demand" is met for a given yearly iteration. Modeling then proceeds with the next year and the process repeats until all years in a simulation are complete.

More information on the FORE-SCE model and land-cover modeling concepts can be found on the "Publications" page.