Extensive glaciers covered Mount St. Helens and the surrounding vicinity during major Ice Ages of the past few hundred thousand years. Much of the geologic record of these events is sparse and incomplete, having been removed by erosion or buried by volcanic deposits.

The largest glacier recognized extended more than 40 km (25 mi) down the Lewis River valley from the Mount St. Helens area about 300,000– 250,000 years ago. This glacier was part of an extensive system of mountain glaciers that covered much of region around the volcano.

In the Pacific Northwest, the last major ice age is called the Fraser Glaciation, which lasted from about 25,000 to 15,000 years ago. Glaciers of this age were not as extensive as those of some earlier ice ages, extending only about 11 km (7 mi) south of the current summit. Mount St. Helen’s Cougar eruptive period coincides with the earlier part of the Fraser Glaciation, the Swift Creek eruptive period with the latter and continuing as the ice age ended. Consequently, glacial deposits are found within volcanic deposits of these eruptive periods.

Following a long dormant period that ended about 3,900 years ago, Mount St. Helens began to grow to its pre-1980 elevation. The creation of a high cone resulted in the development of new glaciers. By the time of the 1980 eruption, 11 named glaciers radiated down the flanks of the volcano along with two small unnamed glaciers and numerous perennial snowfields. The largest glaciers extended about 2.5 (1.5 mi) from the ice-filled summit crater. The cataclysmic landslide and eruption of May 18, 1980, largely destroyed the glaciers that had existed on the flanks of Mount St. Helens, removing about 70% of the volcano's glacier mass.

The landslide and eruption of Mount St. Helens on May 18, 1980, created a deep, north-facing, amphitheater-like crater. Over time, rock debris and avalanche snow shed from the steep crater walls, combined with a large annual snowfall, created a thick deposit of snow and rock between the 1980–86 lava dome and the crater walls. By September 1996 it was clear from photographs and observations that a glacier had formed. At an elevation of about 2,000 m (6,561 ft), the glacier would not exist on a typical Cascade mountain nearby. The steep crater walls shade the glacier from sunlight during most of the year and rock debris mantles its top, which provides a perfect environment for the newest and one of the few expanding glaciers in the Cascade Range.

By 2004, the glacier had grown into a horseshoe-shaped feature that wrapped around the 1980–86 lava dome. In late September 2004, earthquake swarms rocked the volcano and the southern part of the glacier cracked and bulged. A small explosion on October 1 reamed a crater through the glacier, which was followed about 11 days later by emergence of a lava spine. The lava spine grew and ran into the south crater wall in mid-November 2004 and split the glacier into two arms. Continued growth of the lava dome compressed the two glacier arms against the east and west crater walls. As a result, the two glacier arms doubled in thickness, and the rate of flow sped up to an average of about 30–60 cm per day (1–2 ft per day). The two arms merged on the north side of the 1980–86 lava dome in Spring 2008. Since then the glacier's advance has slowed to an average rate of about 10 cm per day (4 inches per day).

On June 6, 2006, the U.S. Board on Geographic Names officially approved the name "Crater Glacier" for the glacier that had formed within Mount St. Helens' crater and survived the eruption that began in 2004.

Owing to the porous nature of the crater floor, water runoff from the crater occurs primarily through springs and seeps in the heads of Loowit and Step channels rather than in streams emanating directly from Crater glacier. 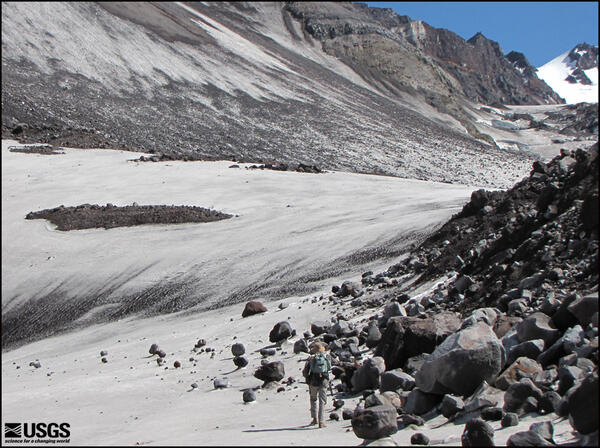 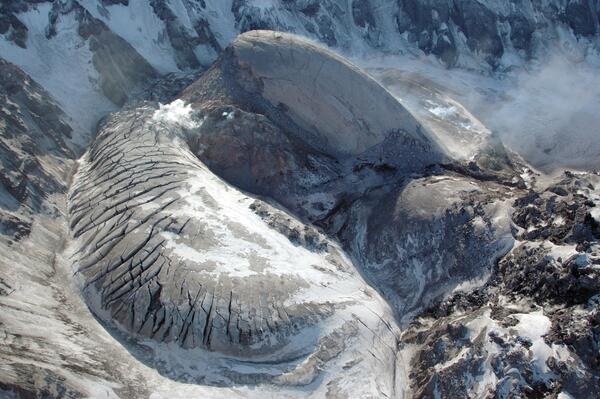 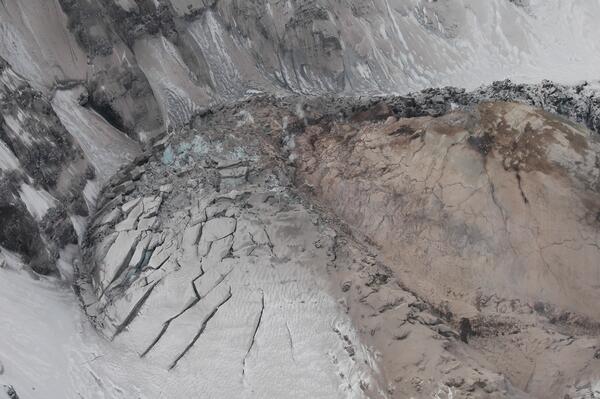