As the residents of Woodward Way, which runs parallel to Peachtree Creek near Northside Drive know too well, very heavy rainfall can cause Peachtree Creek to overflow its banks and send waters flooding into their houses. A number of houses on Woodward Way have actually been raised onto stilts. The massive flooding of Sept. 2009 once again caused major flooding damage to houses in this area.

Base flow and flood conditions comparison

The pictures below compares normal base-flow conditions (river stage at about 3 feet) on the left with the flooding in Sept. 2009 (river stage about 20 feet).

The Peachtree Creek watershed upstream of the U.S. Geological Survey (USGS) streamflow gaging station at Northside Drive (the blue circle on the map) is of vital importance to the metro Atlanta region. The watershed encompasses an area of 86.6 square miles in the northeast quadrant of the metro Atlanta area. Runoff in the watershed enters Peachtree Creek, which, in turn, flows into the Chattahoochee River a few miles to the west. The altitude at the gaging site is about 764 feet above sea level.

What is a watershed?

A watershed is an area of land that drains all the streams and rainfall to a common outlet such as the outflow of a reservoir, mouth of a bay, or any point along a stream channel. The word watershed is sometimes used interchangeably with drainage basin or catchment. Ridges and hills that separate two watersheds are called the drainage divide. The water resources of a watershed include surface water–lakes, streams, reservoirs, and wetlands–and all the underlying groundwater.

A watershed is a precipitation collector

Most of the precipitation that falls within the Peachtree Creek watershed upstream of Northside Drive collects in the creek and eventually flows by the Peachtree Creek gaging site. Many factors, some listed below, determine how much of the streamflow will flow by the monitoring site. Imagine that the whole basin is covered with a big (and strong) plastic sheet. Then if it rained one inch, all of that rain would fall on the plastic, run downslope into gullies and small creeks and then drain into Peachtree Creek. Ignoring evaporation and any other losses, then all of the approximately 1,512,000,000 gallons of water that fell (you can use our interactive rainfall calculator to find out how many gallons of water fall during a storm) as rainfall would eventually flow by the Peachtree Creek monitoring site.

Not all precipitation that falls in a watershed flows out

To picture a watershed as a plastic-covered area of land that collects precipitation is overly simplistic and not at all like a real-world watershed. A career could be built on trying to model a watershed water budget (correlating water coming into a watershed to water leaving a watershed). There are many factors that determine how much water flows in a stream (these factors are universal in nature and not particular to a single stream):

Why doesn't a stream go dry after it stops raining?

Many streams in Georgia and throughout the world typically continue to flow even after weeks without rain. The amount of water flowing is often referred to as "base flow". Water in the streams during these times comes from groundwater coming from the soil along the stream bank. The groundwater often flows in the direction of the land slope, toward the stream, where it seeps out of the stream bed and banks. Base flow is critical to the stream ecosystem, as well as for human uses of the stream during drought periods. The amount of base flow in a stream depends on the amount of precipitation in the watershed in the previous months, the amount of infiltration in the watershed, and the characteristics of the groundwater aquifers that may supply water to the streams.

There are many pieces of equipment, both mechanical and electronic, that are installed at the Peachtree Creek monitoring site to measure, record, and transmit both water-quantity and water-quality information. The U.S. Geological Survey (USGS) monitors "real-time" streamflow and water-quality conditions for thousands of streams nationwide and in Georgia. USGS has continously monitored streamflow at Peachtree Creek since 1958 and has recently begun monitoring water-quality parameters. A number of USGS National Water Information System (NWIS) Webpages displaying water data for Peachtree Creek are available (links below open a new window):

The job of the water scientist

Long-term monitoring of water resources requires knowledge, skills, and commitment developed over decades by the men and women of USGS. USGS streamgagers and hydrologists must develop and follow precise scientific procedures to assure the quality of water measurements and to properly interpret the meaning of water data. High-quality data is essential for the wise management and use of water resources. Technological advances have improved the amount and timing of data, and made stream monitoring more complex, but these have not reduced the need to physically measure the stream over the range of possible flows, particularly during floods, whenever they occur.

This picture shows one type of USGS gage structure which is attached to a stilling well (the vertical pipe), and the shelter contains measurement and data-transmission instruments. Equipment in the gage house continuously measure stream height (stage) every 15 minutes. Stilling wells are used at locations where they can built next to the stream, but other systems monitoring water pressure can be used in different situations.
Find out more.

The box on top of the pipe contains a measuring instrument (data logger) that has a pulley with a metal tape holding a float at one end. As the water in the stream rises and falls, the water in the vertical metal pipe also moves and the float on the wire goes up and down with the water level. As the wire moves, the pulley turns, which changes the stream-stage (gage height) reading. The stream-stage readings are recorded by the data logger. Peachtree Creek has a solar-powered GOES satellite system that transmits and uploads stream-stage and water-quality measurements directly to USGS databases to give virtually "real-time" readings of stream stage, streamflow (computed using the stream stage/streamflow relation), and water-quality measurements.

► Find out how USGS measures streamflow.

Like other streams in urban settings, Peachtree Creek is affected by the pressures of urban development, and thus, the potential for water-quality problems are high. Possible sources of problems are:

It is important to monitor water quality not only to establish baseline water-quality information about Peachtree Creek, but also to allow for timely notification when water quality changes. USGS recently installed an automated water-quality monitoring site at Peachtree Creek. In the picture, the white tube on the right contains probes and instruments submerged in the stream. The structure on the left houses the data-transmission and automated stream-sampling and storage equipment.

The tube shown in this picture contains probes that continually measure temperature, specific conductance, dissolved oxygen and pH. It also contains tubes to collect water samples during storm events and store the samples in the refrigerated housing structure. It is important to sample the water during storm events, because it is during high water that some water-quality problems, such as high levels of bacteria, sediment, and nutrients (nitrogen and phosphorus) occur.

The U.S. Geological Survey (USGS) uses the term "stream stage", or stage or gage height, measured in feet above an arbitrary altitude, to refer to how high streams are. During dry periods (baseflow conditions), Peachtree Creek typically is at a stage of about 3 feet. During a typical flood, Peachtree Creek might reach a stage of 17 feet. At 17 feet, streamflow is almost 150 times greater (about 5,750 cubic feet per second (ft3/s)) than at 3 feet. On March 8, 1998 stream stage reached 20.16 feet, which means that about 8,800 ft3/s of water was flowing. It is easy to imagine the magnitude of this flood when, at a stage of 3 feet, only 67 ft3/s of water is flowing.

When Peachtree Creek overflows its banks, water floods nearby streets and can inundate yards and basements of nearby houses, as well as clog streets with mud and debris. High water can also cause problems at bridges. This picture shows a huge pile of debris on the upstream section of the bridge at Northside Drive.

The debris contains whole tree trunks that must weigh tons. If enough debris piled up above the bridge then detrimental effects, such as scouring out of the bridge piers, could eventually occur, or the pipes holding back the debris could break. Local governments have to bring in cranes and heavy equipment to remove this debris.

Peachtree Creek reacts very quickly when heavy rains occur. As is typical with smaller streams in urban areas, a heavy rain can cause the stream to rise in a matter of hours or even minutes. Also, as is typical with smaller urban streams, high water peaks quickly and then falls quickly; thus, streamflow at Peachtree Creek can go from base flow to flooding and back to near base flow in a single day. 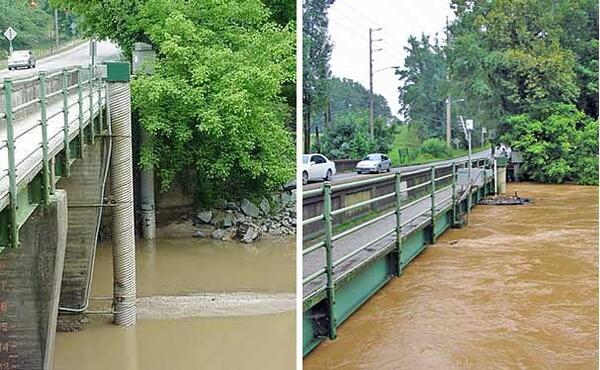 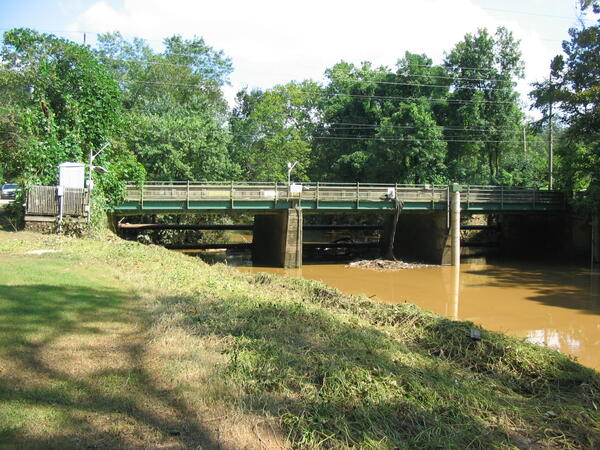 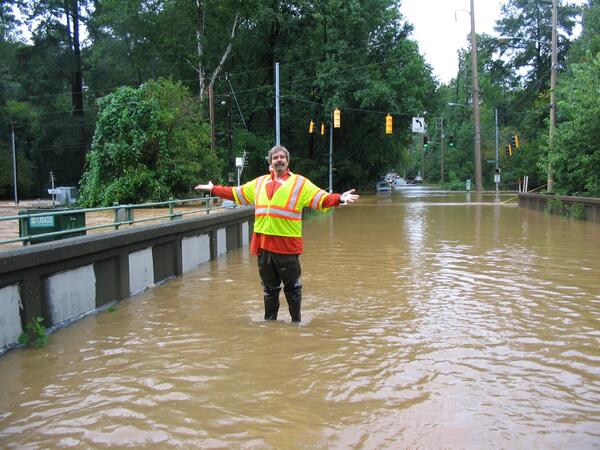 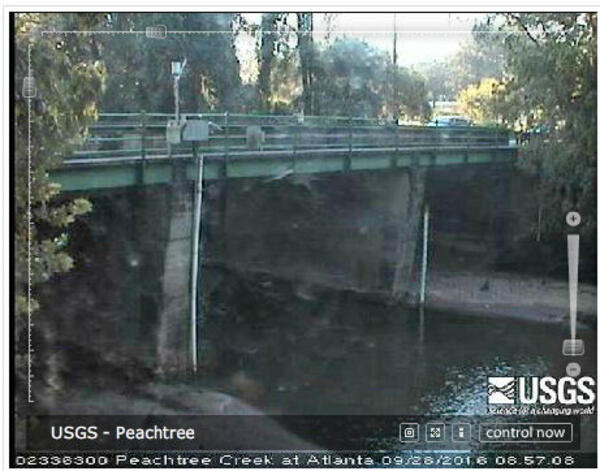 Effects of flow alterations on trout, angling, and recreation in the Chattahoochee River between Buford Dam and Peachtree Creek

In 1974 county governments in the Atlanta vicinity realized that demands on the Chattahoochee River for water supply plus the streamflow required for water quality nearly equaled the minimum flow in the river. Increased demands for water supply in the following years could not be supplied under the then existing flow regime in the river. In response to the anticipated shortage of water, the A