Dr. Nathan Stephenson and colleagues seek to determine what changes are occurring in forests, why they are occurring, and what they mean. For example, they have documented a long-term, apparently climatically-induced increase of tree mortality rates in otherwise undisturbed old forests across the western U.S., implying that these forests could become net sources of atmospheric carbon dioxide. 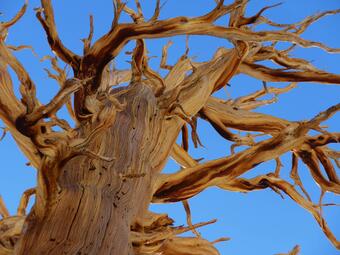 With more than 400 trees for every man, woman, and child on Earth, forests provide substantial feedback to the global carbon cycle and climate system. Forests provide humans with economically important and often irreplaceable ecosystem products and services, such as clean water, wood, biodiversity, and recreational opportunities. Additionally, forests sequester the majority of the terrestrial biosphere’s carbon, making them key components of the global carbon cycle. However, ongoing global changes -- particularly interacting changes in climate, land use, and disturbance regimes -- have the potential to rapidly alter forests in undesirable ways, such as by converting forest to shrubland as a result of catastrophic wildfire. For society to anticipate and mitigate these increasing threats to forests, we must greatly improve our ability to understand and predict forest responses to environmental changes.

Over the last few decades tree mortality rates have more than doubled in old forests of the western U.S., a probable consequence of regional warming. On top of this background of chronic change, California's 2012-2016 warm drought was unprecedented in at least the last 120 years, and perhaps much longer. We are taking advantage of the drought as a possible preview of a future in which "hotter droughts" (otherwise normal droughts whose effects on ecosystems are amplified and extended by higher temperatures) becomes more frequent and severe. Tree mortality reached unprecedented levels in our low elevation forest plots, allowing us to better elucidate climatic drivers.

We aim to address several fundamental questions: Are spatial patterns of forest mortality predictable a priori? What are thresholds of mortality? What are the major agents of mortality during hotter drought? What are consequences for carbon storage? What is the nature and timing of forest recovery?

The Leaf to Landscape study (PBS video), jointly funded by USGS-CLU, NPS, the USGS Southwest Climate Science Center, UC Berkeley, and Stanford University/Carnegie Institute of Science, is a key part of this effort. By focusing on three main components we hope to answer the above questions. (1) Tree physiology (directly measured by climbing and measuring more than 100 trees), which is strategically co-located with (2) population monitoring (ground surveys of foliage dieback and tree death), thus providing calibration and validation for (3) high-resolution LiDAR plus hyperspectral remote imagery. Particular emphasis will go toward integrating these components with our plot-based measurements of population dynamics, with the ultimate goal of producing forest vulnerability maps for much of California.

An introduced fungus, white pine blister rust, has contributed to sometimes dramatic population declines in species of five-needled pines (“white pines”) across the West (and U.S. Fish and Wildlife Service even determined that one species – whitebark pine – warrants listing). Preliminary data suggest that the disease has made substantial inroads into previously unaffected pine species in the Sierra Nevada. White pines typically act as critical foundation species in forests, and their loss can have complex, cascading effects. Sequoia and Kings Canyon National Parks (SEKI), in California’s Sierra Nevada mountain range, have an unusually rich complement of five white pine species that are all potentially threatened by white pine blister rust. To quantify the rust’s spread and severity, develop predictive maps, and identify potentially rust-resistant tree as seed sources for restoration, we are conducting a 20-year resurvey of 154 permanent blister rust monitoring plots. Our ultimate goals are to determine whether the extent, severity, and rate of spread of blister rust collectively merit management responses, and, if so, to assess potential response options.

Hotter Droughts, Forests and the Leaf to Landscape Project

California's hotter droughts are a preview of a warmer future world.