The day is coming when satellite data users in countries across the planet will be able to access analysis ready data from multiple sensors with minimal effort and little preprocessing required. When that happens, the U.S. Geological Survey (USGS) and Landsat will have played major roles in making it so. 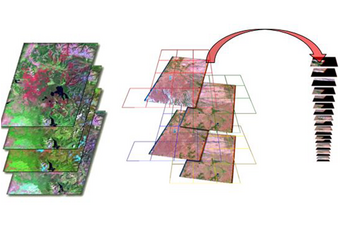 For a number of years now, the Committee on Earth Observation Satellites (CEOS) has been working to enable countries and international organizations to quickly access and process satellite data into CEOS Analysis Ready Data for Land (CARD4L) products. By definition, CARD4L data provided by participating satellite systems are to be “processed to a minimum set of requirements and organized into a form that allows immediate analysis with a minimum of additional user effort and interoperability both through time and with other datasets.”

In a nutshell, that means the data should be easy to use. Users shouldn’t have to process the data any further. And data meeting CARD4L specifications should be measurement-based, comparable in space and time, with sufficient per-pixel metadata to enable users to select “observations of interest” for their analysis.

“When we say measurement-based, it’s something as familiar as surface reflectance or surface temperature,” said Steve Labahn, USGS’ Landsat International Ground Station Network Manager and CEOS Project Manager. “It’s something you’re familiar with that you can compare, and it doesn’t matter what sensor the data came from. It shouldn’t matter if the data are from Landsat, Sentinel-2, or Resourcesat-2. You should just be able to use them as a measurement—a direct observation of a specific geophysical parameter.”

CEOS already has a good view of CARD4L thanks to the USGS Earth Resources Observation and Science (EROS) Center’s development of Landsat Global Analysis Ready Data. Targeted for production in January 2019, Landsat Global ARD will be CARD4L compliant and primed for interoperability with the European Space Agency’s (ESA) Sentinel-2 satellite system—and potentially other systems down the road.

The fact is, USGS’ plan for Landsat Global ARD and its influence on CEOS CARD4L products is as robust as any satellite system in operation today across the globe. And the world has taken note of that. International Cooperators operating Landsat ground stations for USGS met in late October in Rapid City, SD, and voiced their support for what the Landsat ARD road map will mean for the greater worldwide community.

The ICs “strongly support the leadership and enterprise of the (USGS) in developing the systems, methods, and processes to deliver Global Landsat ARD,” they wrote in a statement, adding that they “consider that Global Analysis Ready Landsat data may well be the ‘next big step’ in increasing the application of Landsat data in society, including using Landsat data with other government and commercial data streams.”

The dream for CARD4L was actually conceived in the work of the Land Surface Imaging Virtual Constellation (LSI-VC) group within the CEOS structure over the last several years. Led by co-leads Jenn Lacey of USGS EROS, Adam Lewis with Geoscience Australia, and ESA’s Bianca Hoersch (who has since transitioned to another role within ESA and thus turned her co-lead duties over to her colleague Susanne Mecklenburg), the LSI-VC successfully shepherded the endorsement of the CARD4L definition at the CEOS Plenary in Brisbane, Australia, in 2016.

With that definition taking shape, the 2016 CEOS Chair—Australia’s Commonwealth Scientific and Industrial Research Organisation (CSIRO)—led a CEOS study through the Ad Hoc Team on Future Data Architectures (FDA), looking in part at how CARD4L would fit into FDA. Then when EROS Director Dr. Frank Kelly and the USGS ascended to the CEOS Chair in 2017, they continued emphasizing FDA and CARD4L, and added a third initiative, one on Moderate Resolution Interoperability (MRI).

All three of those are interrelated to a degree, Labahn said. “LSI-VC and CARD4L, Future Data Architectures and MRI, are really locked together,” he added. “The idea is, if you’re talking about doing time-series work, say you’re using Data Cube architectures to work back through time, it shouldn’t matter what data you use or which sensor it comes from. You put this CARD4L data into the architecture, and you increase the density of observations through time. That’s FDA. That’s CARD4L. And that is MRI … the interoperability piece all mashed together in one vision.”

While the push now for interoperability really centers on linking data from Landsat and Sentinel-2, Labahn said the goal is to bring other providers and their data into the mix. It could be missions like India’s Resourcesat satellites. There are other optical missions and radar technology that could participate as well. As the CEOS work continues, many of those platforms are being encouraged to consider becoming CARD4L compliant. Many are already responding, Labahn said.

“They could all sit within Amazon’s S3 (Simple Storage Service) Cloud environment, Google’s Earth Engine environment, or some other Data Cube environment,” he said. “This stuff is all stackable, they’re measurements, and you can run your science algorithms against them. That’s the ultimate goal. The data providers should get to CARD4L compliant, because if they are CARD4L compliant, that data will stack through time, and people can make use of it, and it’s got your best shot at interoperability.”

How soon that all happens is difficult to say, but the day is coming, Labahn reiterated. And when it does, he added, Landsat and its work on Global ARD will have played a major part in leading the way.