Insights into the eruptions of Steamboat Geyser

The tallest active geyser in the world has been erupting at a record pace since March 2018. Why are eruptions so energetic, what influences the intervals between eruptions, and why did Steamboat reactivate in the first place?

Yellowstone Caldera Chronicles is a weekly column written by scientists and collaborators of the Yellowstone Volcano Observatory. This week's contribution is from Mara H. Reed, former graduate student at the University of California, Berkeley.

Steamboat Geyser, located in Norris Geyser Basin, had 128 major eruptions between March 2018 and the end of 2020. This may not seem very impressive at first—Old Faithful Geyser can erupt that many times in just under 9 days—but for Steamboat, the true behemoth of geysers, it’s an incredible feat. Steamboat’s eruptions can send water 116 m (380 ft) into the air. The eruption intervals, or the periods between eruption starts, can be as short as 3 days or as long as 50 years. During all of 1985–2017, Steamboat erupted just 15 times.

Based on historical records, Steamboat alternates between dormancy (few major eruptions) and active phases (many eruptions with intervals of days to weeks) like the one it is experiencing now. Two prior active phases occurred in the 1960s and 1980s. The current active phase is unique because of how well it is being monitored. Eruption signals are recorded at temperature loggers in runoff channels, nearby seismometers, and a USGS streamgage. There is even a database of Steamboat eruption times and visual observations compiled by geyser enthusiasts.

These incredible datasets and the spurt of eruptions motivated a team of geoscientists to study the geyser and why it might be experiencing renewed activity. Their work was published recently in Proceedings of the National Academy of Sciences. The team found that the extreme height of Steamboat eruptions is probably due to the depth of the “bubble trap” (the shallow cavity or structure that directly supplies water to eruptions). Geysers with deep bubble traps have taller eruptions because water is stored deeper than at other geysers, and hence more energy is available to power the eruptions.

Eruption volumes were calculated to be 134–538 m3 (4730–19,000 ft3) for 29 eruptions that occurred during the low-wind and rain-free conditions needed to obtain good estimates. For comparison, 250 m3 (8830 ft3) is 1/10th the volume of an Olympic-sized swimming pool. The volume of an Old Faithful eruption is typically no greater than a comparatively paltry 30 m3 (1060 ft3). Unexpectedly, the volume of water erupted did not correlate with the interval before or after the eruption as it does at some other geysers, like Old Faithful.

Several earth processes are known to affect geyser eruption intervals, including earthquakes, weather conditions, and the availability of water. At Steamboat, there has been a slight seasonal effect, with longer intervals in the winter and shorter intervals in the summer—possibly due to pressure changes in the subsurface that are associated with groundwater recharge.

Now onto the big question: why did Steamboat kick off an active phase in 2018? Precipitation (rain/snowfall) does not seem to be the cause. Streamflow can be used as a rough proxy for regional precipitation, and highly active years for Steamboat do not correlate with abnormally low or high average annual discharge in the Yellowstone River during 1960–2019. Earthquakes probably also had no role in Steamboat’s reactivation. Seismic swarms occurred west of Norris Geyser Basin in summer 2017 and February 2018, but none of the earthquakes shook the ground hard enough to affect geysers.

What about the recent suggestion that the latest Steamboat active phase could be related to ground deformation at Norris Geyser Basin?  From 2016–2018, the geyser basin experienced uplift at an average rate of just over 2 cm/yr (1 in/yr). If that uplift was related to hot gasses rising to the surface, we might expect to see a slight temperature increase in the Norris hydrothermal system. Indeed, MODIS satellite data showed a slight correlation with deformation: there was a 0.8 °C temperature increase in radiated heat from the geyser basin that started in 2013 and leveled out in 2017–2018, just before Steamboat’s reactivation. However, the chemistry of water samples taken from Cistern Spring (connected to Steamboat) used to infer the temperature of the geothermal reservoir did not show significant changes over the same time period. No other geysers in Norris Geyser Basin reactivated during the uplift with the exception of Echinus Geyser’s brief active phase in late 2017, nor did chloride or sulfate concentrations, which might indicate an input of heat or gasses, increase in water exiting the geyser basin.

So where does this leave us? Unfortunately, we don’t have firm answers. But scientific research is all about asking questions, finding answers, and more often than not finding more questions! We are not yet sure why Steamboat reactivated. One as-yet untested possibility is that dormant-active transitions in geysers might be caused by changing rates of silica precipitation and dissolution in geyser plumbing systems. More work is needed to explore this idea.

For those lucky enough to have witnessed a Steamboat eruption, it is an unforgettable experience. The heart-stopping “point of no return” when the eruption begins to shoot water higher and higher until you have to crane your neck to see the top. The roar of the steam phase drowning out all other sounds. Sharing joy with the other onlookers, including both just-arrived folks with impeccable timing and hardcore geyser gazers who had been waiting for days. Geysers fascinate Yellowstone visitors and researchers alike, and we continue to marvel at Steamboat’s impressive eruptions. Hopefully more years of activity lie ahead for us to enjoy! 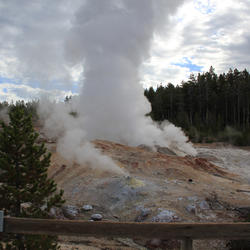 This geyser is located at the eastern edge of Norris’ Back Basin. It rarely has major eruptions, but when they occur they are powerful. In these events, columns of hot water reach heights up to 100 meters followed by a raucous steam phase that can last for over a day, loudly discharging steam nearly 200 meters into the atmosphere.

This geyser is located at the eastern edge of Norris’ Back Basin. It rarely has major eruptions, but when they occur they are powerful. In these events, columns of hot water reach heights up to 100 meters followed by a raucous steam phase that can last for over a day, loudly discharging steam nearly 200 meters into the atmosphere.

Our search for eruption precursors focused on gas emissions at Steamboat Geyser. We made repeated measurements over time to look for sudden changes in...

The Steamboat Geyser Eruption of June 4, 2018: A personal perspective

Yellowstone Caldera Chronicles is a weekly column written by scientists and collaborators of the Yellowstone Volcano Observatory. This week's...

Steamboat geyser, in Norris Geyser Basin within Yellowstone National Park, is world famous for being the tallest active geyser in the world.

If there were an Olympic medal for hydrothermal systems, Norris Geyser Basin would bring home the gold.

A closer look at the 2017 Maple Creek earthquake swarm

In June of 2017, an earthquake swarm began beneath the western edge of Yellowstone National Park, just east of Hebgen Lake. This swarm proved to be...

Over the past several days, an earthquake swarm has been ongoing at Yellowstone. Before you read any more, keep in mind that swarms like this account...

A time when Old Faithful wasn’t so faithful

Old Faithful Geyser got its unique name in the 19th century because its eruptions were so regular and predictable. But during parts of the 13th and...

60 years since the 1959 M7.3 Hebgen Lake earthquake: its history and effects on the Yellowstone region

Yellowstone Caldera Chronicles is a weekly column written by scientists and collaborators of the Yellowstone Volcano Observatory. This week's...