Polar bears are found throughout the circumpolar Arctic and roam across miles of sea ice and land.  They prefer to eat blubber, especially from seals that are also found on the sea ice.  However, the sea ice habitat of polar bears is changing rapidly with substantial recent declines in the extent of sea ice in the Arctic.  These changes are leading polar bears to spend more time on land in some areas, which influences what they eat and potentially their future health.

Understanding the shifting diets of polar bears is important to inform questions about how these animals will be able to adapt to future changes if sea ice continues to decline.  As scientists and others track wild populations, the study of wild polar bear diets is leading to an unexpected benefit for another polar bear population: bears in zoos.

In a recent interview on Oregon Public Broadcasting, Dr. Karyn Rode, a Research Wildlife Biologist with the USGS Alaska Science Center, talks about her collaborative work with zoos to develop methods for better understanding wild bear populations, especially in terms of shifting diets.  Additionally, Dr. Rode was a co-author on a recent paper in the journal Zoo Biology that used information on diets of wild bears to inform the development of a new kibble diet for captive bears that is healthier and more consistent with wild bear diets.

When did you first consider working with polar bears in zoos to address questions about wild polar bears?

I was thinking about this from the beginning, when I first started studying polar bears largely because my previous work with grizzly bears and other large mammals paired controlled studies in captive environments with applications to wild populations.  When I started studying polar bears in 2006, there was not much research being done with polar bears in zoos that were applicable to wild populations.  Many of the questions I was working on related to bear health and feeding behavior which required better understanding polar bear physiology and developing new methods which could best be done with bears in zoos.

Have you had insights into wild polar bears that have come from your work with zoo bears, insights you didn’t expect?

We have generated data from studies of zoo bears that allow us to study wild bears in ways that we couldn't previously.  For example, we now can infer the behavior and energetic expenditure of polar bears based on activity sensors in collars.  We used bears in zoos to determine how to distinguish different behaviors that we could observe in zoo bears based on activity sensor data that can be obtained from collars, which we deploy on wild bears.  We can also more accurately estimate the diets of polar bears using hair and blood samples, including determining how energy dense their diets are - a factor that is important to maintaining body condition and reproduction.

The biggest surprise in our research has been the degree to which the nutritional requirements of polar bears has not changed from that of their closest ancestor, the grizzly bear.  Although polar bears are entirely carnivorous in their sea ice habitat, they have low protein requirements that match the more omnivorous brown bear.  Whereas brown bears achieve a balanced diet in the wild that meets their low protein requirements by consuming carbohydrates, such as berries and vegetation, polar bears achieve that same nutrition by eating large proportions of marine mammal blubber that keep their protein intake low.  That has been a shift in perspective on the feeding ecology and nutrition of polar bears from being thought of primarily as a carnivore to being more of a lipivore (fat-loving).  This has highlighted how important energy-dense marine blubber is to support polar bears as the largest bear species in the world.

Zoos are great places for people to see animals and learn all about them.  What kinds of questions do you hear from the public about polar bears when you are working at zoos?

In many cities where zoos occur, people don’t get the opportunity to see animals in the wild and know little about how we study them.  The application of collars for monitoring animal movement is novel to them.  In some of our research we have put collars on zoo bears to determine how we can use activity sensor data (like what a fitbit would provide) to determine what a bear is doing (i.e., swimming, walking or resting).  The public is interested in how those collars work and how we are able to find bears and apply them.

Additionally, most people we encounter in zoos want to better understand how polar bears are coping with sea ice loss and global warming.  They are trying to determine if what they see in the media reflects what we are learning and seeing in the field.  They appreciate the more nuanced explanation that we can provide from our research than they often see in the media.

For students interested in wildlife or biology careers, are zoos a good place to get started?

Yes. It is effectively how I started my career.  I initially conducted my Master's degree research at a captive grizzly bear research facility at Washington State University.  Getting a strong foundation in research methods, including collecting blood and sedating animals, helps set the stage to move into field work.  Studies in zoos can also provide a depth of understanding about species physiology that can then be applied in the field.

Polar bears are one of 4 marine mammal species managed by the U.S. Department of Interior. The USGS Alaska Science Center leads long–term research on polar bears to inform local, state, national and international policy makers regarding conservation of the species and its habitat. 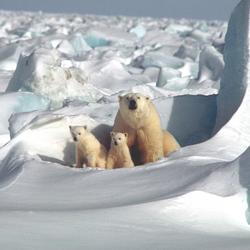 Polar bears (Ursus maritimus) are one of 4 marine mammal species managed by the U.S. Department of Interior. The USGS Alaska Science Center leads long–term research on polar bears to inform local, state, national and international policy makers regarding conservation of the species and its habitat. Our studies, ongoing since 1985, are focused on population dynamics, health and energetics...
Learn More