To help the U.S. Bureau of Land Management determine the long-term sustainability of the San Sebastian Marsh, and its critical role for the survival of the endangered desert pupfish (Cyprinodon macularius), the USGS is evaluating the potential interactions and relation between groundwater and surface water at the San Sebastian Marsh.

Maintaining habitat quality for the federally listed endangered desert pupfish (Cyprinodon macularius) in the San Sebastian Marsh (SSM) is a high priority under the U.S. Bureau of Land Management (BLM) Desert Renewable Energy Conservation Plan (U.S. Bureau of Land Managemet, 2014). In 2017, land managers and the U.S. Fish and Wildlife Service became alarmed about the long-term drought impacts on SSM. Salvaged pupfish were transported to holding facilities at a wildlife refuge at the Salton Sea until conditions improved at the SSM to return the fish. A more complete understanding of the water resources for the SSM is urgent and essential for planning and undertaking steps to enhance the ecological function of the SSM, especially in its role as critical wetland habitat.

The SSM has been designated an Area of Critical Environmental Concern and has been designated Critical Habitat for the desert pupfish (Cyprinodon macularius) and Yuma Ridgway’s Rail (Rallus longirostris yumanensis) (U.S. Bureau of Land Management, 2014).  Located in southern California, about 9 miles west of the Salton Sea in Imperial County, the SSM also attracts multiple species of desert bats, several of which the BLM California State Office has designated as Special Status Species and may furnish nesting habitat for two other threatened bird taxa:  southwestern willow flycatcher (Empidonax trailii extimus) and the least Bell’s vireo (Vireo bellii pusillus).

No detailed or extensive investigative or scientific hydrologic study has been done to assess the sources of the water that discharges to the SSM. Groundwater discharge and inflow from San Felipe Creek, and other washes originating in the local mountains to the west and south, create flow at the SSM. The flow dissipates as water infiltrates the streambed as it flows to the northeast, downstream past the SSM. Data are needed to better understand the source(s) of the water, the interaction of groundwater and surface water contributing to the SSM, and the relation between the San Felipe Creek and the SSM.

To help the BLM determine the long-term sustainability of the SSM, and its critical role for the survival of the endangered desert pupfish, the USGS is evaluating the potential interactions and relation between groundwater and surface water at the SSM. This will advance the scientific foundation for management of the SSM, its two contributing watersheds—Carrizo Wash and San Felipe Creek—and the three groundwater basins that potentially contribute water to the SSM.

The scope of this study includes installing two nested, multi-depth monitoring sites for collecting and processing groundwater-level and water-quality data, and interpreting the data to determine the influence and contribution of groundwater and surface water to the SSM. Also, surface water samples will be collected from washes and streams within the two watersheds that feed the SSM. An attempt to estimate fluxes of water between the surface water and groundwater will be made using temperature signals (a one-dimensional numerical modeling approach) and examining differences in hydraulic head at the nested, multi-depth monitoring sites.

The USGS expertise and scientific methods benefit the BLM managers, local landowners, and other private entities by providing data and information for them to manage wetlands, water resources, and watersheds efficiently and cost effectively 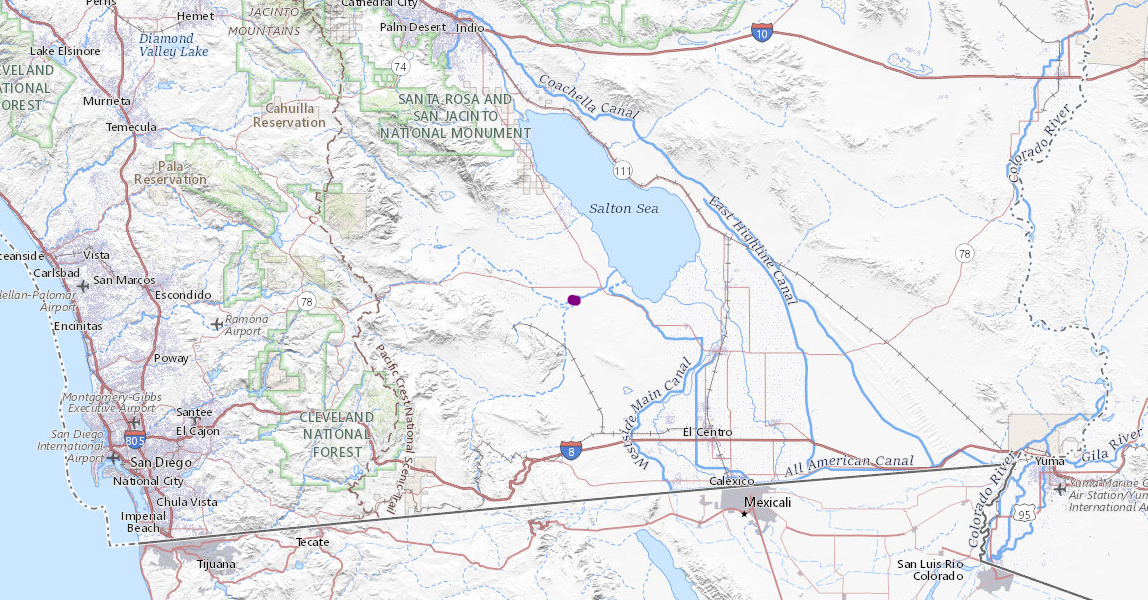