The Los Angeles Coastal Plain (LACP) covers about 580 square miles and is the largest coastal plain of semiarid southern California. The LACP is heavily developed with mostly residential, commercial, and industrial land uses that rely heavily on groundwater for water supply. In 2010, the LACP was home to about 14 percent of California’s population, or about 5.4 million residents. The LACP is also a major commercial and industrial hub with industries including manufacturing, aerospace, entertainment, and tourism.

There has been a heavy reliance on groundwater from the LACP for many years. An average of 305,000 acre-feet per year (acre-ft/yr) of groundwater was used annually from the LACP from 1971 to 2015. The need to replenish the groundwater basins within the LACP was recognized as far back as the 1930s, when spreading grounds were first used to replenish groundwater basins and store water underground during times of water surplus to meet demands in times of shortage. Seawater intrusion resulting from freshwater pumping was first observed in the 1940s. As a result, injection of imported water through wells at what is now the West Coast Basin Barrier Project began on an experimental basis in 1951. Managed aquifer recharge from the spreading grounds and barrier wells is now a substantial component of the LACP’s groundwater supply. The average annual recharge from water spreading from 1971 to 2015 was about 120,000 acre-ft/yr, and the average annual injection into the barrier wells was about 33,000 acre-ft/yr. Other inflows include areal recharge, underflow from San Gabriel and San Fernando Valleys, and onshore flow from the ocean. The average annual recharge from these sources was 100,000 acre-feet (acre-ft) from 1971 to 2015. Additionally, cross-boundary flow from Orange County into the western Orange County subareas of the LACP was simulated as 48,000 acre-ft from 1971 to 2015.

This study, conducted in cooperation with the Water Replenishment District of Southern California (WRD), involved an assessment of the historical and present status of groundwater resources in the LACP and the development of tools to better understand the groundwater system. These efforts were built upon results from previous studies and incorporate new information and developments in modeling capabilities to provide a more detailed analysis of the aquifer systems.

This study includes a comprehensive compilation of geologic and hydrologic data, development of a chronostratigraphic model that provides a detailed description of the LACP aquifer systems, characterization of the groundwater hydrology of the LACP, including a down-hole analysis of grain size using lithologic and geophysical logs, and development and application of the Los Angeles Coastal Plain Groundwater-flow Model (LACPGM) to simulate past groundwater conditions, estimate groundwater-budget components and flow paths, and approximate future groundwater conditions under different scenarios. 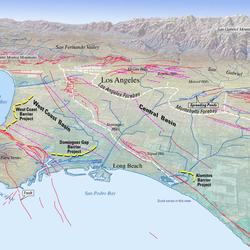 Using the new information, along with the recently acquired seismic reflection data, USGS scientists and co-workers have been able to develop a much more detailed understanding of the stratigraphy and structure of the Central and West Coast Basins.
By
California Water Science Center
link
December 4, 2018

Using the new information, along with the recently acquired seismic reflection data, USGS scientists and co-workers have been able to develop a much more detailed understanding of the stratigraphy and structure of the Central and West Coast Basins.
Learn More
link 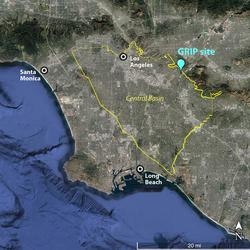 The Water Replenishment District of Southern California (WRD) is planning to construct an advanced water treatment facility and three supplemental injection wells in a recharge area in the coastal plain of Los Angeles County.
Learn More