As an apex predator and fiercely territorial invader, barred owls at high densities have the potential to affect a variety of native wildlife through competition, niche displacement, and predation. Such impacts may be especially problematic for conservation of the federally threatened northern spotted owl, whose populations have continued to decline despite widespread protection of old forest habitat for the owl and associated wildlife. We conduct research to address the implications of the barred owl range expansion to conservation of northern spotted owls and other native wildlife in the Pacific Northwest. We work closely with resource managers to provide information on the status and ecology of barred owls, their role in population declines of northern spotted owls, and effectiveness of management options.

Effects of Barred Owls on Population Demography of Spotted Owls

A clear understanding of how competition with newly established barred owls contributes to population declines of northern spotted owls is required to inform potential control, mitigation, and recovery strategies. In collaboration with US Fish & Wildlife Service we are using large-scale field experiments to determine whether removing barred owls from select areas can improve population trends of northern spotted owls. This research will provide a definitive answer to whether competition with barred owls is contributing to population declines of spotted owls, and if so, whether control of barred owl numbers is an ecologically practical and cost-effective management tool to consider in future conservation strategies for spotted owls. Please visit the USGS project website here.

Predator-prey Interactions of a Non-native Raptor

Little research exists on the overall impacts of the barred owl, a newly established apex predator in the Pacific Northwest, on other forest species, besides spotted owls, and food-web dynamics. This project takes advantage of the experimental design associated with an on-going barred owl removal experiment to evaluate the impact this novel avian predator is having on the food web in Pacific Northwest forests. Understanding the impact of barred owls on the food web is critical for spotted owls and other native species, particularly as barred owl densities reach carrying capacity in these forests.

Competitive Interactions and Resource Use

Understanding the competitive relationship between spotted owls and barred owls requires primary information on individual life-history traits, resource use, and population dynamics. This research investigates the distribution, habitat associations, diets, and demography of barred owls and spotted owls so that the potential mechanisms and consequences of interspecific competition can be identified and addressed within a management context.

Most information on occurrence and distribution of barred owls in the Pacific Northwest is limited to ancillary data from studies of spotted owls. Our research addresses this shortcoming by developing, testing, and implementing survey designs that allow researchers and land managers to monitor occurrence and distribution of barred owls with high confidence.

The USGS has been collecting and analyzing information about spotted owl genetics for decades. Management agencies use these and other genetic information to review the status of the northern spotted owl, and in combination with population estimates and habitat assessments, to consider management options for all three subspecies - California, northern, and Mexican - of spotted owl and their hybrids. 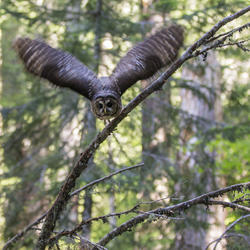 The data are included in 8 separate text files: 1) "Sample_coordinates.txt". The file contains sample identifiers along with geographic coordinates associated with each sample. Coordinates are specified as UTM Zone 10 values (WGS84). 2) "Sample_genotypes.txt". The file contains a sample identifier along with microsatellite genotypes associated with each sample. 3) "uniform_conductances.asc". An
By
Forest and Rangeland Ecosystem Science Center 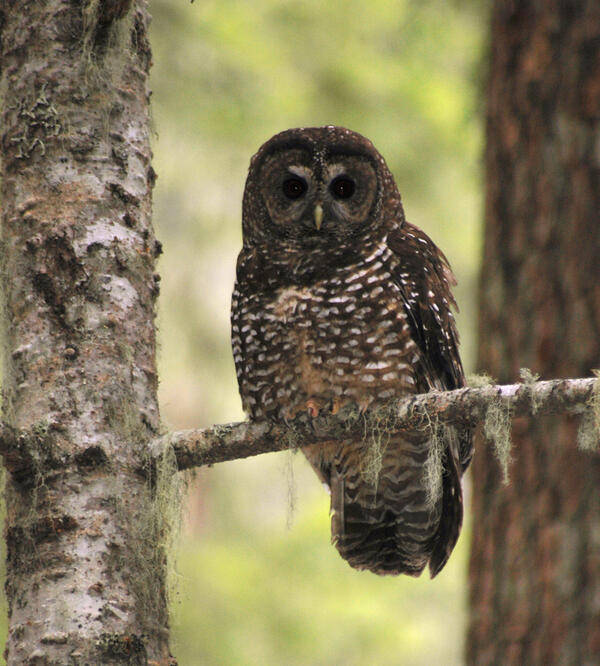 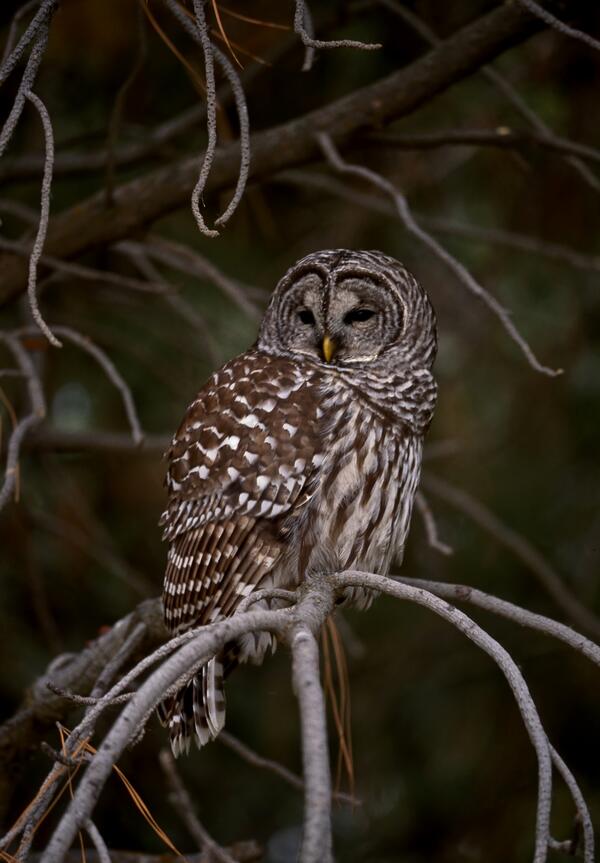 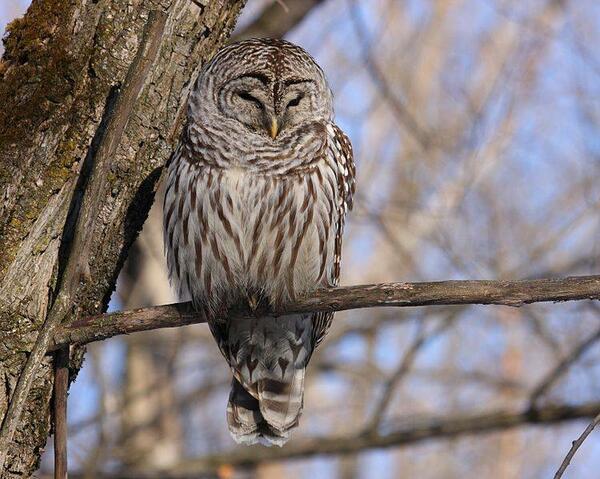 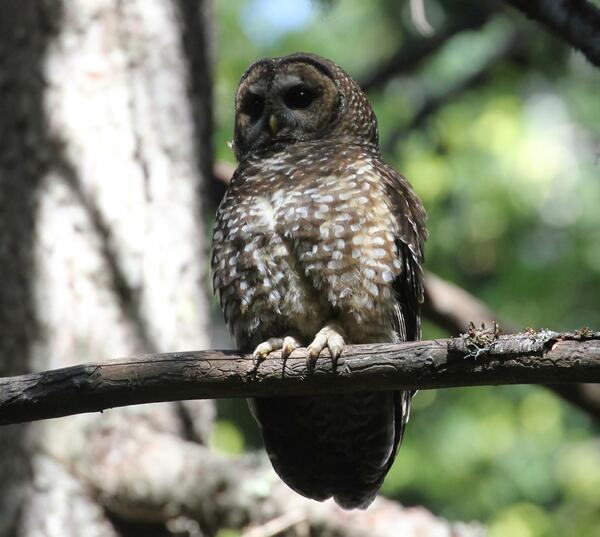 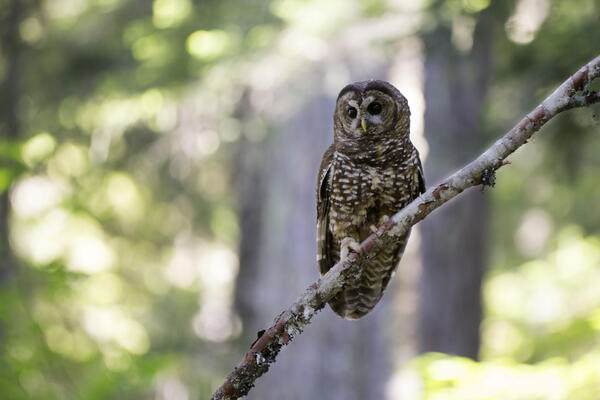 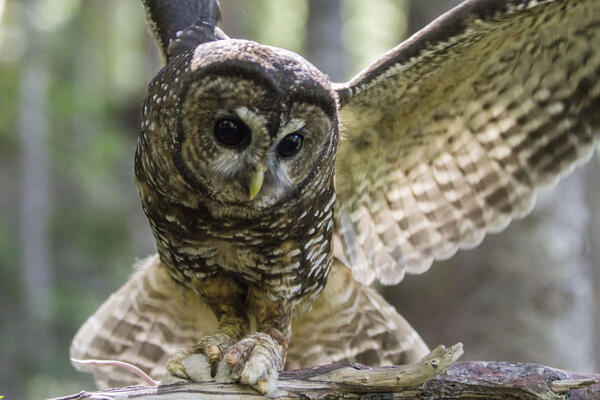 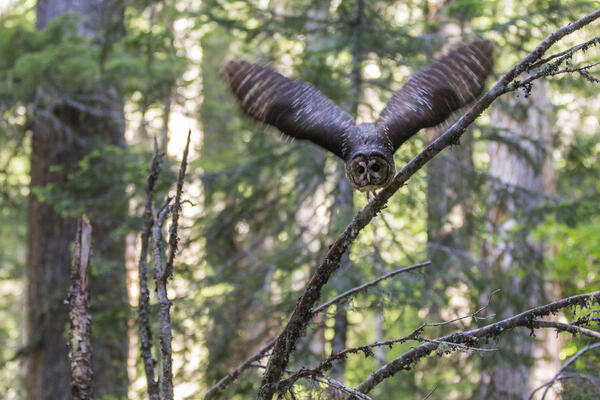 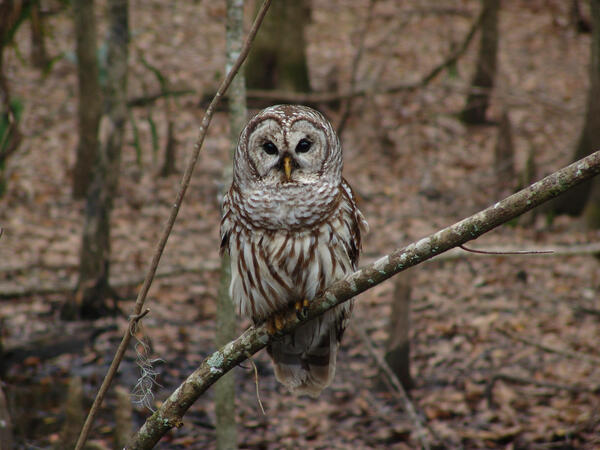 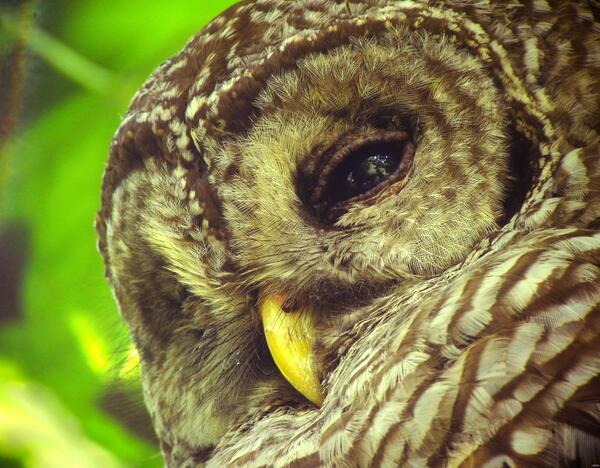 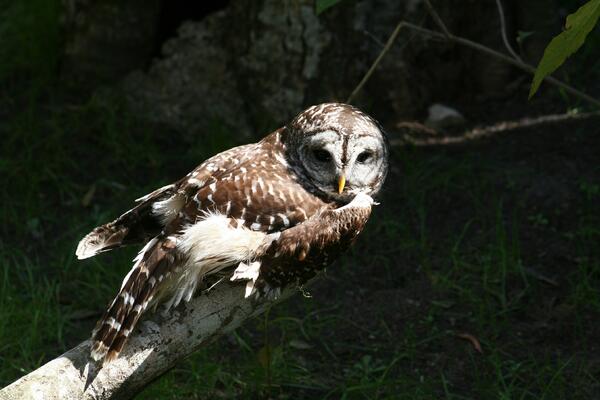 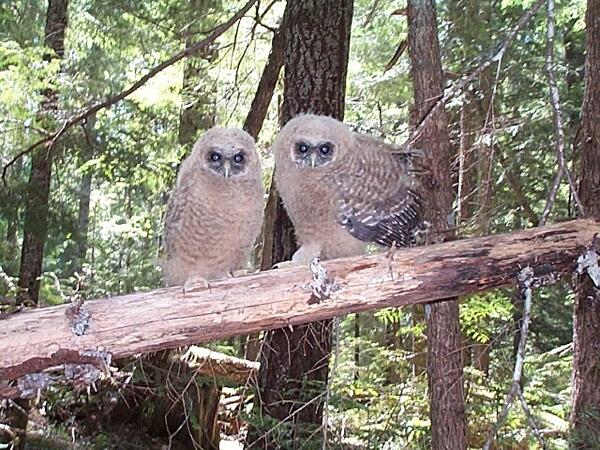 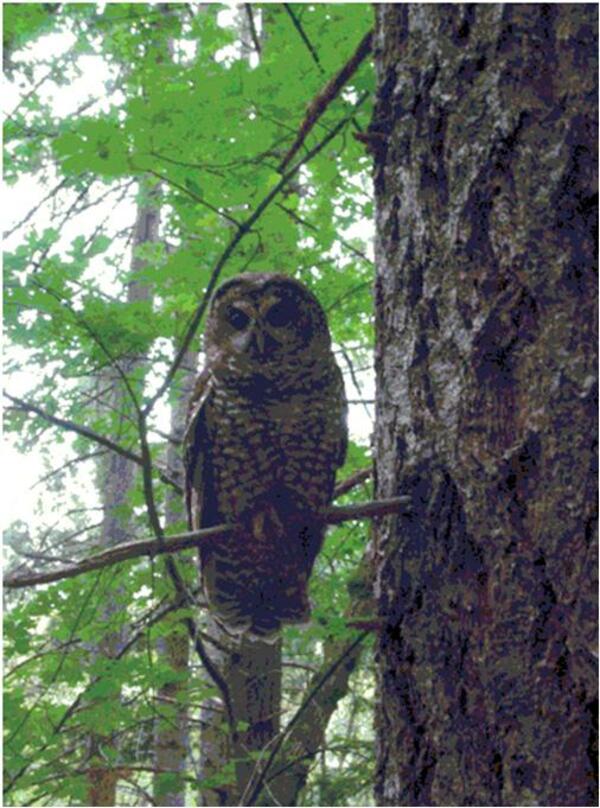 Exposure of nontarget wildlife to anticoagulant rodenticides (AR) is a global conservation concern typically centered around urban or agricultural areas. Recently, however, the illegal use of ARs in remote forests of California, USA, has exposed sensitive predators, including the federally threatened northern spotted owl (Strix occidentalis caurina). We used congeneric barred owls (S. varia) as a
By
Ecosystems, Forest and Rangeland Ecosystem Science Center
June 28, 2019

Coexistence of ecologically similar species can be maintained by partitioning along one or more niche axes. Three-dimensional structural complexity is central to facilitating resource partitioning between many forest species, but is underrepresented in field-based studies. We examined resource selection by sympatric northern spotted owls (Strix occidentalis caurina), a threatened species under the
By
Ecosystems, Forest and Rangeland Ecosystem Science Center
October 11, 2018

Barred owls (Strix varia) have reached high densities within the range of the northern spotted owl (S. occidentalis caurina) and are rapidly increasing in number within the range of the California spotted owl (S. o. occidentalis). Encroaching populations of barred owls pose a significant competitive threat to the viability of both spotted owl subspecies in California. In response, the Director of
By
Ecosystems, Forest and Rangeland Ecosystem Science Center
August 2, 2018

Variation in inbreeding rates across the range of Northern Spotted Owls (Strix occidentalis caurina): Insights from over 30 years of monitoring data

Inbreeding has been difficult to quantify in wild populations because of incomplete parentage information. We applied and extended a recently developed framework for addressing this problem to infer inbreeding rates in Northern Spotted Owls (Strix occidentalis caurina) across the Pacific Northwest, USA. Using pedigrees from 14,187 Northern Spotted Owls, we inferred inbreeding rates for 14 types of
By
Ecosystems, Forest and Rangeland Ecosystem Science Center
May 21, 2018

Genetic differentiation among Spotted Owl (Strix occidentalis) subspecies has been established in prior studies. These investigations also provided evidence for introgression and hybridization among taxa but were limited by a lack of samples from geographic regions where subspecies came into close contact. We analyzed new sets of samples from Northern Spotted Owls (NSO: S. o. caurina) and Californ
By
Ecosystems, Forest and Rangeland Ecosystem Science Center
June 15, 2017

There is increasing need for methods that integrate multiple data types into a single analytical framework as the spatial and temporal scale of ecological research expands. Current work on this topic primarily focuses on combining capture–recapture data from marked individuals with other data types into integrated population models. Yet, studies of species distributions and trends often rely on da
By
Ecosystems, Eastern Ecological Science Center, Patuxent Wildlife Research Center, Forest and Rangeland Ecosystem Science Center
April 13, 2017

Evidence indicates that competition with invasive barred owls (Strix varia) is causing rapid declines in populations of northern spotted owls (S. occidentalis caurina), and that the long-term persistence of spotted owls may be in question without additional management intervention. A pilot study in California showed that removal of barred owls in combination with habitat conservation may be able t
By
Ecosystems, Species Management Research Program, Forest and Rangeland Ecosystem Science Center

News Releases and plain language summaries of some of our products.

The Ecological Society of America put out a press release on a paper that investigated the relative importance of barred owl competition and habitat...

Over the past century barred owls have been expanding their range westward, encroaching into the old-forest habitat of their sister species, the...

Federal researchers used landscape genetics to evaluate the role that forest connectivity plays in determining genetic connectivity for the federally...

In a study led by the USGS, researchers developed a framework to infer inbreeding rates of Northern Spotted Owls when incomplete parentage information...

Authors from the U.S. Forest Service and the USGS wrote a book chapter outlining how northern spotted owls shaped the Northwest Forest Plan.

Evidence suggests that the long-term persistence of northern spotted owls may be in question without additional management intervention.

CORVALLIS, Ore. – Northern spotted owl populations are declining in all parts of their range in the Pacific Northwest, according to research published...
Read Article
link
February 24, 2014

An increase in the barred owl population is contributing to the decline of threatened Northern spotted owls, according to models developed by U.S...

These are our partners.

The Oregon Department of Forestry