Since the mid-1990s, several species of non-native, giant constrictor snakes, such as Burmese pythons and boa constrictors, have surfaced in localities throughout southern Florida. Several are known or suspected to be breeding and appear to be spreading northward. Increasingly, media and other reports of sightings or encounters with these animals have emphasized the dangers they could impose on native species, ecosystems, pets, and people. The USGS Fort Collins Science Center (FORT), government resource management agencies, the University of Florida, Davidson College (NC), and The Nature Conservancy have been collaborating on research and intervention methods to cope with an urgent need to understand and control these large, widespread predators.

Fort Collins Science Center (FORT) scientists are intimately familiar with snake invasion research and prevention. For more than 20 years, they have been involved with the invasive brown treesnake (Boiga irregularis) on the island of Guam. This snake has caused the extirpation of 10 native species of songbirds and several species of lizards and bats on the island. Lost power sales due to snake-caused power outages can total more than $1 million per year, and this figure does not include economic damages due to impacts on business and tourism, poultry production, loss of pets, and bites to humans. Because eradication on Guam is largely infeasible given available control tools, the brown treesnake is now the subject of efforts to prevent its spread to, and colonization of, other Pacific islands including Hawaii.

At the request of the National Park Service (NPS) and the U.S. Fish and Wildlife Service (FWS), FORT scientists Robert Reed and his team are investigating the ecology and control of giant constrictors in Florida. These snakes constitute an exceptional threat to the integrity of native ecosystems in Florida and similar environments in which they now thrive.

The best-documented case of an invasive constrictor snake in Florida is that of the Burmese python (Python molurus bivittatus). A population of Burmese pythons expanding from Everglades National Park is conservatively estimated to number in the thousands1. Boa constrictors (Boa constrictor) are known to be established in south Florida, and recent evidence suggests that a reproducing population of northern African pythons (Python sebae) exists there as well. Free-ranging individuals of several additional species of non-native giant constrictors (which include anacondas, pythons, and boas) are regularly discovered in various parts of the United States, including a 95-pound boa constrictor recently captured on No Name Key in the Florida Keys after being on the loose for several years, the shed skin from a large Burmese python in extreme southern California, and a yellow anaconda (Eunectes notaeus) from Big Cypress National Preserve in Florida. Other feral species of giant constrictor snakes also have been sighted or caught in the wild in Florida (see box).

Giant constrictors have the potential to appreciably alter the natural communities of life in south Florida and beyond, possibly including large portions of the continental United States and most insular states and territories.

The Problem with Large Predator Snakes

Generalist predators, such as all of the giant snakes, are considered to be a greater threat as invaders: no matter where they find themselves, they are likely to locate suitable prey. They are also more likely to cause the extinction of at-risk species, since they can thrive on alternate prey as they drive the vulnerable prey to extinction.

Giant constrictors share a number of additional traits that either increase the severity of likely ecological impacts or confound control and eradication efforts. Among other things, these snake species

Again at the request of the FWS and NPS, USGS investigators Bob Reed and (now retired emeritus) USGS scientist Gordon Rodda conducted a risk assessment of 9 giant constrictor species (See Risk Assessment Species below) to evaluate the ecological, economic, and human-welfare risks associated with invasive giant constrictors in the United States. In addition to the 4 species described below (Burmese python, boa constrictor, northern African python, yellow anaconda), the assessment includes 5 other species: reticulated python (Broghammerus/Python reticulatus), green anaconda (Eunectes murinus), Beni anaconda (Eunectes beniensis), DeSchauensee’s anaconda (Eunectes deschauenseei), and southern African python (Python natalensis). The assessment contrasts the projected biological and related impacts of potential establishment in the United States by any of the 9 species against the conditions that would normally persist in the absence of such colonization. (A colonization is usually considered “established” when there is physical evidence that a species’ entire life cycle is being completed in its new environment, including reproduction and growth to maturation). Drs. Reed and Rodda also compiled biological information pertinent to the potential social and economic impacts.2 (They do not examine potential regulatory or management actions; these are the province of other government entities.) These data constitute an important source of information that policymakers and managers can use as they consider possible management and regulatory actions.

To assist land managers from several agencies in Florida working on the issue of invasive snakes, FORT scientists are also researching and evaluating control methods for invasive snakes, such as traps. This work includes ecological research required for effective implementation of these methods. Trap trials are being conducted on Key Largo and the Florida mainland.

Pythons are particularly worrisome in vulnerable habitats such as Key Largo, the only place in the world where the federally endangered Key Largo woodrat (Neotoma floridana smalli) and Key Largo cotton mouse (Peromyscus gossypinus allapaticola) are found. In 2007, several of the endangered woodrats were found in the stomach contents of Burmese pythons. The U.S. Fish and Wildlife Service requested help in keeping more pythons, which are powerful swimmers, from reaching and colonizing Key Largo. Concerted efforts led by Drs. Reed and Rodda, Dr. Ron Rozar, and Scott Goetz have been underway since 2008, when the USGS placed 60 traps throughout the Crocodile Lake National Wildlife Refuge and the Dagny Johnson Key Largo Hammock Botanical State Park. Both areas are on the undeveloped north end of the island. The goal of this effort is to intercept and eradicate snakes as they arrive on Key Largo, as well as to prevent colonization of the Lower Keys. Each trap is checked daily. In September 2009, a Burmese python was captured in one of the traps, and several pythons have been found on the developed part of the island. The traps will continue to be used in conjunction with a mainland trap trial (described below). Meanwhile, vigorous education and outreach efforts (see below) are being employed throughout Key Largo to build public awareness and capitalize on opportunities to report and remove observed snakes.

FORT scientists also are conducting trap trials on the mainland of Florida. Sixty traps have been set in areas known to support high densities of Burmese pythons, primarily on land owned by the South Florida Water Management District. Investigators are testing whether the traps work, which entrance designs are superior, and which sites are best for trapping. Research partners include the University of Florida, USGS Southeast Ecological Science Center (Davie Field Station), and National Park Service. This effort is largely supported by the USGS South Florida Information Access (SOFIA) program (formerly the USGS Greater Everglades Priority Ecosystem Science Program).

As a team, the research partners are also conducting ecological studies on pythons to better understand their biological requirements and behaviors in their new environment. Fort Collins-based USGS scientists are advising on experimental design and helping agencies with how to use the research results to inform management decisions.

Through cross-agency cooperation and working with private businesses and organizations, FORT scientists and their partners are helping to train people who cover a lot of ground during the course of their workday. Delivery company drivers, meter readers, firefighters and law enforcement officers, and other government and private personnel are learning how to recognize and report these snakes to appropriate agencies. In addition, agency/responder personnel learn how to safely capture and handle these large snakes. Cooperators such as the National Park Service and The Nature Conservancy are coordinating these activities, while USGS provides expert onsite trainers (Dr. Rozar and others) and consults on rapid-response efforts. Broadcast and print news media are also communicating the problem and the ongoing work to stem the snakes’ spread. The Florida Fish and Wildlife Conservation Commission sponsors free "Amnesty Days" at zoos around the state for people to turn in unwanted nonnative pets, such as snakes that have grown too large to care for, rather than releasing them into the wild. Training continues on a regular basis, and several television science programs have filmed the USGS invasive snake work.

Florida is not the only site in the continental United States threatened by invasive snakes. In California, at least four populations of three different species of eastern watersnakes (genus Nerodia) (see also http://www.californiaherps.com/snakes/pages/n.fasciata.html) are established, most likely originating with releases from the pet trade. As a generalist predator, water snakes, like the constrictors, represent a potential threat to small prey species of conservation concern, and may compete with native endangered species such as the giant gartersnake (Thamnophis gigas). They pose no known risk to humans, although they bite readily when handled. FORT scientists are helping Federal and State partners to assess the scale of this problem and attempt control efforts, including a trial eradication program in southern California led by Dr. Reed.

USGS research on snake ecology, control, and containment underway in Guam, Florida, and California will increase the likelihood of developing effective, targeted strategies—including prevention and control tools, rapid-response teams, and ecological forecasting—for land and resource managers as well as policymakers as they work to conserve U.S. ecosystems and the unique, native species they support.

2 The published report of the full risk assessment, including methods, species accounts, a synopsis of eradication tools, and findings, is available at https://pubs.er.usgs.gov/publication/ofr20091202 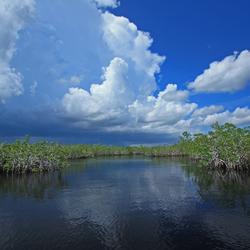 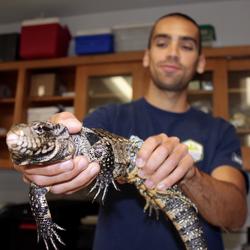 This project involves ongoing development of tools for the detection and capture of invasive reptiles in Florida, with an emphasis on Burmese pythons (Python bivittatus) and Black and white tegu lizards (Salvator merianae). The goals are to reduce the risk of reptile invasions in high-value resources such as Everglades National Park and the Florida Keys, to access early detection methods of new...
Learn More
link 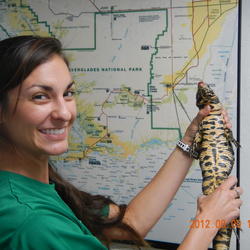 Invasive reptiles like the Burmese python (Python bivittatus) and Black-and-White Tegu Lizard (Tupinambis merianae) are exerting tremendous harm on Everglades ecosystems, but these problematic species present an excellent opportunity to engage the next generation in science. Since entering into an agreement with Everglades National Park in late 2013, the Invasive Species Science Branch of the U.S...
By
Ecosystems, Biological Threats and Invasive Species Research Program, Fort Collins Science Center
link
June 25, 2016

Invasive reptiles like the Burmese python (Python bivittatus) and Black-and-White Tegu Lizard (Tupinambis merianae) are exerting tremendous harm on Everglades ecosystems, but these problematic species present an excellent opportunity to engage the next generation in science. Since entering into an agreement with Everglades National Park in late 2013, the Invasive Species Science Branch of the U.S...
Learn More
link
July 28, 2021