Portions of New England are dealing with the consequences of drought from a warm and dry spring, and the conditions are persisting or worsening as summer begins.

Connecticut, Massachusetts, and Rhode Island had their 35th, 28th, and 18th driest spring, respectively, in 128 years, according to the National Centers for Environmental Information. All three states received below average precipitation levels over the past three months, with Maine and New Hampshire accumulating near average levels of rain during the same time period.

The U.S. Drought Monitor, a partnership between the National Drought Mitigation Center at the University of Nebraska-Lincoln, the United States Department of Agriculture, and the National Oceanic and Atmospheric Administration, categorizes the landscape as: no drought, abnormally dry, moderate drought, severe drought, extreme drought, and exceptional drought.

The monitor has designated central and eastern Connecticut and Massachusetts, and all of Rhode Island, as experiencing abnormally dry to moderate drought.

According to the U.S. Drought Monitor, Northwest Maine has been in an abnormally dry to moderate drought state since last year. While last spring was dry throughout Maine, rainfall in mid-summer ended the dry soil conditions and low groundwater for most of the state. However, Maine’s western mountains prevented last summer’s precipitation from reaching the northwest portion of the Pine Tree State.

This past spring, a slightly less than average amount of rain extended the drought over the western mountains and to the seaboard in the central part of the state. Currently, a majority of the Maine coastline and southeastern New Hampshire is listed as having a moderate drought, with the northwestern portion of New Hampshire being abnormally dry. In June, drought conditions extended into Southern Vermont and abnormally dry conditions have expanded northward in the past week.

Despite recent rainfall in parts of New England, groundwater levels and streamflow still remain below average. To see if your county is currently experiencing a drought, check out the Northeast map presented by the U.S. Drought Monitor, which is updated every Thursday. Those living in the dry areas of New England can mitigate drought conditions by practicing water conservation practices, such as minimizing overall water use, limiting outdoor watering, and fixing any indoor leaks. 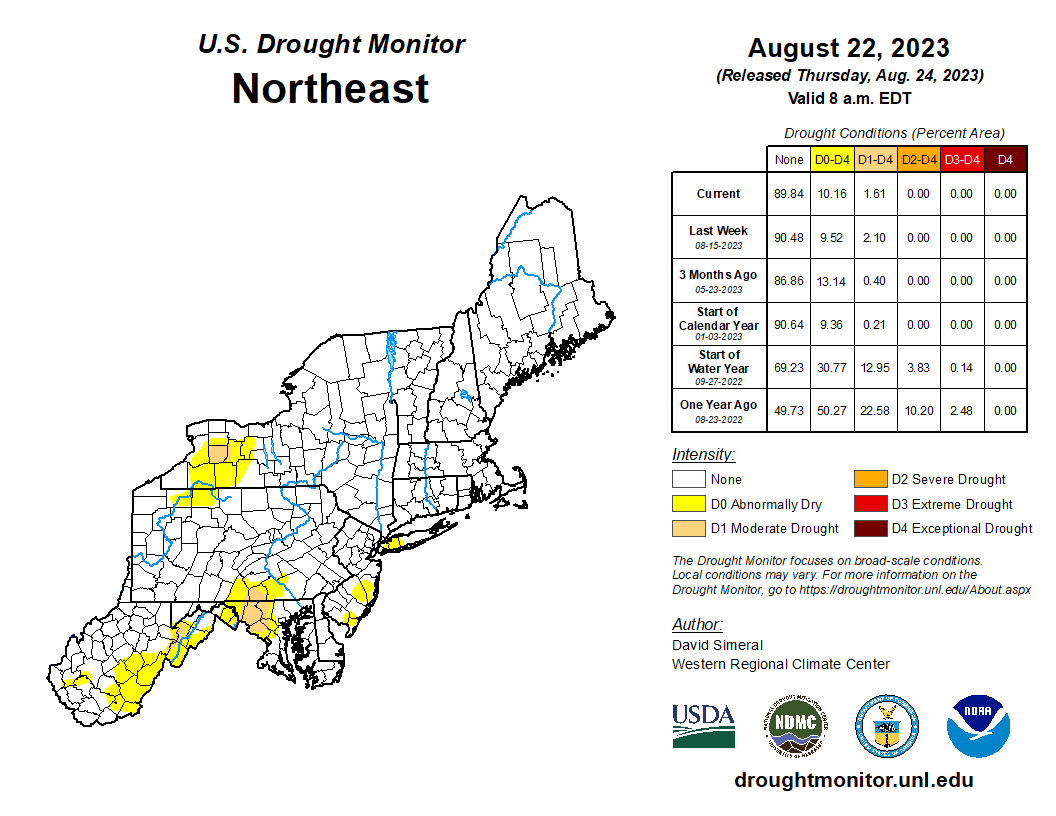 Map of Drought Areas in the Northeastern United States

A map displaying drought levels in the northeastern United States.