Rhode Island, Connecticut, and Massachusetts had the second, tenth, and 16th driest Julys, respectively, since 1895, according to the National Centers for Environmental Information.

Editor’s Note: This article was updated on September 29 to reflect current drought conditions.

The majority of New England continues to experience drought as we enter into fall. The drought began in the spring and intensified across the region this summer. Rhode Island, Connecticut, and Massachusetts had the second, tenth, and 16th driest Julys, respectively, since 1895, according to the National Centers for Environmental Information. These low precipitation numbers intensified drought in these states in August, while the rest of New England also saw an expanse of dry conditions as a result of below-normal precipitation and above-normal temperatures.

As of September 29, provisional streamflow data collected by USGS have recorded the lowest, or tied the lowest, average 7-day low flow at 26 stations with at least 10 years of data since July 1. Most of these records and tied average 7-day low flows occurred in mid-August and took place in southern New England, according to this provisional data available on USGS WaterWatch.

This summer, the drought reached its peak in mid-to-late August when all of Rhode Island, central Massachusetts, and eastern Connecticut were experiencing “extreme drought,” based on designations made by the U.S. Drought Monitor. The U.S. Drought Monitor is a partnership between the National Drought Mitigation Center at the University of Nebraska-Lincoln, the United States Department of Agriculture, and the National Oceanic and Atmospheric Administration. They categorize the landscape as: no drought, abnormally dry, moderate drought, severe drought, extreme drought, and exceptional drought.

Areas experiencing “extreme drought” are subject to agricultural stress, crop loss, and limited water supplies. Federal officials declared a “drought-related disaster” in Rhode Island on August 23 when the entire state was in “extreme drought,”, allowing agricultural and dairy farmers who lost production during the drought to recoup some financial loss.

At the drought’s peak, the other areas of New England were in various stages of drought. Southeastern Maine and New Hampshire, western Massachusetts and Cape Cod, and the remainder of Connecticut were in a “severe drought.” While central portions of Maine, Vermont, and New Hampshire experienced “moderate drought,” with more northern sections characterized as “abnormally dry.”

As of September 29, the Boston area and northeastern Massachusetts are the only parts of New England still experiencing “extreme drought,” with western and southern Connecticut and some of Massachusetts experiencing “severe drought.” The remainder of New England remains in “moderate drought” or as “abnormally dry,” with the exception of northern Maine and New Hampshire and northwestern Vermont which are seeing normal water levels and are not in a drought.

Rainfall in September has marginally improved drought conditions and boosted streamflows. However, the entire New England region requires a recharge event(s), where sustained rainfall over longer periods of time can saturate the soils and infiltrate into the aquifer, to resolve drought conditions.

The public can mitigate the effects of the drought by implementing water conservation practices, such as: restricting lawn irrigation and plant watering, fixing plumbing leaks, and running faucets for only as long as is necessary.

To learn more about the drought in your area and how your state is managing its water resources, please visit The New England Water Science Center Drought Information Page. 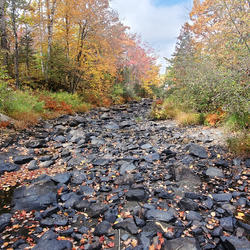 Droughts are one of the most expensive and damaging hydrologic hazards in the United States. They are generally slow in developing, frequently occur over a long period of time, and can affect large areas and populations.
By
New England Water Science Center
link
July 24, 2020

Droughts are one of the most expensive and damaging hydrologic hazards in the United States. They are generally slow in developing, frequently occur over a long period of time, and can affect large areas and populations.
Learn More