In 1959, a solid-fill railroad causeway was constructed across the middle of the Great Salt Lake. The construction of the causeway divided the lake into two parts; the north (Gunnison Bay) and the south (Gilbert Bay). By 2013, water flowed from one side to the other through only two culverts near the center of the causeway. In December 2013, concern about the structural integrity of the culverts resulted in their removal. After about three years of separation, a new bridge was completed near the middle of the causeway and the channel opened December 1, 2016. This new connection created a unique opportunity to study the re-formation of the deep brine layer in Gilbert Bay. 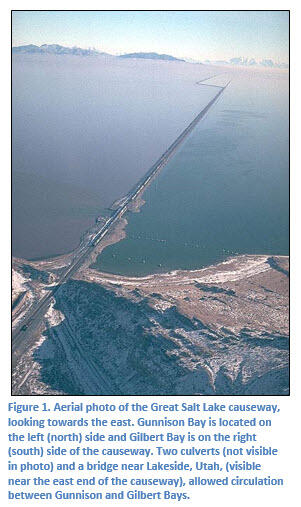 In 1959, a solid-fill railroad causeway was constructed across the middle of the Great Salt Lake (GSL). The causeway divides the lake into two parts: the north part (Gunnison Bay), which receives little freshwater inflow, and the south part (Gilbert Bay), which receives almost all the inflow (fig. 1). Historically, water from the north and south parts of the lake were able to circulate through the causeway via a small bridge near Lakeside, Utah, and two culverts near the middle of the causeway.  Because circulation through these features was not enough to completely mix the lake, and because the south part of the lake receives almost all freshwater inflows, the salinity of Gunnison Bay is always greater than the salinity of Gilbert Bay. Due to its lower salinity, Gilbert Bay supports an ecosystem rich with brine shrimp and brine flies that attract millions of migratory birds and waterfowl as they travel the Central Flyway.

Water from Gunnison Bay that was able to flow into Gilbert Bay via the culverts and Lakeside bridge formed a deep brine layer (DBL) near the bottom of the water column (fig. 2). Due to its greater density, the DBL did not readily mix with relatively shallow, and less dense water in Gilbert Bay (known as the upper brine layer (UBL)). In the absence of mixing, the DBL developed geochemical characteristics that were distinct from the UBL, including relatively low pH, high specific conductivity, and zero dissolved oxygen. The geochemical environment in the DBL favored the conversion of inorganic mercury to toxic methyl mercury, which is known to bio-magnify (i.e., increase in biological tissue as it transfers up trophic levels) (Naftz and others, 2008; Jones and Wurtsbaugh, 2014; Johnson and others, 2015). Elevated concentrations of methyl mercury in the DBL may have contributed to elevated levels of mercury in ducks at GSL. In 2005, the State of Utah issued consumption advisories for Common Goldeneye, Cinnamon Teal, and Northern Shoveler ducks from GSL because of elevated mercury levels found in their tissue (http://waterfowladvisories.utah.gov/). 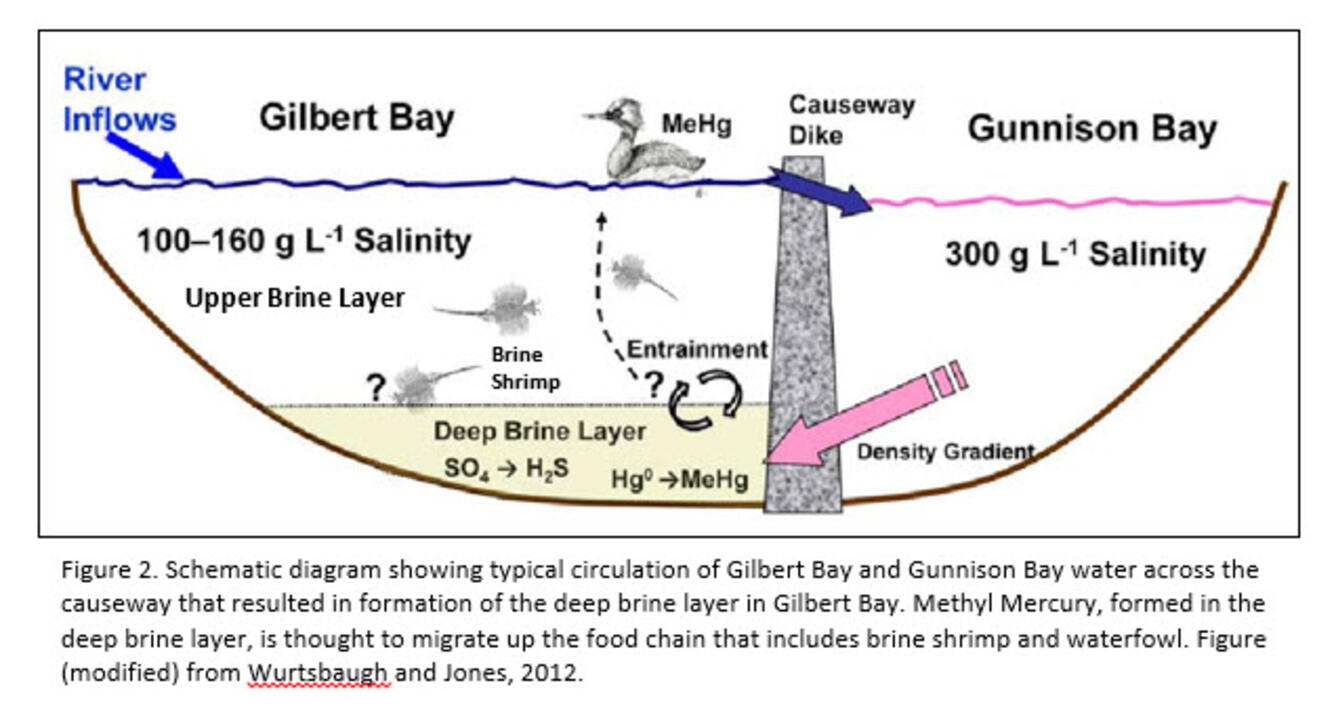 Due to concern about their structural integrity, the culverts that allowed Gunnison Bay water to enter Gilbert Bay were removed by December 2013. Around this time, lake levels reached a point where Gunnison Bay water was unable to travel through the bridge near Lakeside. Cut off from its source water, the deep brine layer in Gilbert Bay dissipated by June 2014. With the loss of the deep brine layer, methyl mercury levels near the lake bottom dropped dramatically, to levels similar to those measured in the upper brine layer (Valdez and Johnson, in process). 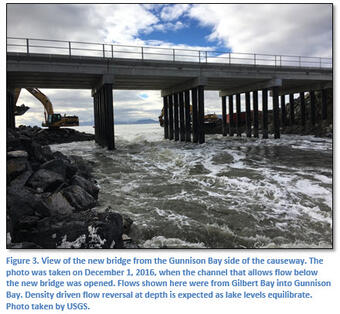 To restore circulation between Gunnison Bay and Gilbert Bay, a new bridge was completed on the causeway on December 1, 2016. The closure of the east and west culverts and the opening of the new bridge presented a unique opportunity to study the deep brine layer dynamics and its impact on biological and geochemical processes in Gilbert Bay.

Johnson, W.P. and others, 2015, Total- and methyl-mercury concentrations and methylation rates across the freshwater to hypersaline continuum of the Great Salt Lake, Utah, USA, Science of the Total Environment, v. 511, pp. 489-500.

Wurtsbaugh, Wayne A. and Jones, Erin F., "The Great Salt Lake’s Deep Brine Layer and Its Importance for Mercury Bioaccumulation