Electronics for controlling the moving arm

in the open pressure housing

The Coastal and Estuarine Dynamics Project primarily uses off-the-shelf instrumentation and sensors to collect observations.  Coastal and Estuarine Dynamics team designs and implements novel configurations for logging of data from sensors, and for deployment of these instruments in a wide range of estuarine, coastal, and ocean environments. Project staff continually evaluates instrument and sensor performance.  Some examples of recent engineering efforts are listed below. 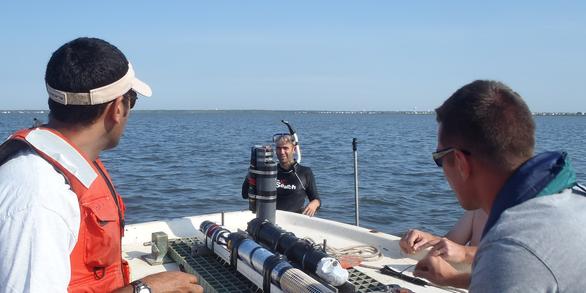 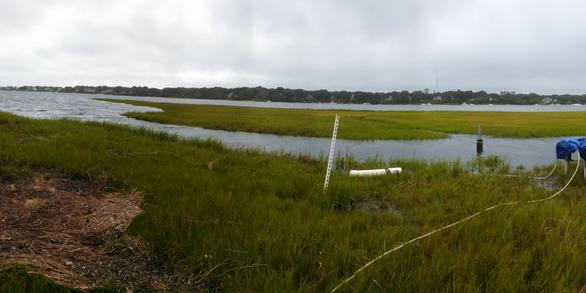 Oceanographic time-series measurements made by the USGS between 1975 and the present as part of research programs. The data were collected to address specific research questions using stationary platforms with sensors near the seafloor.

We often use sonars to measure seafloor bedforms and how they change in response to storms.  In order to accurately quantify the size of bedforms, the response of the sonars must be understood.  We assessed the sonars we use by collecting data in a test tank using targets of known shapes and sizes (https://soundwaves.usgs.gov/2010/03/research2.html)

Software to convert the raw data to a standardized form for release and evaluate data quality has been developed for each instrument deployed.  After review, all observations are released in the U.S. Geological Survey Oceanographic Time Series Measurement Database (Montgomery et al, 2016).

A variety of platforms have been developed and constructed for deployment of instruments near the sea floor.  Recent developments include a boundary layer profiler and a sled for bottom stress measurements.

A profiling arm was added to a tripod to move sensors up and down through the benthic boundary layer.  This instrument system collected repeated optical and acoustic profiles in the 2 m above the seabed. A unique feature of this system is that the same sensors make the observations in the profile, eliminating uncertainty caused by calibration of multiple sensors.  A linux-based embedded system and software to control arm movement was developed and deployed (Sherwood, 2001, Sherwood et al, 2012).

The New Instruments for Making Bottom Boundary Layer Evaluations (NIMBBLE) sleds were designed and built to measure bottom shear stress in 2014 for an experiment South of Martha’s Vineyard (https://soundwaves.usgs.gov/2014/10/fieldwork2.html).  These very low drag platforms support a pair of acoustic Doppler velocimeters (ADVs) that make rapid measurements of currents at two points that are about half a meter (a foot and a half) above the seafloor and separated horizontally by about a meter and a half (five feet).  These data are then used to compute turbulence and bottom stress. 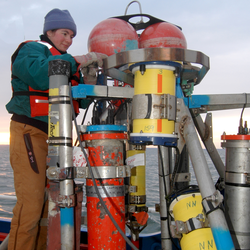 Coastal and Estuarine Dynamics Project exists to support ocean, coastal and estuarine research. The staff have a broad set of skills; from instrument design and development to all forms of work at sea to software development and data management. The team has successfully deployed and recovered more than 1000 data collection platforms for research in the last 30 years.
By
Natural Hazards, Coastal and Marine Hazards and Resources Program, Woods Hole Coastal and Marine Science Center
link
December 30, 2018

Coastal and Estuarine Dynamics Project exists to support ocean, coastal and estuarine research. The staff have a broad set of skills; from instrument design and development to all forms of work at sea to software development and data management. The team has successfully deployed and recovered more than 1000 data collection platforms for research in the last 30 years.
Learn More
link 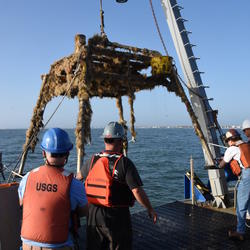