Understanding the Disease - Science in Support of One Health 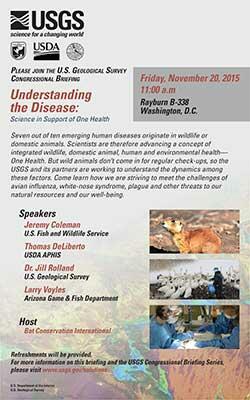 This year's theme is "Start with Science"

Understanding the Disease - Science in Support of One Health

Seven out of ten emerging human diseases originate in wildlife or domestic animals. Scientists are therefore advancing a concept of integrated wildlife, domestic animal, human and environmental health—One Health. But wild animals don't come in for regular check-ups, so the USGS and its partners are working to understand the dynamics among these factors.

Come learn how we are striving to meet the challenges of avian influenza, white-nose syndrome, plague and other threats to our natural resources and our well-being.

Dr. Jeremy Coleman is the National White-Nose Syndrome Coordinator and Northeast Regional Wildlife Disease Biologist for the U.S. Fish and Wildlife Service.  Jeremy has been working on white-nose syndrome (WNS) since 2008, and chaired the development of a US response plan for WNS.  He works with domestic and international partners to implement the collaborative response to WNS, and oversees annual research and state agency capacity grant programs that have provided over $24 million through 2015.  Recently Jeremy has also worked on responses to other emerging fungal pathogens that affect snakes and amphibians.  Jeremy holds a B.A. from Colgate University, and a M.S. and Ph.D. in wildlife ecology from Cornell University.

Dr. DeLiberto earned a BS in wildlife biology from Colorado State University, a MS in wildlife management from Texas Tech University, a PhD in rangeland management from Utah State University, and a. DVM from Washington State University. Tom currently serves as an Assistant Director for the National Wildlife Research Center, where he coordinates USDA Wildlife Services’ surveillance and research projects on diseases, chemistry, and economics. Dr. DeLiberto was one of the architects of the Wild Bird H5N1 Surveillance System in 2006 and of the current Wild Bird HPAI Surveillance Program, and serves on the Interagency Wild Bird HPAI Steering Committee. He represents APHIS and Wildlife Services on the Board of Directors for the US Animal Health Association, The White Nose Syndrome Executive Committee, the Wildlife Society’s Wildlife Disease Working Group, and on the Advisory Council for the American Association of Wildlife Veterinarians.

Dr. Jill Rolland - currently serves as the Director of the USGS Western Fisheries Research Center in Seattle. Prior to joining the USGS, Jill worked for the U.S. Department of Agriculture, Animal and Plant Health Inspection Service for ten years.  Initially she served as the aquatic animal health program manager and later as the Director of Aquaculture, Swine, Equine and Poultry Health Programs.  Jill has a B.S. in Fisheries from the University of Washington.  Jill has her masters and doctorate degrees in fish health from the University of Bergen, Norway.  Her research focused on transmission, hosts and reservoirs for the infectious salmon anemia (ISA) virus.

Larry Voyles, the Director of the Arizona Game and Fish Department, served as President of the Association of Fish and Wildlife Agencies (AFWA) 2014-2015.  Larry has worked for the Arizona Game and Fish Department for 40 years starting out as a District Wildlife Manager with responsibilities for wildlife management, fisheries management, public affairs and law enforcement at a district level.  After a decade in the field, Larry rose through the ranks serving as the Department’s Training Coordinator, Yuma Regional Supervisor and ultimately the position of Executive Director which he has held since 2008. Larry serves on a variety of boards including Chairman of the Board of Directors for the Council to Advance the Hunting and Shooting Sports, he represents the State Wildlife Agencies on the Wildlife and Hunter Heritage Conservation Council, AFWA Co-Chair of the Agency/Industry Coalition, the US Sportsmen’s Alliance Youth Program Advisory Council, and Western Association of Fish and Wildlife Agencies, Legal Committee (Chair).  He also sits on the Federal/State Joint Task Force for ESA Implementation and for Federal Aid Administration.