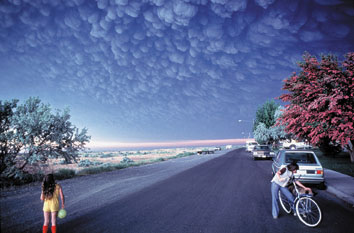 This surreal-looking photo shows an enormous cloud of volcanic ash approaching the small town of Ephrata, Washington, on the morning of May 18, 1980. The ominous eruption cloud was blown by 90-km per hour (60 mph) winds from Mount St. Helens, 230 km (145 mi) to the west. The volcano had begun to erupt explosively less than 3 hours earlier. An advancing eruption cloud often looks like an enormous dark thunderstorm cloud or menacing weather clouds. This cloud of ash caught many communities downwind unprepared for the rain of gritty ash that followed even though it was clearly visible. Only when the ash began falling did most people realize that the dark puffy cloud was not a weather cloud.