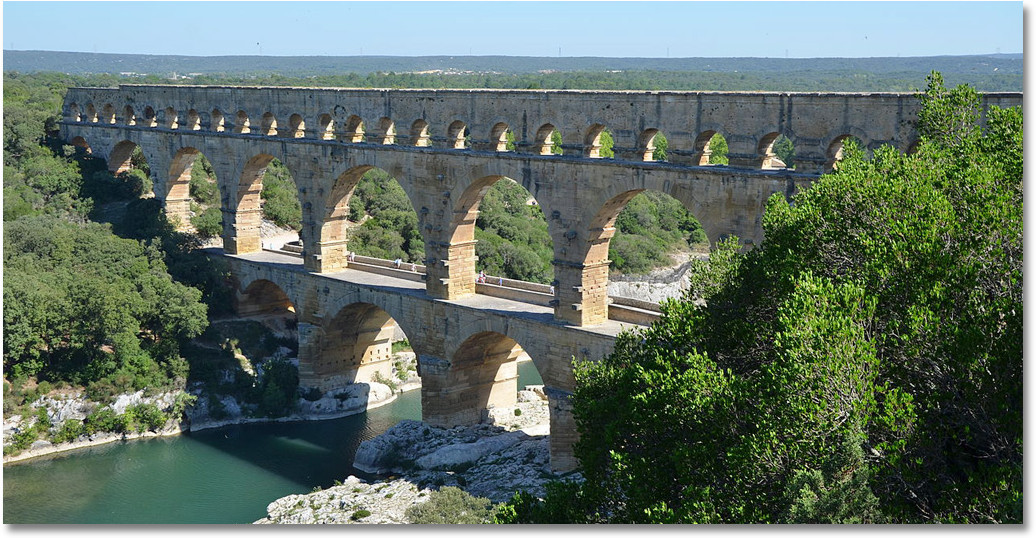 Here is a picture of the Roman aqueduct at Pont du Gard, crossing the Gard River in southern France. The aqueduct was used to supply water to the town on Nimes, which is about 30 miles from the Mediterranean Sea. Although the water ended up in the baths and homes in Nimes, it originated about 12 miles away in higher elevations to the north. The total length of the aqueduct was about 31 miles, though, considering its winding journey.

Aqueducts were not the Roman's choice for water-delivery systems, as they would use buried pipes when possible (much easier to bury a pipe than build an above-ground system). Although aqueducts use gravity to move water, the engineering feats of the Romans are shown in that the vertical drop from the highlands source to Nimes is only 56 feet. Yet, that was enough to move water over 30 miles. And, if you think you can see the aqueduct in this picture "leaning" to one side, it is a illusion, as the vertical drop is only 1 inch for the 1,500 foot length. It is estimated that the aqueduct supplied the city with around 200,000,000 litres (44,000,000 imperial gallons) of water a day, and water took nearly 27 hours to flow from the source to the city.