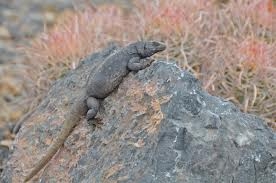 The Common Chuckwalla is primarily found across the Mojave and Sonoran deserts of the United States and Mexico, at elevations ranging from sea level to 1,370 m. This large (125–180 mm) lizard is dorsoventrally flattened and has wrinkles on its belly and neck. Chuckwallas are strongly associated with rock outcrops, lava flows, and boulder piles, and are well-known for their defensive behavior of inflating their bodies to wedge themselves in crevices. They are herbivorous, eating the leaves, flowers, and shoots of annual and perennial plants in the Mojave desert, and primarily perennial plants in the Sonoran desert. Preferred species of forage plants near Phoenix, Arizona, included mallows, desert lavender, America threefold, goldeneye, wolfberry, foothills palo verde, and ocotillo. Chuckwallas usually maintain active body temperatures between 35 and 40 degrees Celsius, yet wild individuals apparently obtain all of their water for metabolic needs from eating plants. Chuckwallas are long-lived and females may not breed every year. A clutch of 5–16 eggs is laid in mid to late summer, and hatchlings emerge in the fall, winter, or even the following spring. Although this species is common in many areas, in some locations excessive collecting and habitat destruction threaten population.