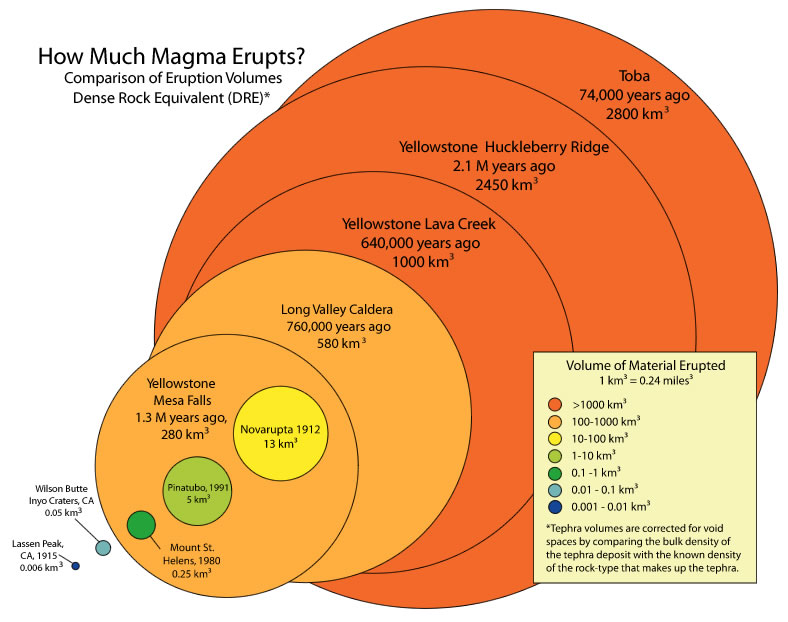 A widely accepted measure of the size of an eruption is the volume of lava ejected as pumice and ash (tephra) during an explosive phase or the volume of lava extruded during an effusive phase. Eruption volumes are commonly expressed in cubic kilometers (km3). One km3 is roughly equivalent to 0.24 cubic mile. Estimates of the tephra volumes are usually obtained by mapping the distribution and thickness of the tephra deposits on the ground after the eruption is over. Tephra volumes measured in this way must then be corrected for void spaces (bubbles within the pumice, empty spaces between individual chunks of pumice or ash) to get an estimate of the original volume of lava erupted. This correction can be made by comparing the bulk density of the tephra deposit with the known density of the rock-type that makes up the tephra. The result is referred to as the "dense rock equivalent" or DRE of the erupted volume. The diagram shows sizes of a few example eruptions. In any given time period, there are many more small eruptions than there are large eruptions and the largest caldera-forming eruptions (Long Valley Caldera, Yellowstone, and Toba) are very infrequent. The smallest eruption shown is the 1915 Lassen Peak eruption with an estimated DRE volume of 0.006km3. The largest eruption shown is the 74,000 years ago Toba eruption in Sumatra with a DRE volume was about 2,800 km3. The eruption sizes were drawn by solving for the radius of a sphere using the eruption volumes shown.