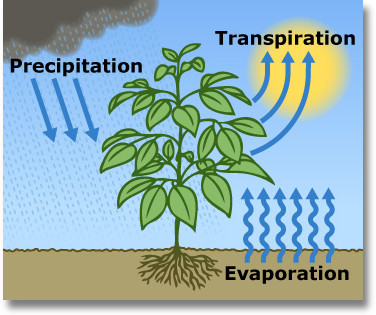 Evapotranspiration: What it is and why it's useful

The typical plant, including any found in a landscape, absorbs water from the soil through its roots. That water is then used for metabolic and physiologic functions. The water eventually is released to the atmosphere as vapor via the plant's stomata — tiny, closeable, pore-like structures on the surfaces of leaves. Overall, this uptake of water at the roots, transport of water through plant tissues, and release of vapor by leaves is known as transpiration.

Water also evaporates directly into the atmosphere from soil in the vicinity of the plant. Any dew or droplets of water present on stems and leaves of the plant eventually evaporates as well. Scientists refer to the combination of evaporation and transpiration as evapotranspiration, abbreviated ET. This parameter is widely cited because it approximates the consumptive use of a landscape’s plants.