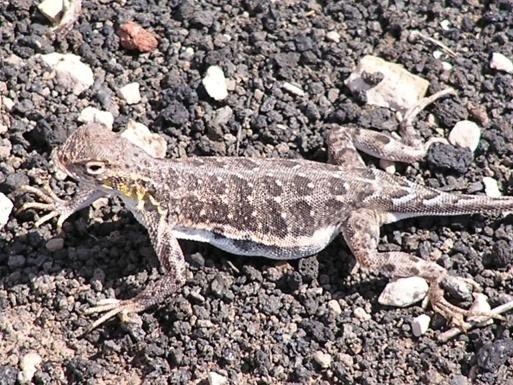 The lesser earless species complex is found across short-grass prairie and open habitats of the southern Colorado Plateau, New Mexico, Texas, northern Mexico, and on the western edge of the Great Plains, at elevations ranging from 500 to 2,200 m. The taxonomy of this wide-ranging species has been debated; in our modeling, we did not include museum records in the current range of H. elegans. While vegetative habitat types vary, generally this small lizard is found in areas with sandy or loose gravel-covered soils suitable for burrowing, in flats or grasslands. These small, short-lived diurnal lizards are primarily insectivorous, but adults also may eat hatchling lizards. Mating occurs from May to July, and females typically lay one or two clutches of four to six eggs each per year, with hatchlings emerging between July and early fall. The species is of conservation concern because of extensive habitat loss that has occurred across its former range; in many areas this has been a result of habitat conversion following overgrazing by cattle and sheep.