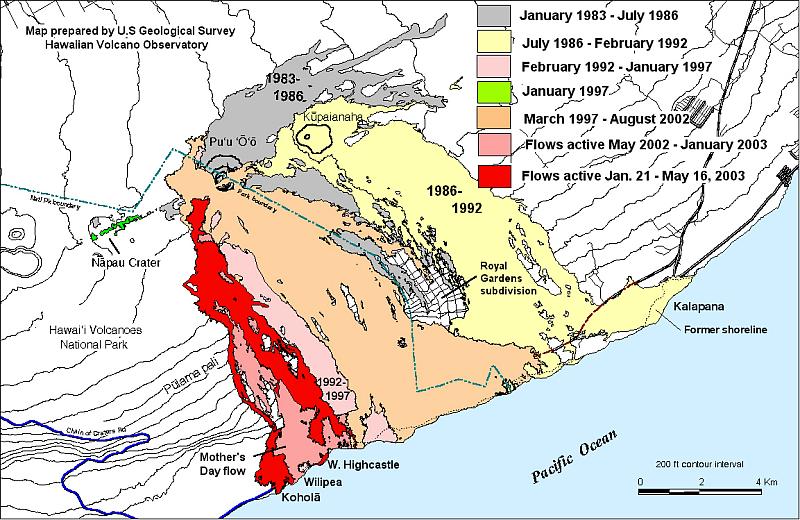 Map shows lava flows erupted during 1983-present activity of Pu`u `O`o and Kupaianaha. Red colors, both dark and light, denote Mother's Day flow, which began erupting on May 12, 2002 and continues to the present. The darkest color represents flows active since January 21, 2003.

Most recent--and ongoing--activity has produced two flows, one along western edge of flow field and one slightly farther east. Kohola flow, along western margin, entered sea late on Valentine's Day to form short-lived Kohola ocean entry. This flow shortened the road still more. Visitors now can drive to Holei Sea Arch, 1.1 km from Kohola flow, and walk to see flow. Breakouts have been visible in various parts of Kohola flow, shifting from time to time across width and length of flow.

Other dark red flow is main active part of Mother's Day flow. Fed by breakouts from lava tube in main Mother's Day flow, it advanced along eastern margin of main flow and down Pulama pali and Paliuli. Western of two forks below Paliuli dripped over sea cliff at Highcastle on May 19, 2003, after map was made.

Lava from earlier, pre-January 21, 2003 Mother's Day flow (light red) reached sea at West Highcastle early on July 19, at Wilipe`a early on July 21, and at Highcastle on August 8. From near southwest base of Pu`u `O`o, Mother's Day flow passes along west side of flow field and into forest, where it started large wildfire in May that continued into late July. By June 10, Mother's Day flow had reached base of Paliuli, the steep slope and cliff below Pulama pali and just above coastal flat. At base of Paliuli, Mother's Day flow abruptly spread laterally in series of small budding flows to cover an area nearly 2 km wide, gradually moving seaward until West Highcastle and Wilipe`a lobes finally reached water and started building lava deltas. Activity at West Highcastle ended in early August, but entry began soon thereafter at Highcastle, eventually burying tiny kipuka of Chain of Craters Road. Wilipe`a entry died away slowly and had ended by mid-August. Highcastle and neighboring Highcastle Stairs entries ended on about August 23. For a time there were no active entries. Then Wilipe`a was reactivated on September 3 but stopped in December. West Highcastle likewise renewed activity on September 16-17, died away during night of September 18-19, and returned soon thereafter to continue through March 21. East arm of Mother's Day flow branched from Highcastle lobe in late October and sent three fingers into ocean at Highcastle on November 15, West Lae`apuki on November 19, and Lae`apuki on November 20. Lae`apuki entries had stopped by November 29. If this sounds like soap opera, the truth is even more confusing than the simplified version of activity given here.