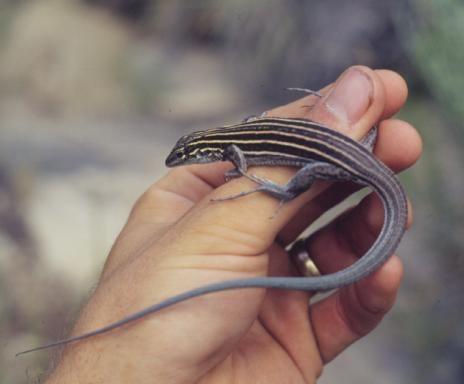 The plateau striped whiptail lizard species complex inhabits a variety of grassland and scrub and shrub habitats on the Colorado Plateau and in central New Mexico, at elevations ranging from 1,400 to 2,440 m. This is a medium-sized (70–90 mm) all-female species. Unisexual whiptails reproduce by parthenogenesis, in which unfertilized eggs hatch into clones of the mother. Adults live for at least 4–5 years. Adults are typically active between May and mid-September while juveniles are active later into the fall. Female Plateau Striped Whiptails lay three to five eggs in June, and hatchlings emerge between July and September. Whiptail lizards are actively-foraging diurnal insectivores known for running after insect and hatchling lizard prey, and typically maintain body temperatures around 38 degrees Celsius when active. Where present, individuals of Plateau Striped Whiptails are usually abundant. Given their size and unisexual reproductive mode, they may create significant competition for prey where they co-occur with bisexual whiptail and other lizard species.