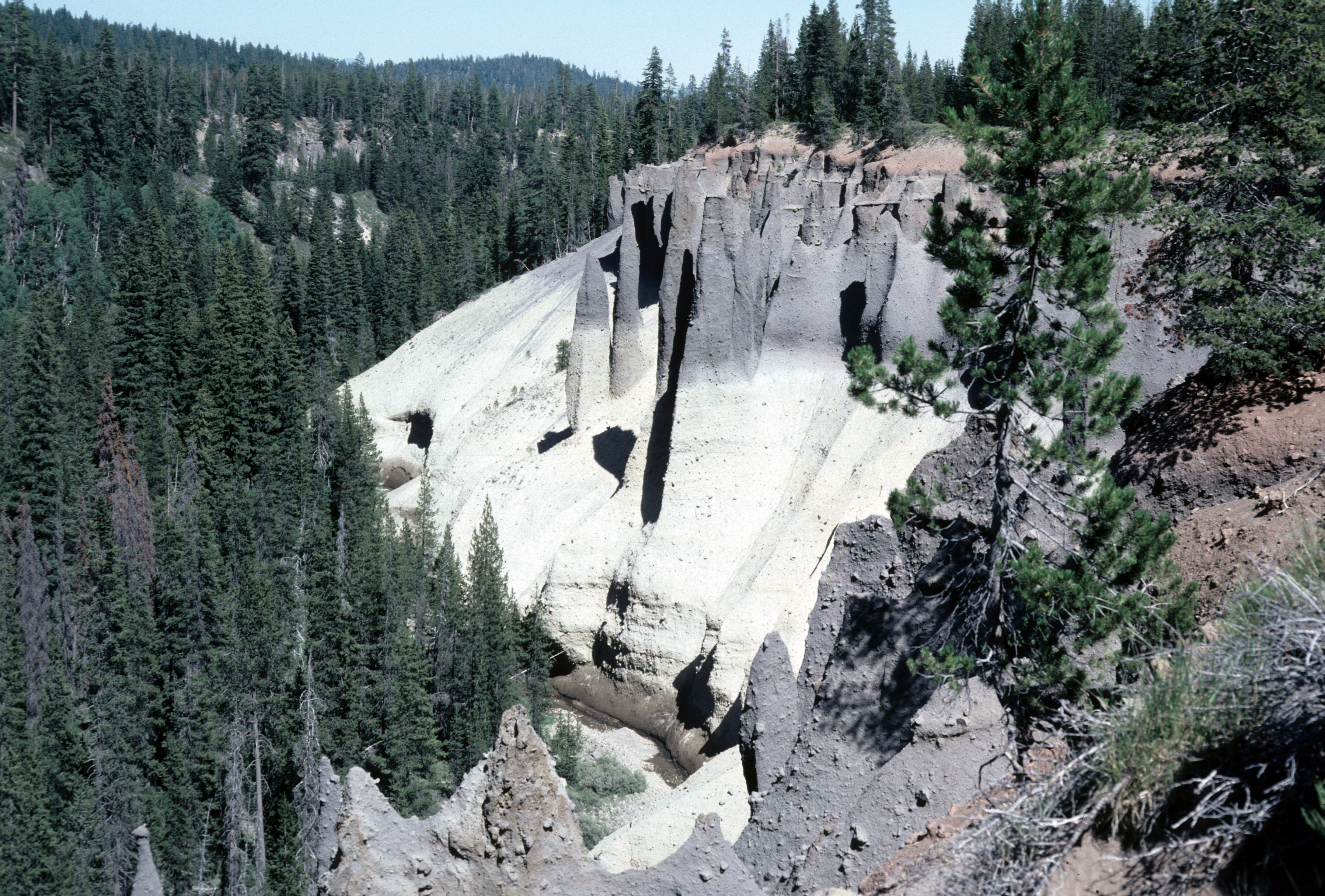 These pyroclastic-flow deposits of the climactic eruption of Mount Mazama, during which Crater Lake caldera formed, are eroded into spectacular spires at The Pinnacles on Wheeler Creek. The deposit, here about 100 m thick, accumulated as a stream of hot pyroclastic flows carrying melon-sized pumice blocks and fine ash particles descended from Mount Mazama over the course of a few hours about 7,700 years ago. The magma chamber that supplied the eruption was zoned in composition from silica-rich rhyodacite down into more iron- and magnesium-rich andesite. This resulted in the first-erupted and deposited material being light colored and later-erupted magma being dark. In other words, the color layering in the pyroclastic-flow deposit can be thought of as an inverted view of the pre-eruption layering in the magma chamber below where Crater Lake caldera collapsed. In detail, the pumice blocks in the deposit, which represent samples of frothed magma, are virtually all rhyodacite in the bottom third of the exposure. The pumice blocks are a mixed population of rhyodacite and andesite in the middle third, and are dominantly andesite (and some very crystal-rich, more mafic compositions) in the top third. The fine ash matrix that is responsible for the gross color of the deposit darkens upward partly owing to composition and partly to greater heat retention of the later-emplaced material as the eruption was waning. The retention of heat resulted in crystallization of tiny iron oxide mineral grains that impart a gray color to the volcanic ash. As the deposit cooled, gases escaped from within it in open fractures that narrowed into tubes upward, resulting in growth of new gas-deposited minerals in the pore spaces between particles. This cemented "tuff" is more resistant to erosion by water and wind than the surrounding deposit so that, in time, the pinnacles stand out as spires. The red band at the top of the bluff is fine ash in which the iron oxidized in contact with the atmosphere as the deposit cooled.