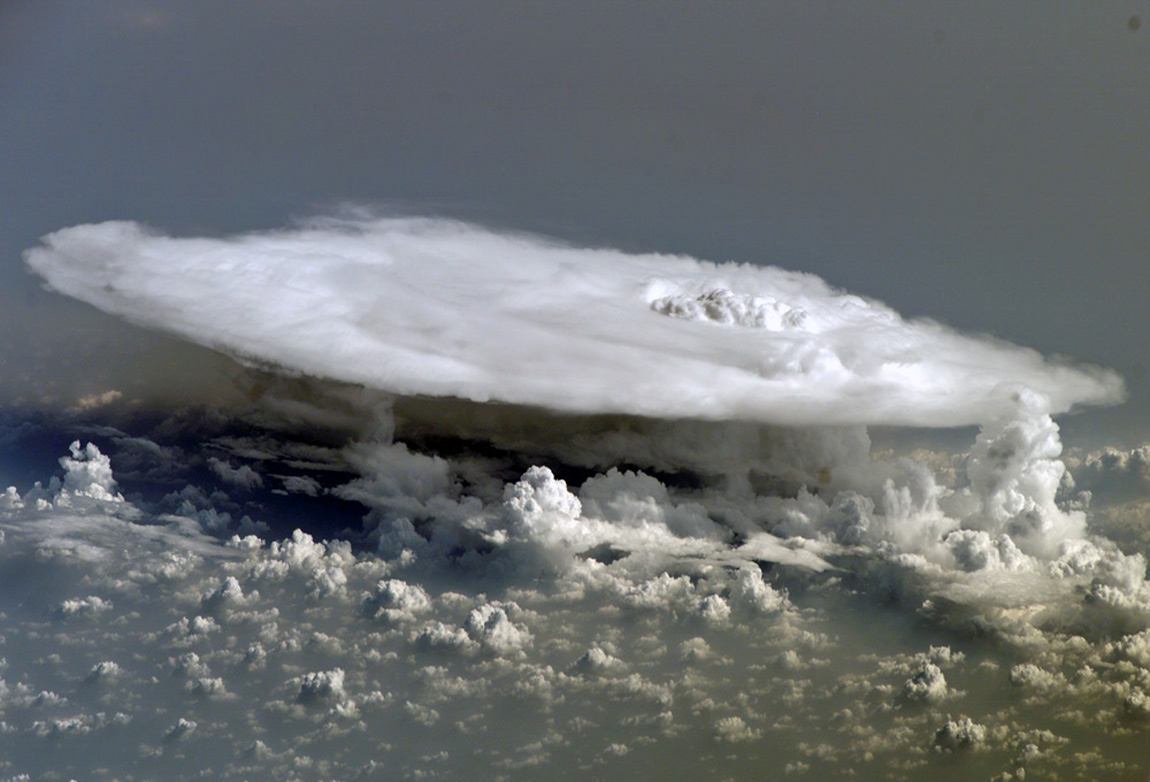 This picture shows cumulonimbus clouds over Africa photographed from the International Space Station. Cumulonimbus (from the Latin for "puffy" and "dark") clouds form due to vigorous movement of warm and moist unstable air. Rising air currents containing water vapor and varying layers of differing-temperature air in the upper atmosphere result in these dramatic cloud formations. For a detailed explanation, from NASA, about the cloud formations in this picture refer to the text below the picture.

Surface air warmed by the sun-heated ground surface rises, and if sufficient atmospheric moisture is present, water droplets will condense as the air mass encounters cooler air at higher altitudes. The air mass itself also expands and cools as it rises due to decreasing atmospheric pressure, a process known as adiabatic cooling. This type of convection is common in tropical latitudes (as in this picture) year-round and during the summer season at higher latitudes. As water in the rising air mass condenses and changes from a gaseous to a liquid state, it releases energy to its surroundings, further heating the surrounding air and leading to more convection and rising of the cloud mass to higher altitudes. This leads to the characteristic vertical "towers" associated with cumulonimbus clouds, an excellent example of which is visible in this image.

If enough moisture is present to condense and continue heating the cloud mass through several convective cycles, a tower can rise to altitudes of approximately 10 kilometers at high latitudes to 20 kilometers in the tropics -- before encountering a region of the atmosphere known as the tropopause. The tropopause is characterized by a strong temperature inversion where the atmosphere is dryer and no longer cools with altitude. This halts further vertical motion of the cloud mass, and causes flattening and spreading of the cloud tops into an anvil-shaped cloud as illustrated by this oblique photograph. The view direction is at an angle from the vertical, rather than straight "down" towards the Earth's surface. The image, photographed while the International Space Station was passing over western Africa near the Senegal-Mali border, shows a fully-formed anvil cloud with numerous smaller cumulonimbus towers rising near it. The high energetics of these storm systems typically make them hazardous due to associated heavy precipitation, lightning, high wind speeds and possible tornadoes.