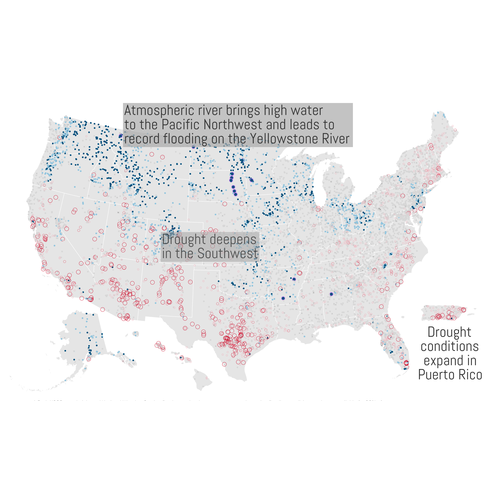 This is a thumbnail from a video animation showing the changing conditions of USGS streamgages from April 1, 2022 to June 30, 2022. The river conditions shown range from the driest condition seen at a gage (red open circles) to the wettest (blue closed circles). A purple outer ring around a gage indicates it is flooding.

Drought in the West continued from the previous quarter and deepened in the Southwest throughout April, May, and June. Rain brought high water to Eastern and Southern states throughout April. As May began, the Midwest saw high water while the Mid-Atlantic experienced a dry period. A combination of rain and snowmelt during mid-May brought high water and flooding to parts of the Upper Midwest, particularly North Dakota, South Dakota, and Minnesota. At the end of May, New England experienced another dry period that extended into June. In the Pacific Northwest, an atmospheric river brought high water and lead to record flooding on the Yellowstone River between June 13 and 15. Drought conditions in Puerto Rico persisted throughout the quarter with increasing intensity in June. As June came to a close, lowflow conditions expanded across the Nation.