Hot off the Press! Great Balls of Fire!

Move over Pokémon Go. Researchers at the University of Nebraska-Lincoln (UNL) have developed a steamy HOT drone prototype that drops ping pong-sized balls filled with combustible material that ignites fires as part of prescribed fire management.

Watch video about the project: https://www.youtube.com/embed/GYJF-k8enz0

The U.S. Forest Service has been exploring Unmanned Aerial Systems (UAS) to reduce the costs and risks tied to fire monitoring and has worked extensively with the federal Aviation Administration and fire agencies for approvals.

The advances in UAS technology is a way to expand many benefits identified for monitoring wildfire behavior, weather conditions, and smoke to prescribed burning operations, Allen and other researchers noted in a publication released this week in Frontiers in Ecology and the Environment.

“We envision a future where a swarm of autonomous and interacting UAS carries out fire management operations, reducing risks and costs while enhancing capabilities in both wildfires and prescribed fires,” Allen and his coauthors wrote.

Additionally, fire management professionals balance the need to control wildfires to protect lives and property, while also starting prescribed fires to maintain fire-dependent ecosystems and to reduce the size of, and occurrence of, wildfires. Yet, despite good intentions and billions of dollars invested, large wildfires are becoming common.

Current fire management techniques are no match for the challenges requested of fire managers, and new innovations are needed. Fire management teams across the world are beginning to explore the potential of UAS for monitoring fires as one avenue of technological innovation.

Hot on the Trail -- From Design to Testing

Currently, controlled burns are started by hand or helicopters that drop delayed ignition balls, a process that can be dangerous and is costly. The UAS prototype, however, sets the stage for remote operation for igniting controlled burns with improved characteristics (e.g. greater flight range or payload size).

The prototype designed by the UNL team is small, fast, and portable. In a controlled setting on the UNL campus, the prototype robot took flight while the cargo fed balls into a chute. Each ball was rotated and injected with alcohol to start a chemical reaction before being dropped to the ground. Seconds later, the ball ignited.

"UNL is pioneering the merging of two, highly regulated, and rapidly evolving technology fields: fire and unmanned aviation," Sebastian Elbaum, Professor in the Science and Engineering Department at the University of Nebraska said.

The research benefits graduate students--James Higgins of the NIMBUS Lab says, “It’s fun to see the design go from concept to computer--build phase to physical testing.” A key design challenge, Higgins noted, was developing the software systems, electronics, and mechanical systems to fit in a small space, and yet be able to be moved and operated safely in harsh fire conditions.

Strike While the Iron is Hot -- Smokey Comes of Age

Prescribed burning is a conservation tool that keeps many ecosystems healthy, including the Great Plains. “In the absence of fire what we see are invasions of eastern red cedar and as a result, major changes in livestock production potential in these landscapes, grassland birds, and endangered species,” says Dirac Twidwell, assistant professor and a rangeland ecologist at UNL. 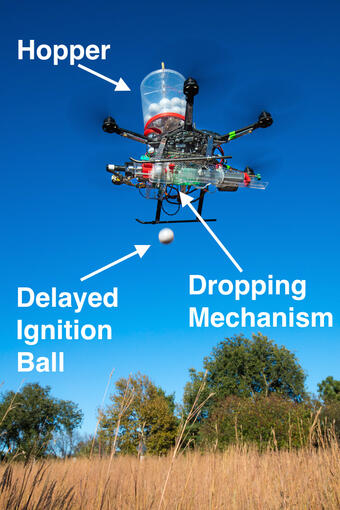 Lead author Twidwell emphasizes that the research, published this week in Frontiers in Ecology and the Environment, Ecological Society of America, demonstrates the great potential UAS technologies have to benefit fire management activities with less risk to firefighters and usually less costly to boot.  For example, the authors of the study noted that manned aviation-related fatalities account for 26 percent of all firefighter deaths in the United States since 2000. Wildfire tragedies, such as the Yarnell Hill Wildfire in Arizona, USA, that killed 19 elite wildland firefighters, have heightened awareness regarding the risks to suppression crews.

There are potential benefits of, but also barriers to, applying UAS technology for wildfire management and the conservation of fire-dependent ecosystems.

Catching Fire, Not the Hunger Games

In the future, said Allen and his co-authors, aerial robots or drones could help local and national agencies monitor and protect forests and rangeland from fires. More revisions are needed, but Nebraska researchers hope the innovation will spread as an alternative for range management of fires. "We see a lot more interesting research ahead in terms of further automation and safety," Detweiler said.

Before, during and after wildfire disasters, the USGS provides tools to identify wildfire risks and reduce subsequent hazards, such as landslides. As fires are contained, USGS scientists help to assess their aftermath to guide the re-building of more resilient communities and restoration of ecosystems.

This future vision includes using UASs as integral management components of the world’s most fire-dependent ecosystems, such as the Great Plains in North America or the Serengeti in East Africa.

U.S. Department of the Interior Office of Aviation Services: https://www.doi.gov/aviation