The earthquake occurred about 20 miles southwest of Smith Valley, NV. Perceived shaking for the quake was very strong. The event was widely felt, with over 25,000 "Did You Feel It?" reports thus far submitted. The quake is a result of normal faulting at approximately 6.2 miles (10 km) depth near the Antelope Valley fault, which runs north-south along the Sierra Nevada range front.

USGS scientists expect that this event will trigger aftershocks, but these will decrease in frequency over time. See the aftershock forecast for details.

The USGS is coordinating its response with the California Geological Survey and the University of Nevada at Reno.

The ShakeAlert Earthquake Early Warning System detected the earthquake 25.6 seconds after it started, but under-estimated the magnitude as a M4.8 at an estimated location that was about 31 miles (50 km) south of the ​actual location. The system initially thought it was detecting three different smaller earthquakes rather than one larger one. With relatively few seismic stations in this part of California, earthquake waves have to travel further to be detected. This can cause issues like inaccurately locating and miscalculating the quake. As the USGS builds more stations, it expects to see ​most of these issues resolved. The system is constantly growing and learning from events like these.

ShakeAlert Messages were distributed via app partners for the inaccurately located M4.8 (near Stockton) that occurred as shaking from the M6.0 travelled across the state. App providers, including MyShake, and QuakeAlertUSA, as well as Google Android have an alerting threshold of M4.5. The apps also sent alerts for a M4.6 aftershock at 23:33 UTC (4:33 pm local time) that was correctly located.

The Wireless Emergency Alert system did not distribute alerts for the earthquake because the underestimation of the quake meant it did not reach the system's threshold of alerting for earthquakes that are M5.0 or stronger.

If you felt this earthquake, report your experience on the “USGS Did You Feel It?” website for this event.

The USGS operates a 24/7 National Earthquake Information Center in Colorado that can be reached for more information at 303-273-8500. Visit the @USGS_Quakes and @USGS_ShakeAlert Twitter accounts for the latest updates.

Learn more about the USGS Earthquake Hazards Program and ShakeAlert.

We will update this story if more information becomes available. 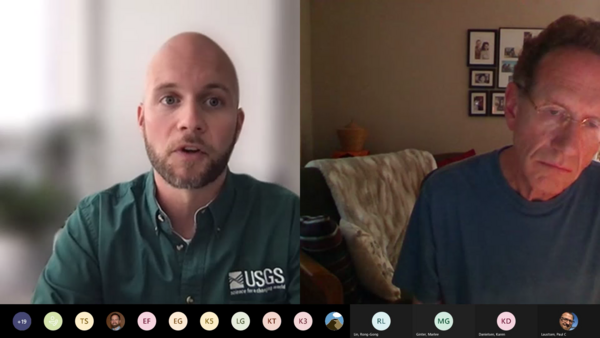