Dr. Steve Ingebritsen retires this week from the USGS after a stellar career spanning four decades. 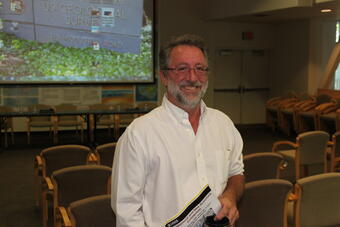 Steve’s research covered a broad spectrum of problems but mainly focused on the role of groundwater in geological processes and on heat and mass transport in volcanic and geothermal systems. His research was conducted in locations like Mount Lassen (where he conducted research for his Masters degree), the Cascades Range, Hawaii, Alaska, Yellowstone and Japan.

Many of his publications had a critical influence on the understanding of a wide range of processes. Steve’s seminal research on permeability in Earth’s continental crust led to a book titled Crustal Permeability. His studies characterized the variation of permeability as a function of depth in Earth’s crust and reveal a consistent trend that extends across geological settings. His later analysis demonstrated how crustal permeability changes in response to tectonics, fluid production, and chemical reactions. His papers contributed to an improved understanding of geothermal energy resources, the genesis of ore deposits, groundwater withdrawal and the resulting land subsidence, and the assessment of volcano and earthquake hazards. The computer code USGS-HYDROTHERM that he co-developed is used worldwide, and the textbook he wrote, Groundwater in Geologic Processes, won several awards and has been adopted at many universities.

Steve dedicated significant part of his career to service. He served on many Department of Energy policy committees, in USGS leadership roles including chief of the Western Region Branch of the National Research Program and chair ofthe USGS Council of Senior Science Advisors (COSSA). He edited for several science journals, sat on professional society committees, and co-founded and hosted the annual Hubbert Quorum on crustal fluids. Steve has also been a superb mentor to young scientists in the USGS and academia and advised many postdocs and graduate students, formally and informally.

Steve’s impactful work has been recognized by numerous awards. These include his election to the National Academy of Engineering and a Fellow of the Geological Society of America and the American Geophysical Union. He also received the John Hem Excellence in Science and Engineering Award from the National Ground Water Association, the O.E. Meinzer Award and the Birdsall-Dreiss Distinguished Lectureship from the Geological Society of America, and the Department of Interior Superior and Meritorious Service Awards.

Although Steve's formal tenure at the USGS is ending, fortunately he is planning to return as an emeritus scientist and will continue his research. Thank you, Steve for your leadership, your friendship and for your incredible contributions to the USGS and to the scientific community.