California Water Use Estimates for 2010 Released

About 38 billion gallons per day (42,000,000 acre-feet per year) of water were withdrawn from groundwater and surface-water sources in California in 2010, according to a new U.S. Geological Survey dataset. 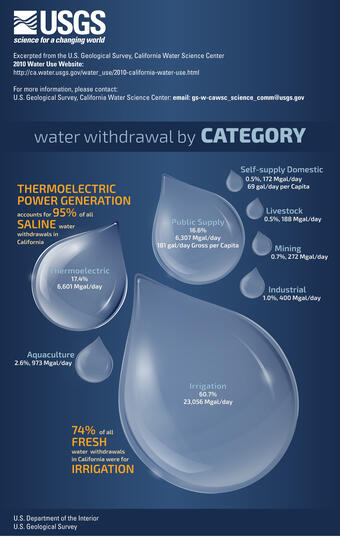 SACRAMENTO, Calif. – About 38 billion gallons per day (42,000,000 acre-feet per year) of water were withdrawn from groundwater and surface-water sources in California in 2010, according to a new U.S. Geological Survey dataset, which is now available online. To put the quantity in perspective, this daily amount is equivalent to draining Lake Shasta, California’s largest reservoir, at full capacity about once every 40 days. The site shows water-use estimates based on source type (surface water vs. groundwater, and fresh vs. saline water) and withdrawal category, including irrigation, public supply, and thermoelectric. Estimates are provided for individual counties and for the entire state.

"The current drought in California has increased demand for these data," said USGS California Water Science Center Director, Eric Reichard. "This information is critical for managers and planners to understand how factors such as population, industry, crops, energy production and climate affect water withdrawals."

Since 1950, the USGS has compiled and published national water-use estimates every five years. In response to increased interest associated with current drought conditions, the 2010 water-use estimates for California have been released prior to other state or national water-use publications, which are expected to be published in late 2014. The delay between data collection and release is due to the time it takes to compile data from many sources and assure its quality.

Water-withdrawal estimates are provided for individual counties and for the entire state by source type and by category, following the USGS National Water-Use Information Program guidelines.  The USGS California Water Science Center is responsible for determining the most reliable sources of data, compiling and analyzing those data, estimating missing data, and preparing documentation of the sources and methods used to estimate water use for California.

These estimates provide a snapshot of water use in 2010.  The quantification of water use provides a baseline for assessing the interrelationship between factors such as demographics, land use, irrigation practices, climate, economics, and legal decisions, and water availability.  These water-use estimates are important inputs to hydrologic models that are used for water resource planning and management.

A water-use trends analysis will be provided on the web site at a future date, but in general a comparison with previous compilations indicates that overall withdrawals increased from 1950 to 1980 as population more than doubled, but have generally declined since 1980, even though the State’s population has increased by more than 50% since then.

In California, as in other states, there are uncertainties associated with estimating some of the water use components. The biggest uncertainties for California are associated with irrigation water use. The quantity of groundwater pumped for irrigation is generally not measured, and surface-water diversion data, particularly at the county level, are incomplete or only available at scales different from those used in this study. Therefore, irrigation water use must be estimated using crop coefficients generated from crop evapotranspiration models that compute water requirements, and from reported irrigation crop acreages.

The USGS’s National Water-Use Information Program is responsible for compiling and disseminating the nation's water-use data. The USGS works in cooperation with local, state, and federal environmental agencies to collect water-use information and compiles these data to produce water-use information aggregated at the county, state, and national levels. Every five years, data at the county level are compiled into a national water-use data system and state-level data are published in a national circular.

The downloadable dataset is available online.