The American oystercatchers studied on Cape Lookout National Seashore in North Carolina were disturbed more by pedestrians and off-road vehicles passing their nests than the U.S. military aircraft flying overhead.

The American oystercatchers studied on Cape Lookout National Seashore in North Carolina were disturbed more by pedestrians and off-road vehicles passing their nests than the U.S. military aircraft flying overhead.

A new U.S. Geological Survey study published in the journal Ibis indicates that American oystercatchers, a bird species of special concern in North Carolina and in other Atlantic states, are more likely to leave their nests when vehicles and pedestrians pass them than when military aircraft fly overhead at altitudes of about 3000 feet.

Researchers from the USGS North Carolina Cooperative Research Unit studied incubation behavior and nesting success by conducting 24-hour video and audio recording at nests during 2010 and 2011. The focus of the research, conducted at the request of the U.S. Marine Corps, was to determine if military overflights affected the nesting behavior of the birds. 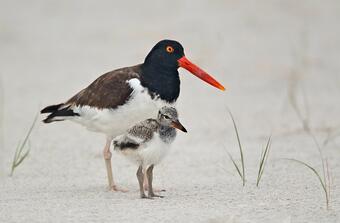 "We found no association between military aircraft overflights, incubation behavior, and Oystercatcher reproductive success," said Ted Simons, coauthor on the project. “However, Oystercatchers were on their nests significantly less when off road vehicles and pedestrians passed by their nests, and the number of vehicles passing nests during incubation was associated with significant reductions in daily nest survival.”

“Our findings indicate that management of vehicles and pedestrians in the areas where oystercatchers breed is important for the conservation of the species,” said Simons.

The American oystercatcher is a large, boldly patterned shorebird that nests along ocean shores and salt marshes from Nova Scotia to Mexico. The birds are common nesters throughout Cape Lookout National Seashore, primarily on the ocean beach.

They lay their eggs in a simple depression in the ground which makes the birds vulnerable to disturbance during the 27 days that they incubate their eggs. As their name foretells, they specialize in feeding on oysters, clams, and mussels that they extract with their brightly-colored bills.

“As coastal areas often experience heavy human use, beach-nesting animals, such as American oystercatchers, can be quite vulnerable to disturbance from human activities,” said Tracy Borneman, lead author and a graduate student at North Carolina State University at the time of the study. “Although aircraft don’t seem to disturb the oystercatchers, vehicles appear to play a role in altered breeding behaviors and breeding success, making this a focus of further investigation.  We are currently conducting research utilizing more controlled experiments of vehicle driving in oystercatcher nesting areas to more rigorously assess effects.”